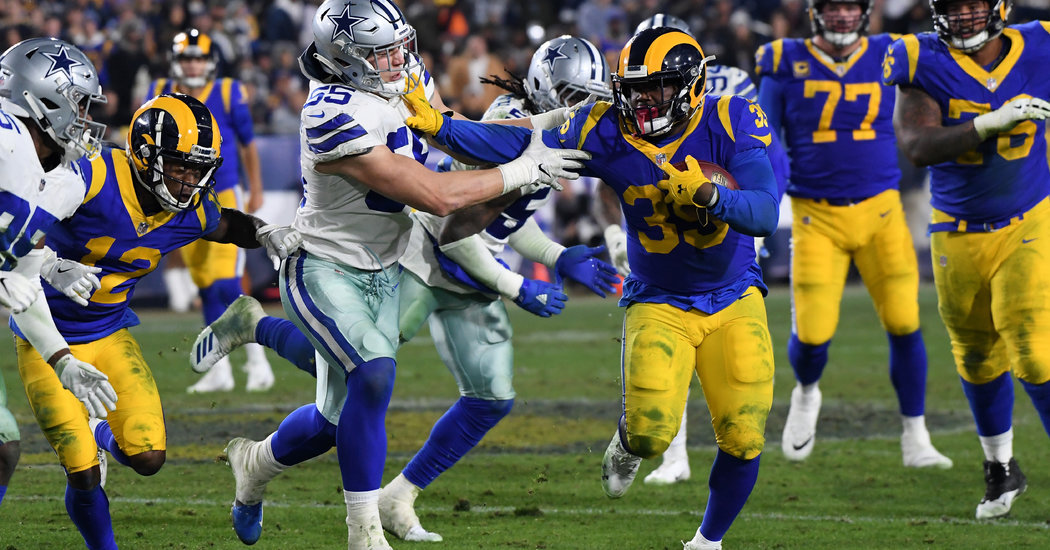 Rams Land a Devastating 1-2 Punch in the N.F.L. Playoffs

LOS ANGELES — C.J. Anderson has accomplished a good deal as a running back in the N.F.L. He rushed for more than 1,000 yards last season. He was a Pro Bowl selection in 2014, and a Super Bowl champion with the Denver Broncos. But the past nine months have been a different experience for him altogether.

Since April, three teams have released him: the Broncos, the Carolina Panthers and the Oakland Raiders, who waived him in December without giving him a single carry. The Raiders, it should be noted, were atrocious this season.

“It’s how you handle things,” Anderson said. “I always just kept my head down and kept pushing.”

A new opportunity for him materialized last month when the Rams signed him as something of a stopgap measure. Todd Gurley II, their star running back, was sidelined with a knee injury, and Anderson suddenly found himself on the field for one of the best teams in the league. So he took the ball and rumbled with it, and he has been bulldozing defenders ever since.

On Saturday night, Anderson paired with Gurley to form a punishing one-two running attack as the Rams advanced to the N.F.C. Championship Game with a 30-22 victory over the Dallas Cowboys. Anderson rushed for 123 yards on 23 carries, and Gurley finished with 115 yards on 16 carries. They also combined for three touchdowns, and whomever the Rams face next weekend — the Philadelphia Eagles or the New Orleans Saints — will need to concoct some sort of recipe to neutralize two runners with different styles.

“Having both of them is special,” the quarterback Jared Goff said, “because it gives you a real dual threat of backs.”

Gurley, a three-time Pro Bowl selection who rushed for 1,251 yards during the regular season, has speed and savvy, with an ability to bounce to the outside. Anderson, on the other hand, is not a sculpted piece of clay. He has curves, a runner who resembles Jerome Bettis more than he does Eric Dickerson. But if his center of gravity were any lower, he would be underground, and he bursts through the line of scrimmage like the Kool-Aid Man.

Together, they made the Cowboys look hapless — a stunning turn of events for a defensive unit that had, only a week earlier, limited the Seattle Seahawks and their top-ranked running game to 73 yards in the wild card round.

Now, the Rams, in just their third season back in Los Angeles after bolting from St. Louis, are one win from the Super Bowl.

“To be able to even play for a Super Bowl is crazy, man,” Gurley said. “It’s crazy. I can’t even really explain it right now.”

Gurley and Anderson did their handiwork behind the best offensive line in the league, and they were both quick to credit their teammates for creating massive seams in Dallas’ defense. Gurley, for example, was asked to detail what had transpired on his 35-yard touchdown run in the second quarter.

Even Goff, a talented young passer, got involved in the ground game, scrambling for an 11-yard run on third-and-7 late in the fourth quarter to help seal the win.

Gurley, who tore the anterior cruciate ligament in his left knee as a college junior at Georgia in 2014, missed the final two games of the Rams’ regular season with left knee inflammation. If the injury was a concern for the Rams at the time, it turned out to have been beneficial in a couple of ways.

First, Gurley had nearly a month to recuperate and recharge. Ahead of Saturday’s game, some of his teammates said they could sense that he looked fresh — and a fresh Gurley is a dangerous Gurley. (For his part, Gurley said he “would’ve been fresh” for the playoffs no matter the circumstances.)

Second, Gurley’s absence late in the regular season meant that the Rams had to add another running back to the roster. Enter Anderson.

“I guess it was a good thing I got hurt, you know?” Gurley said.

In the two games that Gurley missed, Anderson made an impression, rushing for 167 yards against the Arizona Cardinals and another 132 yards against the San Francisco 49ers, both wins. Coach Sean McVay made the transition look almost seamless.

“I think it’s a testament to the maturity of our offense that we had somebody new come in and welcomed him with open arms so that he could come in and produce the way he could produce,” the left guard Rodger Saffold III said. “But I also think it’s a credit to C. J. that he could come in and understand the offense within four days. And it’s not just any offense; it’s McVay’s offense. There are a lot of words and a lot of categories and a lot of switches, and there are long, long plays.”

Before Saturday’s game, Anderson saw Peyton Manning, the retired quarterback. Seeing Manning, Anderson said, reminded him of conversations they had when they were teammates with the Broncos. Anderson recalled how Manning once told him how difficult it had been for him when the Indianapolis Colts released him.

Anderson can relate now more than ever.

“He felt he could still play,” Anderson said, “and he came to Denver and lit it up. It kind of feels like that. Everybody has a turn, and it was my turn this year.”