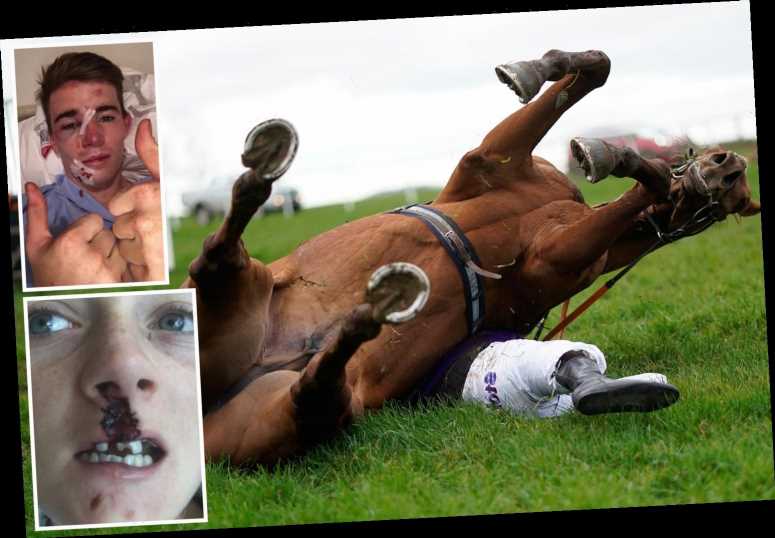 EVERYONE knows jockeys are among the toughest athletes around.

You have to be to put your life in the hooves of a 500kg animal that hurtles round a bending racetrack at speeds of up to 40mph. 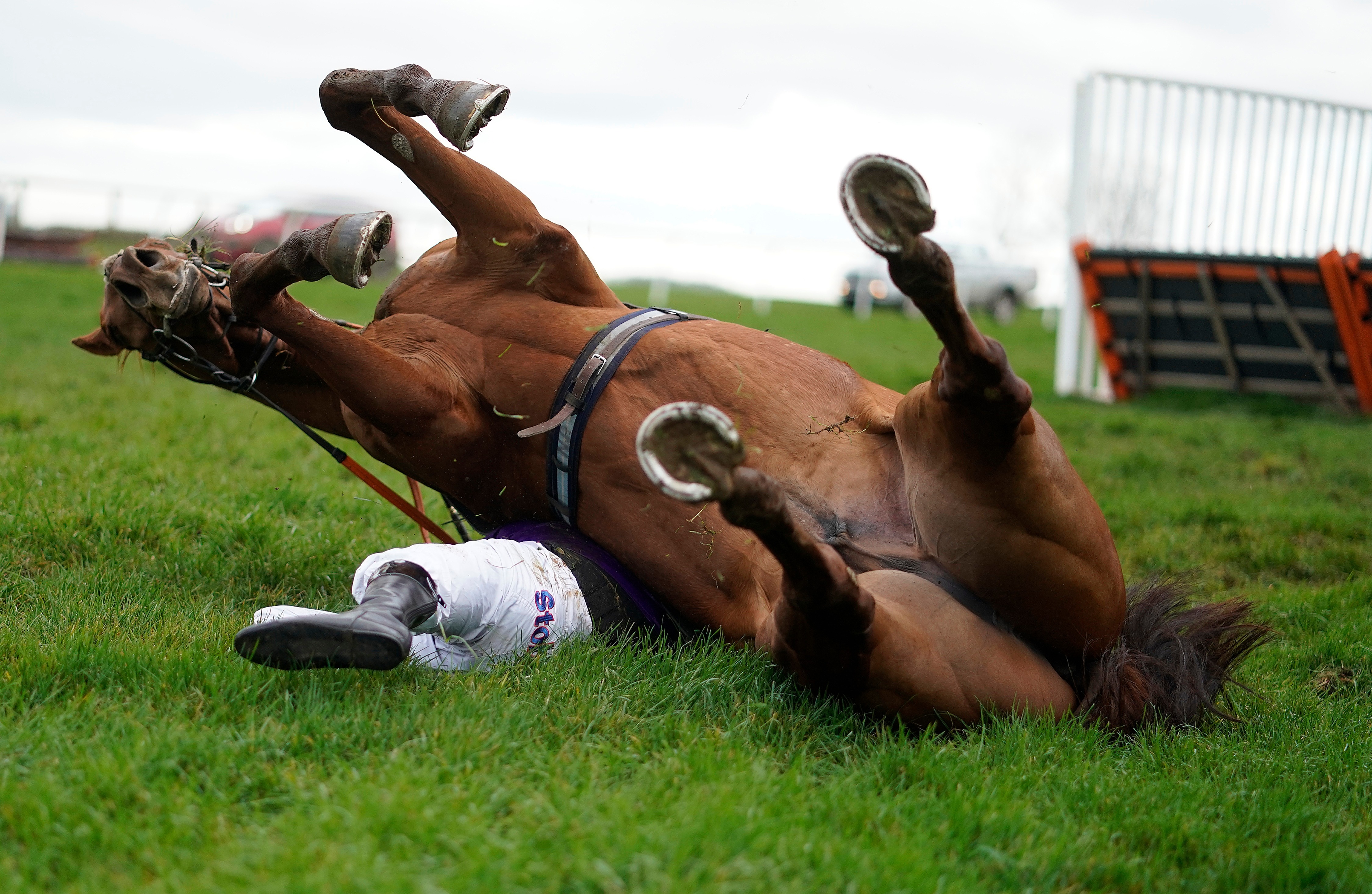 Or jumps towering fences where any split-second hesitation can lead to horse and rider coming down.

Paddy Power: £20 Risk Free Bet: New customers only. Place your FIRST bet on any sportsbook market and if it loses we will refund your stake in CASH. Max refund for this offer is £20. Only deposits made using Cards or Apple Pay will qualify for this promotion. T&Cs apply. Paddy's Rewards Club: Get a £10 free bet when you place 5x bets of £10+. T&Cs apply. 18+ Begambleaware.org

But sometimes, no matter how hard you are, you cannot account for mother luck.

Here, we look at some of the jockeys who have suffered the most misfortune from their falls on the track.

Run over by ambulance

Chris Meehan was kicked in the face by a horse, knocked out and left needing 27 stitches to his jaw.

He dislocated his ankle and was found choking on his own blood as medics arrived. 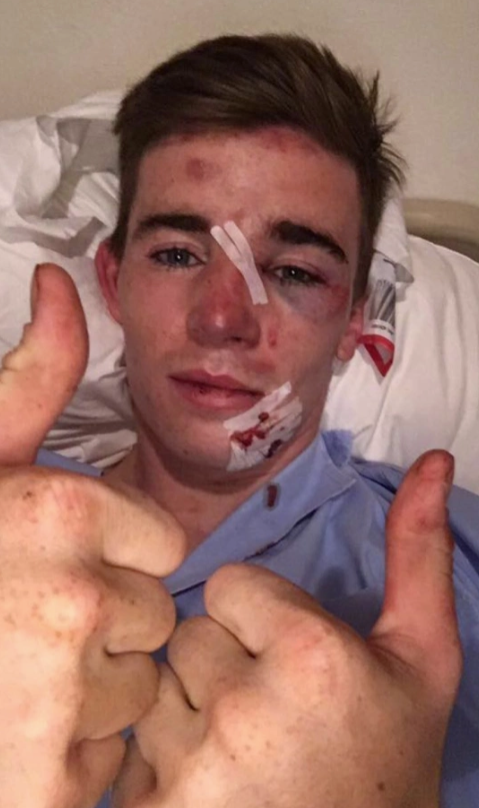 Incredibly, worse was to come.

The Northern Irish jockey can lay claim to falling victim to the unluckiest run of mishaps in racing history.

It all happened during a ride in Merano, Italy, in July 2016.

Meehan fell off his mount at a jump and was kicked in the face by the same horse, breaking his nose.

Another clattered into his head and left a huge gash in his jaw.

KO'd on the grass, medics rushed to his aide.

But the clueless ambulance driver ran over his leg, breaking it in the process.

As if it couldn't get any more unbelievable, Meehan's dad was an ambulance driver back at home.

Meehan said: "They stopped the ambulance while on top of my leg. I let a roar out of me.

"It left me with a broken leg. The men there pushed the ambulance off me.

"My father in Northern Ireland has been in the ambulance service for 30 years and he wasn't too happy at the sound of what went on.

"Because it's such a small tight track, they had to turn around and as they went to turn the ambulance, it reversed on top of my leg.

"After I left a roar out of me, everybody realised that the ambulance was on top of me and they all jumped up and pushed it off me."

In November of that same year, Meehan broke the same leg in a trampoline accident.

It is easy to see why Hollie Doyle is all smiles these days. 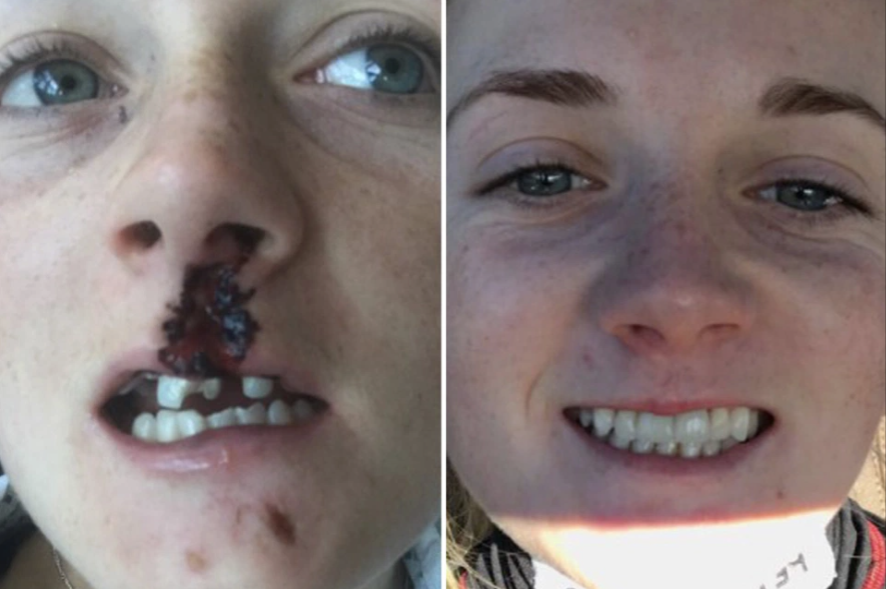 After a record-breaking 2020 – in which she finished third in the BBC Sports Personality of the Year award – she bagged her first treble of 2021 at Kempton last weekend.

But back in a race at Haydock in 2018, Doyle, 24, suffered a fall that would be enough to put most people off ever riding again.

She was aboard a horse called Snoop when it stumbled and unseated her.

At least three horses went over the top of her.

She was kicked under her jaw and had two teeth knocked out, which she accidentally swallowed.

Six more were smashed by the impact.

Amazingly she was back riding ten days later, but 12 months of trips to the dentist were required to fix her smile.

We're all familiar with the cry of 'timber!' when a tree falls in the woods.

But what do you shout when a horse lands on top of you? 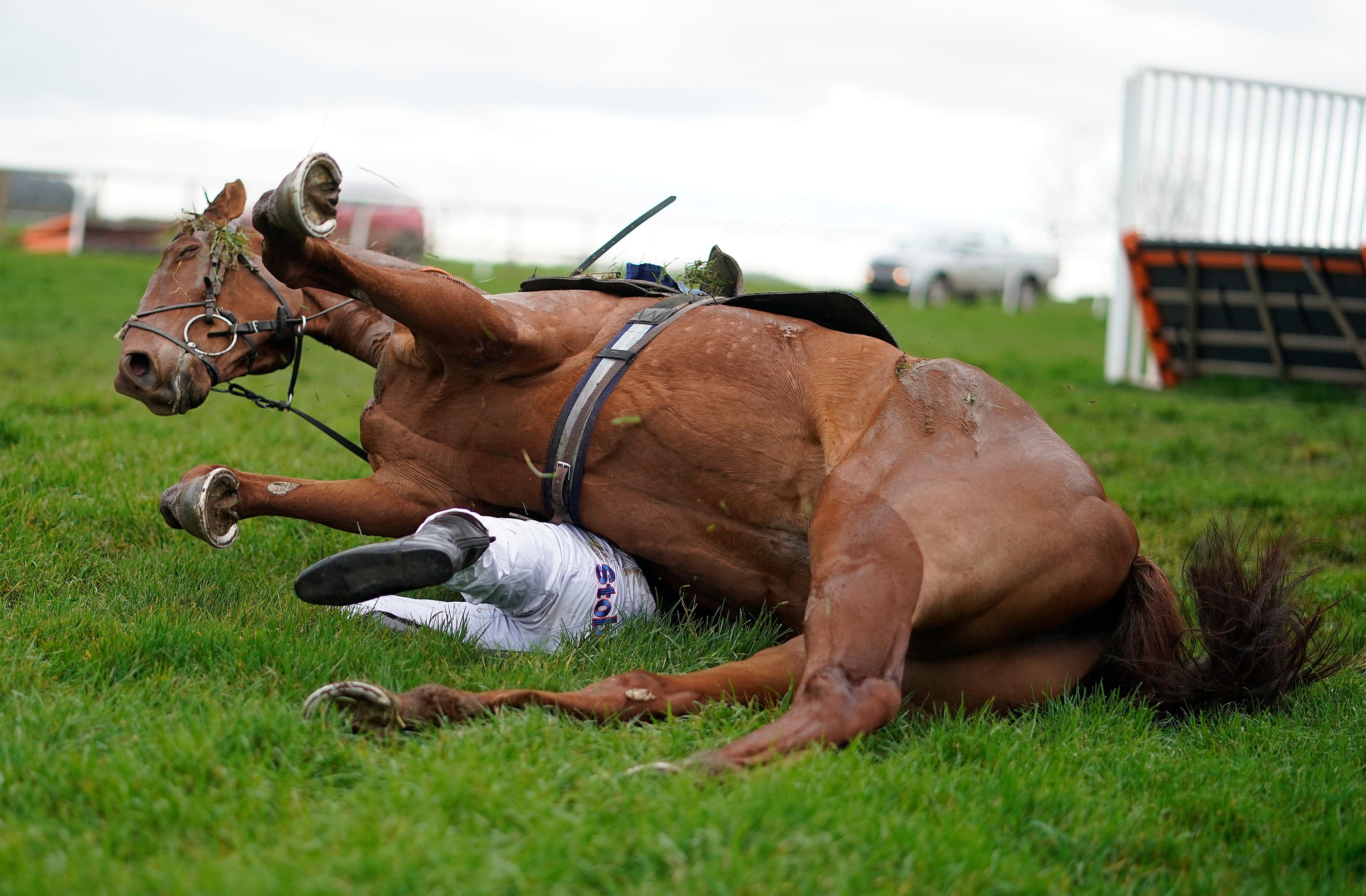 For Harry Kimber it could have been 'Kimber!'

The jockey was flattened after 80-1 shot West Chinnock came down on him following a final-flight fall at Wincanton in March 2019.

Fortunately, the horse got up OK and Kimber suffered only minor bruises after the jaw-dropping mishap.

These incredible photos show the moment an unlucky jockey broke his jaw after a collision with a rival horse's hoof.

Diamond Dark took a horror tumble in a cross-country race in Craon, France in August 2019. 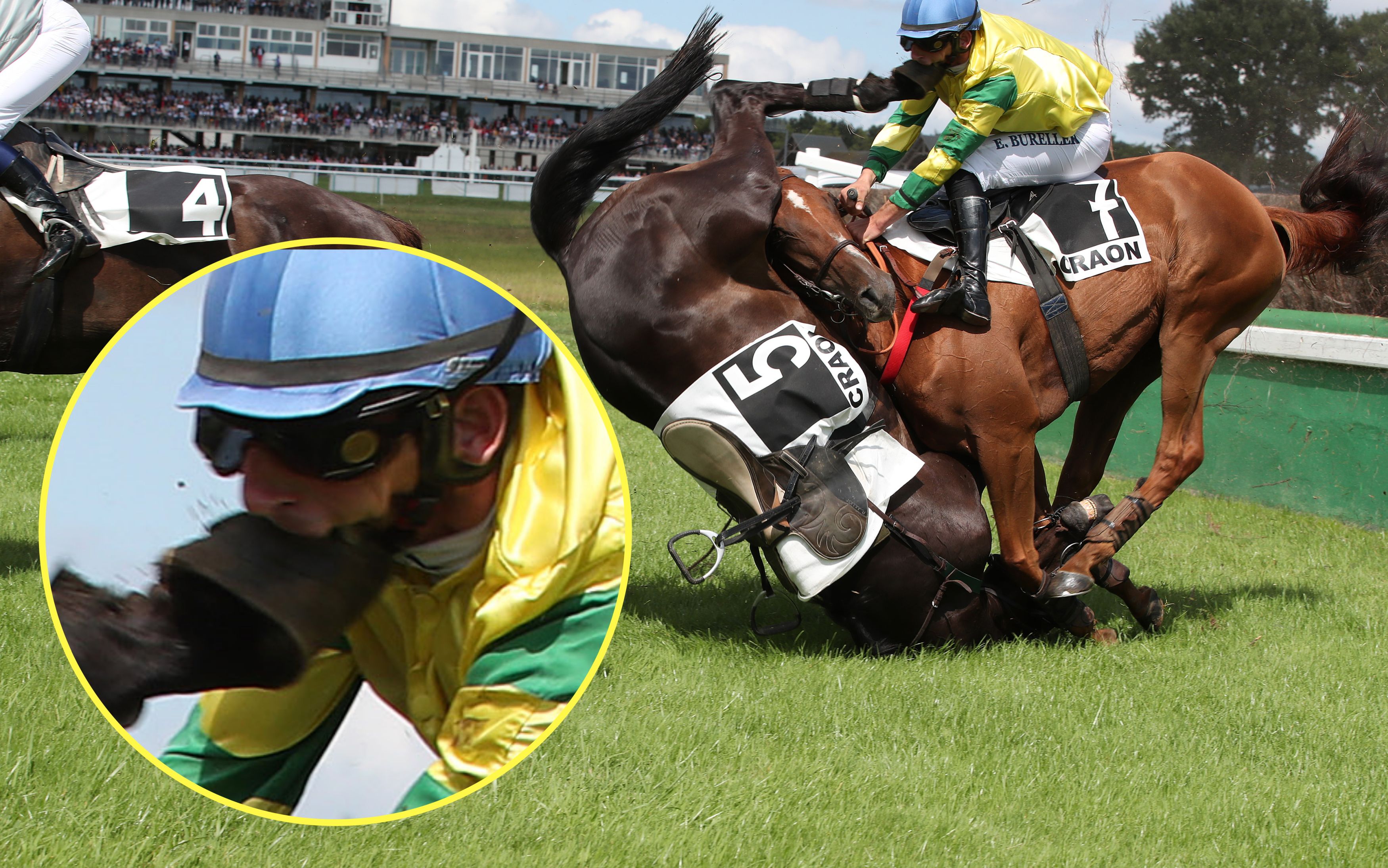 Following up close behind was Erwan Bureller on Sulfite.

With nowhere to go, Bureller copped a hoof in the mouth.

One image actually showed the jockey's upper lip curled over the top of the hoof as it smashed into his lower jaw.

Fortunately, both horses were OK and the other jockey who fell was uninjured.

Bureller came off worst of all, fracturing his jaw. 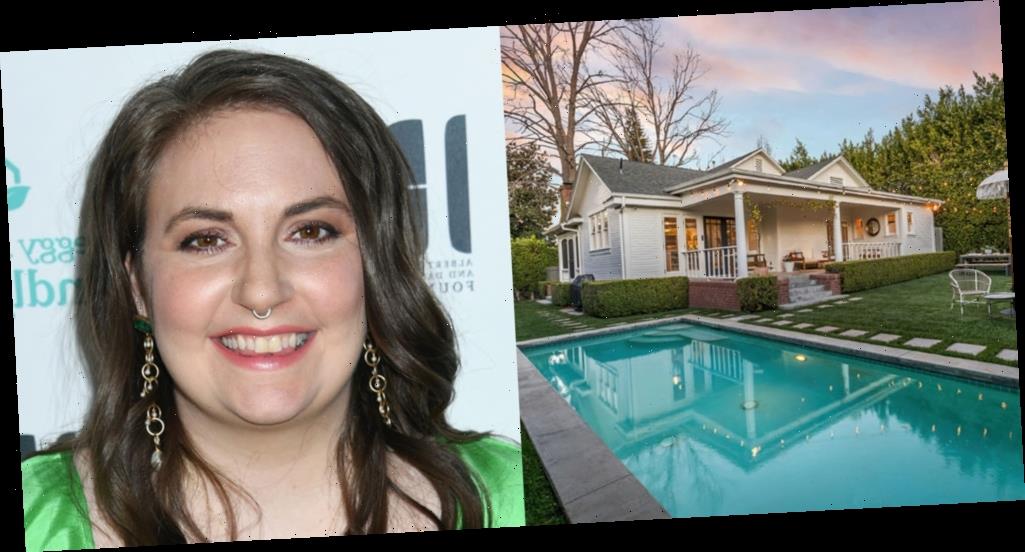 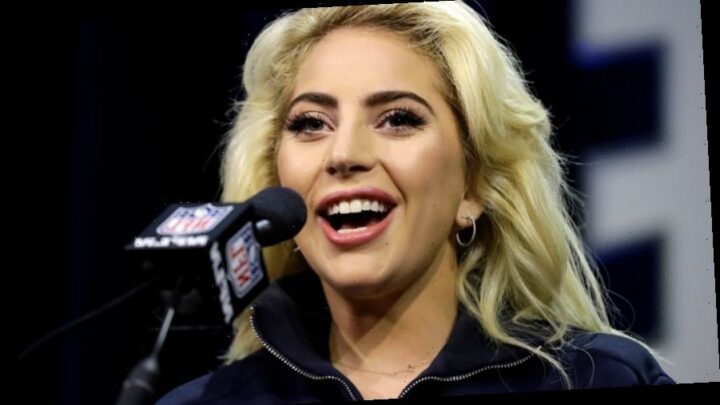