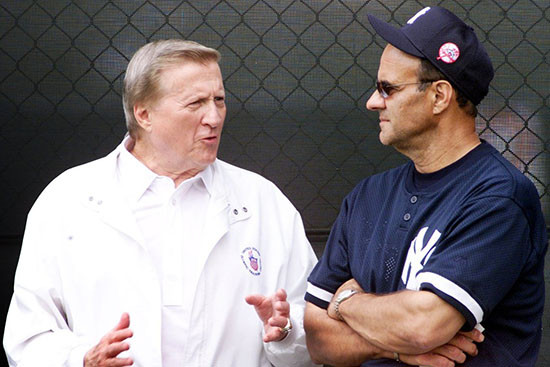 Put George Steinbrenner in the Hall of Fame where he belongs

Paint the pinstripes on the picturesque upstate village of Cooperstown, with Mariano Rivera headed to the Baseball Hall of Fame this coming summer and Derek Jeter in 2020.

It’s a Yankees championship party. This party, though, is not complete without The Boss.

Legendary Yankees owner George Steinbrenner is up for election as part of the Today’s Game Era Ballot, which will be voted upon Sunday at the winter meetings in Las Vegas with the announcement made that night on MLB Network.

It would be a baseball travesty again not to make Steinbrenner a Hall of Famer.

If he doesn’t make it this time The Boss will not be back on the ballot until 2021. He has missed in two other attempts.

In recent years the Hall of Fame has been dominated by Braves. Now it’s the Yankees’ turn to shine. Steinbrenner changed so many aspects of the game and brought championships back to The Bronx.

Life with George was never boring. Steinbrenner, who died July 13, 2010, should be in the Hall of Fame already. He should have joined another legendary Yankees owner in the hallowed halls, Jacob Ruppert, who transformed the Yankees into a storied franchise — acquiring Babe Ruth, and collecting 10 pennants and seven World Series crowns.

Steinbrenner has Ruppert beat by one pennant and accomplished all this in the difficult era of free agency.

Steinbrenner purchased the Yankees, a comatose franchise, in 1973 and oversaw the team’s golden path to seven World Series titles and 11 American League pennants in his 37 years as team owner. He revolutionized the game, opening his wallet to bring in free agents like Hall of Famer Reggie Jackson.

Steinbrenner welcomed Mr. October to New York in November 1976, and Jackson strongly believes Steinbrenner should join him in the Hall of Fame.

“For George, I absolutely think he should be in the Hall of Fame,’’ Jackson told The Post. “It’s crazy that he is not in.

“What he did for the game, for the brand of the Yankees, what he’s done for the game monetarily, what he’s done creating championships, creating star value,’’ Jackson said. “I think it’s incredible, and if you want to talk about what he has done for different communities that he touched from Tampa to New York, especially the service people he has constantly honored, it is so special.

“He’s got seven world championships and 11 pennants, and I think a lot of people don’t give him as much credit because they think he did it with a wallet and spent his money, but as everybody has seen over the past 20 years and even over the first 18 years, you can’t just buy a world championship.

“Just because you spend $100 million on a guy or give a guy a one-year for $20 million, or the worst thing that has happened is a 10-year deal, they just don’t work at all, so I think that’s the only thing that holds him back,’’ Jackson said.

A lightning rod of controversy, Steinbrenner made the Yankees into an evil-empire force, upped the pay scale for players and made it cool again to be a Yankees fan, creating an amazing brand in the process. Steinbrenner had his warts, too, and was suspended twice.

The 16-member appointed electorate board charged with this review of Steinbrenner and the others include Hall members Roberto Alomar, Bert Blyleven, Pat Gillick, Tony La Russa, Greg Maddux, Joe Morgan, John Schuerholz, Ozzie Smith and Steinbrenner’s former manager Joe Torre, who could prove to be a huge advocate for Steinbrenner, and also Lee Smith, a closer he managed.

When Torre was selected in December 2013, he said he believed Steinbrenner was a Hall of Famer. Though he forgot to mention The Boss in his acceptance speech the following summer, Torre said he felt terrible about that. He now has the chance to speak up for his old Boss.

To earn induction, candidates must receive 75 percent of ballots cast.

Yankees president Randy Levine did not mince words either about Steinbrenner’s Hall worthiness.

“It’s a no-brainer,’’ Levine told The Post. “When you look at the course of history, he’d be the greatest owner in the history of Major League Baseball.

“He won seven championships, you start there, but you also look at how he changed the economics of baseball,’’ Levine said. “With MSG and then the YES Network, he basically revolutionized local television rights. He revolutionized the branding of a professional team, turning a franchise into a sports and entertainment company, sustaining and advancing the Yankees as the most famous sports brand in the world. He was the leader in free agency and he was a good partner.

“Though they disagreed on many topics, he and Bud Selig were very great friends,’’ Levine said. “He agreed to revenue sharing, as painful as it was. He belongs in the Hall because of the accomplishments and the length of his success. I’d put all his accomplishments against any other executive or owner in the Hall of Fame.’’

And as Reggie told me, in true tell-it-like-it-is Mr. October fashion: “I mean, Bud Selig is in. How’s George not get in?’’

In past votes, according to sources, Steinbrenner ran into trouble with some executives on the committees. Perhaps they were jealous of his success.

George Steinbrenner deserves his plaque in Cooperstown. Put The Boss where he belongs.