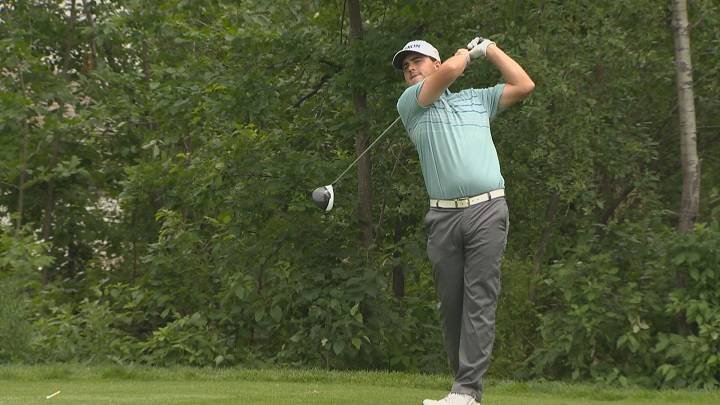 A Manitoban will be playing on the European professional golf tour next season, after Stony Mountain’s Aaron Cockerill recently earned conditional status.

It’s been a busy few months for Cockerill as he played in several qualifying events overseas, but now he’s back home, enjoying some much-needed down time.

“I’m excited to just be at home for a few weeks,” Cockerill said.

Three weeks: that’s how long Cockerill puts away his clubs for the off-season. He just got back from Australia where he finished 19th in his first European Tour event, the Australian PGA Championship. That was after he recently gained partial status through a grueling three-stage Q-school.

Cockerill has full status on Europe’s second-tier tour, which is called the Challenge Tour. But with conditional status on the main tour it will allow him to play in a minimum eight events there, and maybe more depending on his results.

He doesn’t consider it an easier road to the PGA Tour, but the chance to globe-trot made it all a hole-in-one.

“I was looking at the schedule for next year,” he said. “We’re going to see 20-plus countries, so it’s going to be cool.”

The 26-year-old has been a full-time member of Canada’s pro tour the last three years, and even though his travel expenses will now skyrocket, he’ll be playing for much bigger paydays.

“In Canada it’s a little easier. I can drive to half the events,” Cockerill said.

Cockerill will be one of only two Canadians on the Euro tour, and he’s already gotten some of the do’s and don’ts from fellow tour player Austin Connelly after they roomed together in Australia.

“The next tournament they were going to after Australia was South Africa, and they said, you do not rent a car there, or take public transit for the most part as it’s a little sketchy there, I guess.”

After the new year, Cockerill will head to Arizona for a few weeks of practice, and then he’s back to the land down under for the Victoria Open at the start of February.

Sangha sizzles on debut as Melbourne Stars get Thunderstruck