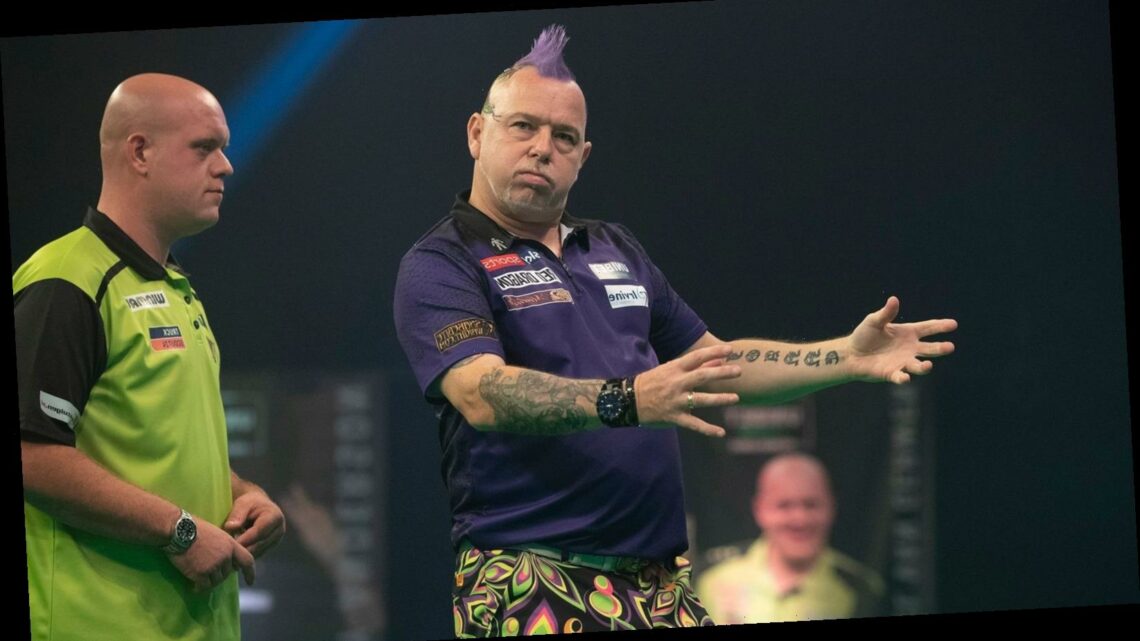 Michael van Gerwen faces a battle to qualify for the Premier League play-offs after suffering an 8-1 drubbing at the hands of a rampant Peter Wright on Wednesday night.

Van Gerwen endured a mixed return at the Marshall Arena last week, although he appeared to find his range with victory over Michael Smith before the brief hiatus.

However, in a repeat of this year’s World Championship final, ‘The Green Machine’ misfired and failed to win three legs in a match for the first time in his distinguished Premier League career.

The pre-match conversation was dominated by talk surrounding Van Gerwen potentially relinquishing his top spot record, with the Dutchman having finished at the Premier League summit in his previous seven appearances. 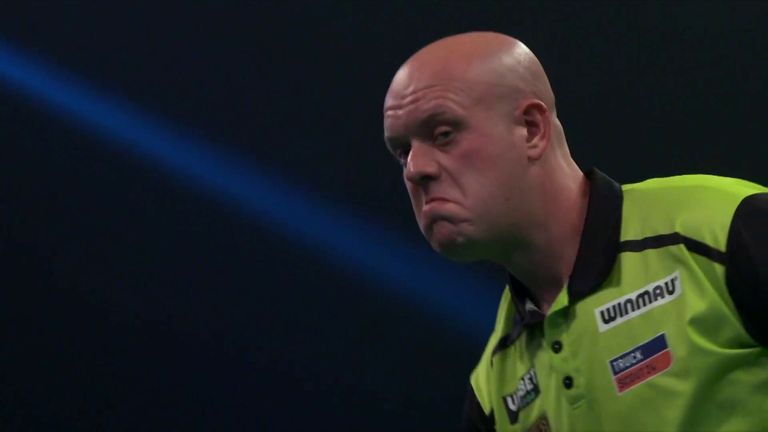 Nevertheless, the 31-year-old now faces a genuine battle to cement a top four spot, as he slipped to fifth ahead of Thursday’s clash against Glen Durrant – who defeated MVG 7-3 in their most recent clash last week.

Durrant remains three points clear at the top after producing an improbable comeback from 7-2 down to salvage a share of the spoils against Michael Smith, who was left to rue four missed match darts earlier in the piece.

‘Duzza’ leads Gary Anderson by three points with three to play, after ‘The Flying Scotsman’ overcame finishing-line fever to defeat Daryl Gurney 8-6, having averaged over 100 whilst firing in seven maximums.

Elsewhere, Nathan Aspinall returned to winning ways to climb above Gerwyn Price in the table, after ‘The Iceman’ had claimed the scalps of Van Gerwen and Wright in his last two fixtures.

Peter Wright leapfrogged Michael van Gerwen in the table after inflicting the Dutchman’s heaviest defeat in Premier League history on a remarkable night in Milton Keynes. 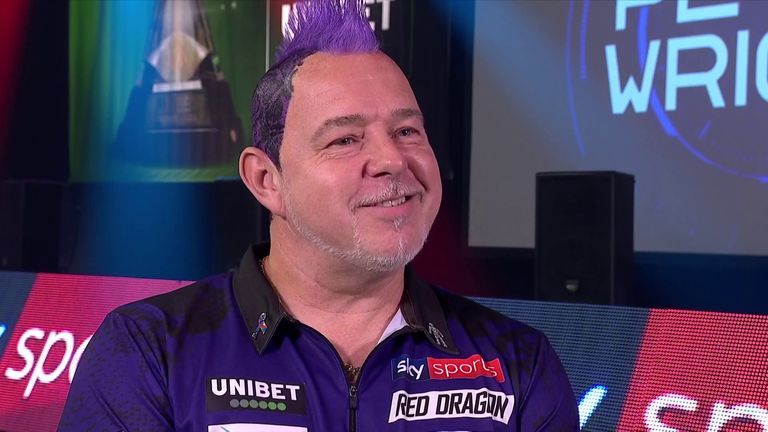 Despite landing a nine-darter on Night 11 and posting a multitude of ton-plus averages since the restart, Wright came into his clash against the world No 1 on the back of three consecutive defeats, but he made amends in sensational style.

Van Gerwen was in bullish mood after toppling Michael Smith in his previous outing but that optimism soon faded, as Snakebite completed a demolition job to put the beleaguered ‘Green Machine’ outside of the top-four spots. 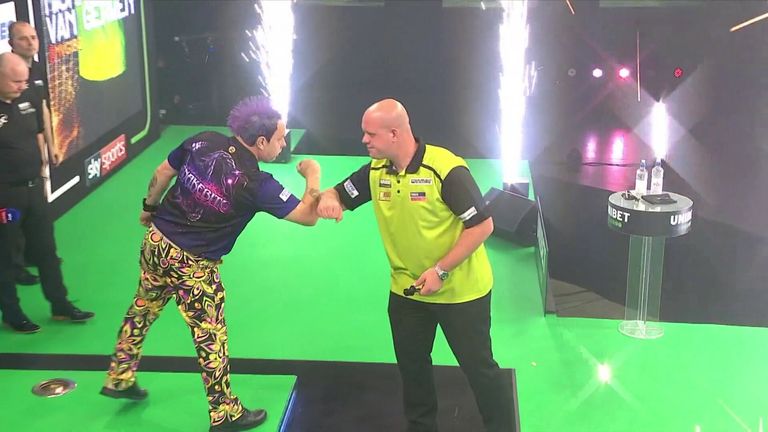 Wright opened up proceedings with a confident 13-dart hold and that set the tone. MVG spurned two darts to level in leg two and this proved an expensive error, as Snakebite ran riot and established a commanding 5-0 cushion.

The defending Premier League champion avoided the indignity of a whitewash in leg six after Wright wired the bull for a 126 kill, but this provided scant consolation.

Van Gerwen squandered three darts at double 18 moments later to reduce the arrears, and Wright converted clinical 74, 76 and 100 checkouts to wrap up an emphatic 8-1 success.

Glen Durrant showed all the battling qualities that have taken him to the top of the Premier League to fight back from 7-2 down to win five legs on the bounce and earn a point against Michael Smith. 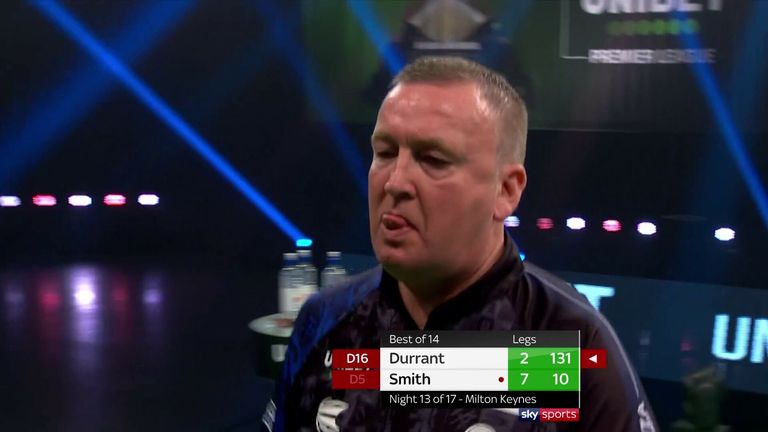 Duzza had forged a four-point lead on the back of an astonishing run on his debut season in the competition, and he showed why he is a contender to become just the third man to win the league phase.

Smith, beaten 7-3 on opening night by Duzza, had rallied to claim an early 3-1 lead with Durrant surprisingly missing his chances on the outer ring and punished at almost every turn by Bully Boy.

Five darts went begging for Duzza to close to within two and Smith returned to punish him with double to increase his advantage and then pinned the very same target to guarantee a point. 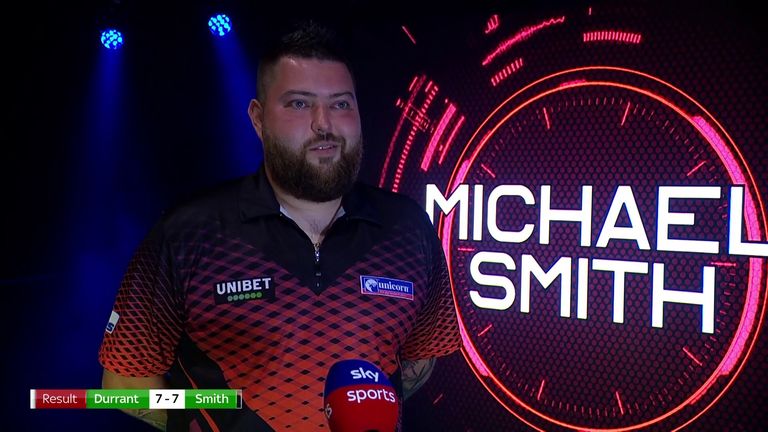 However, Durrant mounted his comeback, and just a few days on from overhauling a 7-3 deficit against Gary Anderson, he went one better to win a point that moved him to within a point of guaranteeing his place at the O2 in October.

Durrant’s 131 finish, after Smith had missed a dart for a 130 and an 8-2 win, got him going and four more followed for a share of the spoils.

Gary Anderson took a huge step towards securing his place in the top four with a 8-6 victory over Daryl Gurney, who fought back brilliantly from 7-3 down. 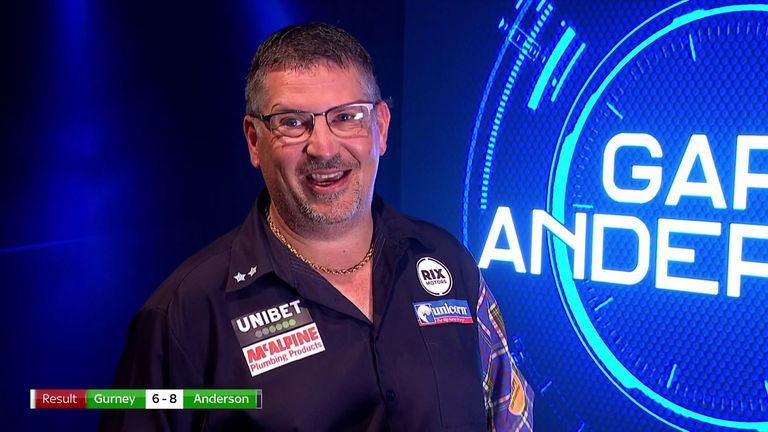 Three nights ago, Anderson wasted seven match darts against Durrant who fought back for a point and Gurney fell just short as the Flying Scotsman pinned the winning double at the eleventh time of asking.

One of the game’s worst practisers, by his own admission, Anderson has welcomed the back-to-back nights of competitive action but he knows he has work to do on his finishing if he is to add a third Premier League crown to his glittering CV. 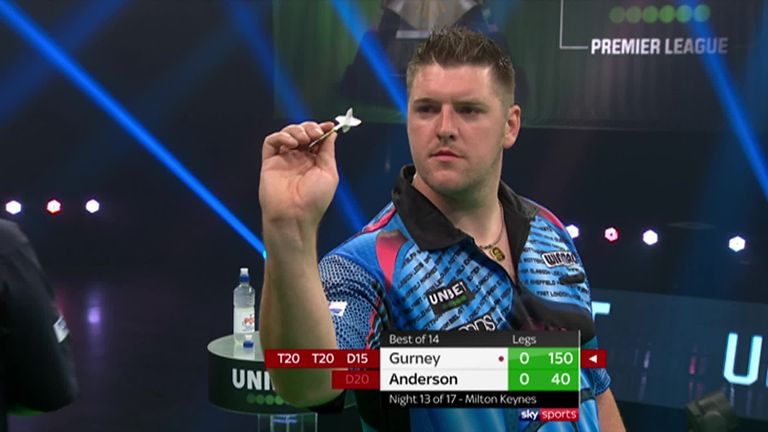 Gurney started fast, taking out 150 to deny Anderson an early break and then following up with an equally classy 116 for a 2-0 advantage. Anderson claimed seven of the next eight legs to secure a point, an astonishing consistency of scoring left Gurney playing catch-up in every leg.

But the man from Derry chipped away, and when Anderson missed six darts to take out 40, Gurney was able to close to within two and then when an eight-match dart went begging for Anderson, Gurney was within one, before the Scot finally took his chances.

Nathan Aspinall moved up to third as he targets a play-off spot on his Premier League debut, courtesy of completing a league double over fellow top-four challenger Gerwyn Price. 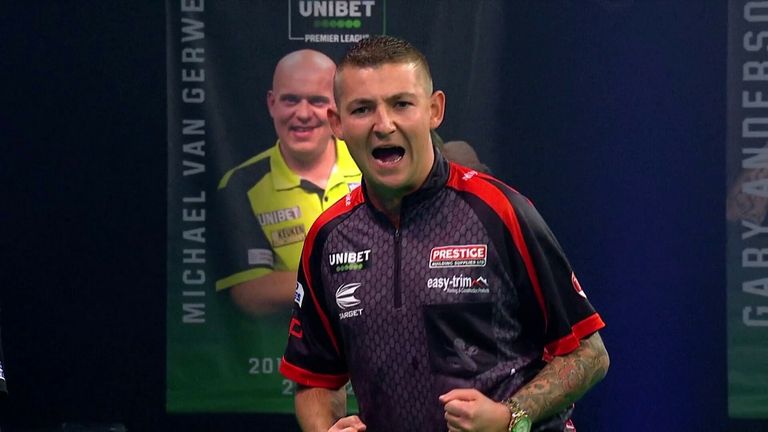 Having drawn first blood on throw, Price bust a 73 finish to double his lead and Aspinall duly capitalised, restoring parity at one apiece before following up consecutive 13-dart legs with a sublime 125 finish to lead 4-1.

‘The Iceman’ responded with a 121 checkout of his own to reduce the arrears, only to see Aspinall regain his three-leg buffer with yet another break of throw in leg seven. 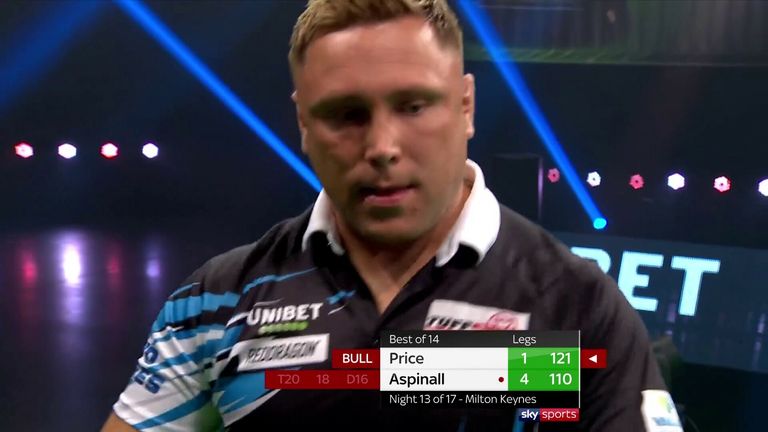 The pendulum appeared to have swung in the Welshman’s favour after Aspinall squandered nine darts at double across the next three legs which gifted Price the opportunity to level at 5-5, but the former UK Open champion responded.