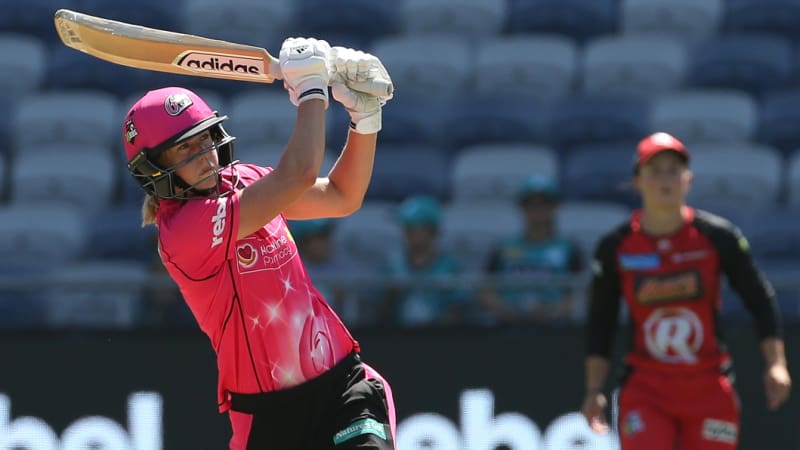 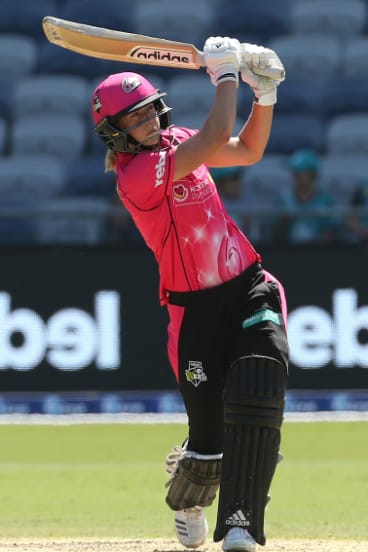 Stand and deliver: Ellyse Perry hits out for the Sixers against the Renegades in Geelong.Credit:AAP

Ellyse Perry has continued her incredible WBBL season to help Sydney Sixers secure the minor premiership with a 29-run victory over Melbourne Renegades.

Perry became the first Big Bash player – male or female – to reach 2000 runs as she plundered 67 not out at Geelong’s GMHBA Stadium.

Sydney posted 2-136 from their 20 overs yesterday before restricting the Renegades to 8-107, with Perry also snaring 1-10. The sides will meet in a semi-final rematch at Sydney’s Drummoyne Oval next Saturday, with the winner to face either Sydney Thunder or Brisbane Heat in the January 26 decider.

Perry was slow to get off the mark but went on to smash three sixes, carrying her bat for the fifth time this season. ‘‘She’s had an exceptional season,’’ said Sixers batter Erin Burns, who was named player of the match for her 53 not out. ‘‘She’s obviously someone who’s hitting the ball exceptionally well and then [batting together], her temperament out there is something where you can really get that energy and run with that.’’

The Sixers will wrap up the WBBL season on Monday with a dead-rubber clash against Melbourne Stars at the MCG.

Meanwhile, Australian captain Meg Lanning maintained her rare form as Perth Scorchers ended their campaign on a high note, smashing the Adelaide Strikers by 10 wickets. Lanning and England’s Amy Jones both thumped 70 not out to make short work of the Strikers’ score of 6-140 on Sunday.

They sailed past the target with 20 balls to spare to help Perth split the weekend’s double-header at Albrecht Oval in Alice Springs 1-1.

Lanning was the aggressor early in compiling her fifth 70-plus score from her past seven knocks while player-of-the-match Jones scored her first half-century in 12 innings.

‘‘It was great to bat with her [Lanning],’’ said Jones. ‘‘I’ve been on the receiving end of some of her runs against us [at international level] so it was brilliant to watch it from the other end.’’

The Strikers are also out of the finals, sitting sixth with one day remaining in the regular season.
Megan Schutt was tidy (0-21 off four overs) but most Adelaide bowlers were smacked around. 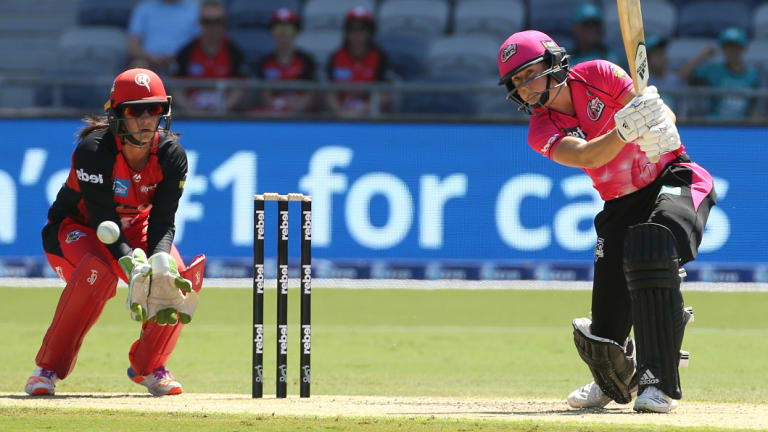 Prolific: Perry on the front foot in another innings of substance.Credit:AAP

The Strikers were held to 47 off their first 10 overs before thumping 93 off the next 10, thanks largely to Amanda-Jade Wellington, who crunched a career-best undefeated 30 off 12 balls.
Sophie Devine (seven) can hold her head high after finishing the tournament with 556 runs (the third-best in WBBL history).

Captain Suzie Bates top-scored with 39 but the middle order was well contained.

‘The Young And The Restless’ Spoilers: Cane And Victoria Explained
World News