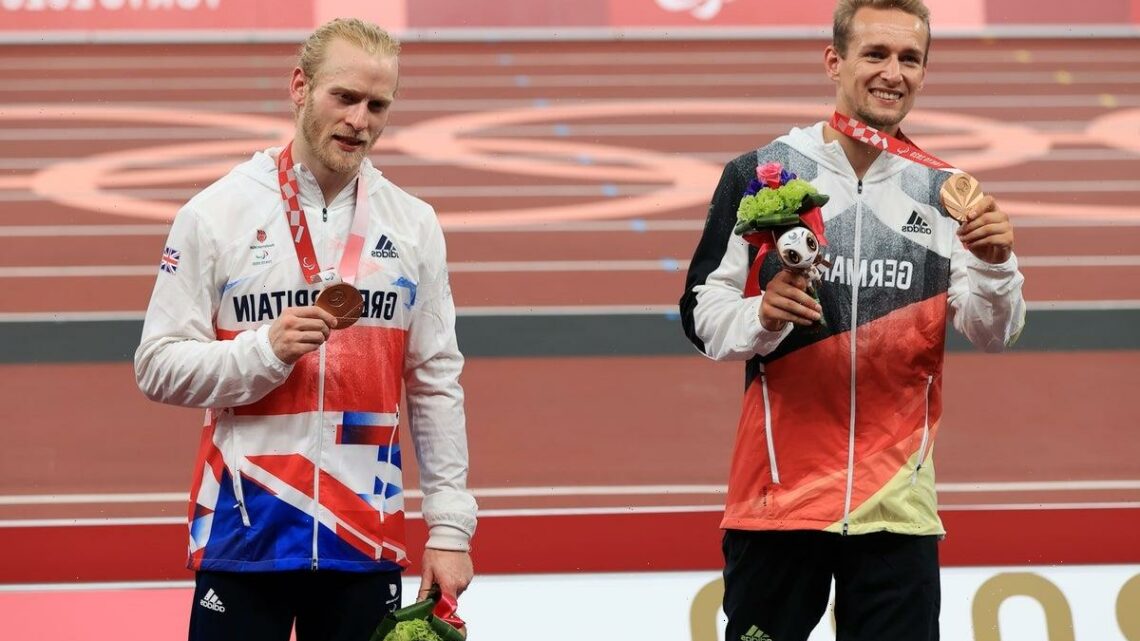 Ever the showman Jonnie Peacock promised the race of the century – and he wasn’t wrong.

Peacock has used every opportunity before these Paralympic Games to vow the blade runners would steal the show in Tokyo, which seemed rather appropriate considering that film’s atmospheric look was inspired by Shinjuku’s Golden Gai district, just a couple of javelin lugs from the stadium.

The two-time Paralympic champion is a sprinter who likes to make bold predictions and with an additional two world and European titles – an unbeaten major championship run lasting a decade – he is normally good for his word.

He vowed it would be exciting but probably didn’t think it would be this exciting, as he lost his winning record in the closest Paralympic race in history.

He was forced to endure an agonising wait, pacing the track like an expectant father for three minutes and 16 seconds, before learning he’d be sharing bronze with Germany’s Johannes Floors.

Felix Streng, the dominant force in the T64 classification this season, took gold but just three hundredths of a second separated the top four athletes across the line, Costa Rica’s Sherman Guity Guity with a surprise silver.

Peacock didn’t know whether to laugh or cry, though it certainly delivered on his promise that the race would be the highlight of the athletics programme here, whatever unfolds in the days ahead. Peacock, as quick with a quote as he is on the track, is never knowingly undersold.

“I didn’t think you could share medals in sprints, has this ever happened?” he said. “I think there’s two ways I take it and being positive, 15 year old Jonnie would have been so happy and I’m pleased I was competitive after all the problems.

“If that’s not an advert for Paralympic sport in 11 seconds I don’t know what is. I expect it to keep going that way too, I think the world record is going to be broken very, very soon.”

Paralympic history can be notoriously sketchy but a medal has only twice been shared in an Olympic track competitions. In 1896, when timing systems were slightly less advanced, Francis Lane and Alajos Szokolyi shared 100m bronze, more recently Jamaica’s Sherone Simpson and Kerron Stewart split women’s 200m silver at the Beijing Games.

Peacock’s preparations for Tokyo have not run a smooth course, he took time away from the sport after winning his second world title in London but injuries and the small matter of a global pandemic have not helped his best laid plans for Tokyo.

Streng has certainly benefitted from a coaching switch to the UK, working with Peacock’s former coach Steve Fudge in Loughborough, who knows just how to get an athlete to peak when it matters.

Their rivalry looks set to run to Paris, as Peacock – who’ll be 31 in three years – jokily promised revenge at next year’s World Championships, back here in Japan, the new champion retorted: “I’m not scared of you man’ – and he wasn’t smiling.

“Felix’s emergence is all about coaching, it’s always that,” added Peacock. “We looked at blade technology in 2015 and we found it was 0.02 seconds difference over 60 metres. I moved coaches to Dan Pfaff and I took three tenths off my personal best in a few months.

“Felix has moved from an old school German coach to an elite system in the UK and it’s paid off for him, so fair play.”

Still dripping in sweat, Peacock spent several minutes watching the race display, already studying where he thinks improvements can be made.

At 60 metres he was leading the field but claims he let his shoulders slump, a decisive error in the final strides.

“I was winning that race – at halfway I was getting that gold medal,” he added. “All I can do is take full responsibility, it was me, it was my mistake. That’s what sport should be about though. You make a mistake in the Paralympic final you should be made to pay for it, as a sports fan I’m sort of proud of that.”

Peacock has a stock joke that the only famous disabled person he knew growing up was Long John Silver – and more than anyone Britain’s most famous Paralympian is fighting to shift the stigmas that still prevail around disability.

He remains the most marketable man on the team, aided by his appearance as the first ever amputee on Strictly four years ago.

“The Paralympics has the ability to change things, 15% of the world is made up of disabled people and we need to be represented and stuff like that race helps. I’m so proud to be a part of it,” he added

Sainsbury’s is a proud supporter of ParalympicsGB and a champion of inclusive sport for all. Sainsbury’s commitment to helping customers to eat better has been at the heart of what we do since 1869. For more information on Sainsbury’s visit www.sainsburys.co.uk/ and https://paralympics.org.uk/