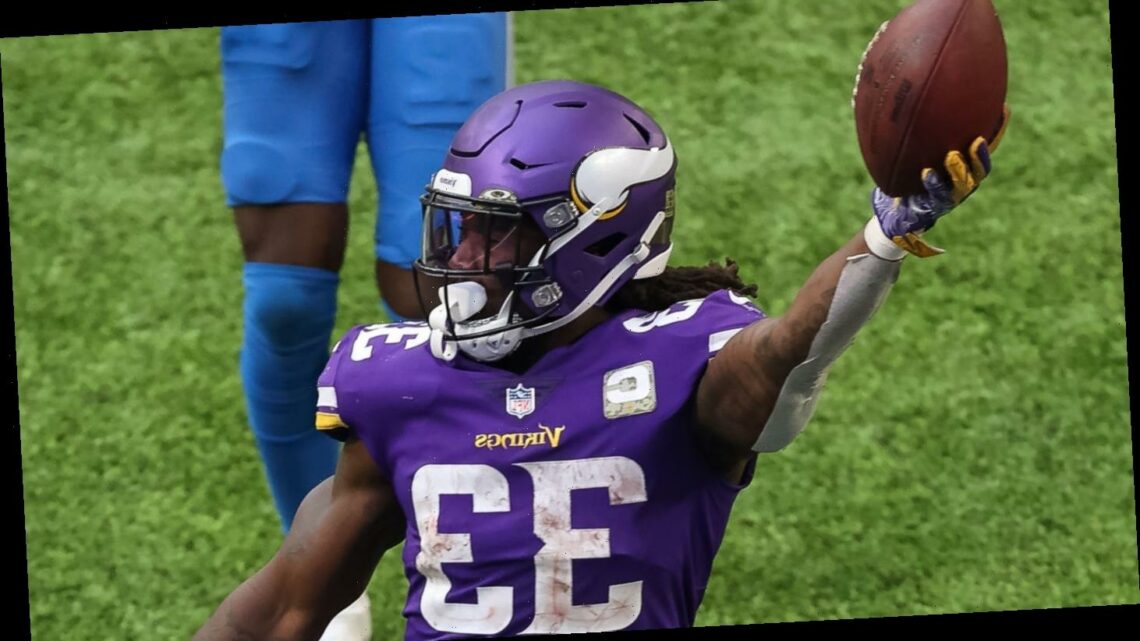 A quick rundown on items of interest as Week 10 rolls on in the NFL:

Who’s hot: Dalvin Cook. The Vikings star has topped 200 yards from scrimmage in back-to-back games to remind us that a dominant running back can still wreak plenty of havoc in a quarterback-driven game. Cook steamrolled over the Lions and Packers for 369 rushing yards the past two weekends, topping the 366-yard markers that Adrian Peterson produced (2007, 2012) as most in team history over back-to-back games. And he complemented his power and long-distance strikes on the ground with 109 receiving yards over the past two games, which is why he’s just the third player in league history (Jim Brown, 1963; Deuce McAllister, 2003) with at least 225 yards from scrimmage and 2 TDs in consecutive games, according to the NFL. Despite missing a game-and-a-half in October with a groin injury, Cook leads the league with 858 rushing yards (averaging a whopping 6 yards per carry) and tops the touchdown chart with 13 (12 rushing). He’s the formula the Vikings (3-5) needed to claw back from an 0-3 start. Can he stay hot? If so, he could become the rare running back to garner consideration for the typically quarterback-dominated MVP honors. But first things first. In facing the third NFC North defense in as many weeks on Monday night, Cook will get his stiffest test yet from a Bears unit that has had his number. In three career games against Chicago, Cook has totaled 86 yards – less than 29 yards per game – and averaged a paltry 2.5 yards per carry. Then again, lately Cook has been rewriting history.

Pressure’s on: Anthony Lynn.The good news: Playing with a rookie quarterback in Justin Herbert, the Chargers find themselves week after week positioned to win in crunch time. The bad: The 2-6 record is marred by close losses, including the past two setbacks determined on the final play of the game. Los Angeles has lost by 5, 1, 3, 7, 5 and 3, with the three-point losses coming in overtime. They are that close – and that far – from being in the middle of the playoff mix. Lynn, in his fourth season, has built a solid foundation. But without the close wins (or blowout wins) to show for it, his team could be on the verge of being labeled as underachievers.

Key matchup: DK Metcalf vs. Jalen Ramsey. The Rams often elect to assign Ramsey, one of the NFL’s best corners, to the opponent’s best receiver. In this case, that means trying to contain the emergence of Metcalf, who has fast become the NFL’s best deep threat while hauling in dimes from Russell Wilson in the NFL’s top-ranked passing game. Metcalf has an NFL-high 8 receiving TDs while averaging 18.3 yards per catch. Ramsey, though, can be just as physical and brings extra juice with ample trash-talking and gamesmanship to back up his shutdown ability in the No. 2 pass defense. The stakes are obvious. Los Angeles (5-3) can claim at least a share of first place, while Seattle (6-2) is desperate to rediscover some distance in the NFC West standings.

Rookie watch: Patrick Queen. Chalk up another first-round hit for the Ravens. The LSU product, drafted 28th overall, has shown all of the signs (like leading the team with 52 tackles) of becoming another in Baltimore’s tradition of star linebackers. He’s undoubtedly filled a need with his range, speed and coverage ability for a unit that has allowed a league-low 17.75 points a game. It will be interesting to see how he fares on Sunday night if Cam Newton gets moving in the running game. It’s a bit unfair to Queen to point out that Ray Lewis was once a rookie linebacker drafted near the bottom of the first round (26th), but there are some serious standards in Baltimore.

Next man up: Mike Davis. Is this déjà vu? Sort of. With Christian McCaffrey scratched with a shoulder injury, Davis will get the starting nod again for the Panthers. It’s a tough task on Sunday, with the Bucs bringing the NFL’s top-ranked run defense and probably in a foul mood after being shredded by the Saints. Even so, the power-running Davis filled in admirably when McCaffrey missed six games earlier this season and helped fuel a three-game winning streak.

Stomach for an upset: Texans at Browns.It’s a return to Cleveland for Romeo Crennel, who coached the Browns from 2005-2008 but more recently became the oldest coach in NFL history (73) to post a victory. No doubt, the conditions won’t be in Crennel’s favor to win on Sunday with a 3 ½-point underdog that has won just two games. Rain is in the forecast. Lake effect winds are a constant. And Browns quarterback Baker Mayfield, off the COVID-19 reserve list, gets Nick Chubb back. Yet with Deshaun Watson and J.J. Watt in tow, Houston has a puncher’s chance against a team that can’t always be trusted.

If the playoffs were today … The Seahawks would be the No. 1 seed in the NFC.But check back next week.  And the week after. And so on. Like Seattle, Green Bay and New Orleans are also 6-2, yet the defensively deficient Seahawks have the edge due to a higher winning percentage in conference games (.800, 4-1), which of course is subject to change as the “best” team in the NFC seems to change by the week. In any event, the top seed is worth so much more than it has been in recent years as just one team in each conference will receive a first-round bye. It just seems that the big playoff prize of a bye could come down to tiebreakers.

Did you notice? The Dolphins defense returned fumbles for touchdowns in each of the past two games, victories in rookie Tua Tagovailoa’s first two NFL starts. If Miami can turn another fumble into a TD runback against the Chargers, it would become just the third team in NFL history to achieve that feat, after San Francisco in 1999 and Baltimore in 2019.

Stat’s the fact: Younghoe Koo is the NFL’s second-leading scorer with 81 points. That may seem odd when considering the Falcons (3-6) are dwelling at the bottom of the NFC South. Yet it also reflects how the Falcons have squandered opportunities. Atlanta is tied with Denver for the league lead with 12 field goals after driving inside the 20, which coincides with a 52.9% TD rate in the red zone that is fifth-worst in the NFL. Koo has been reliable on his treys, converting an NFL-high 21 field goals on 22 attempts. But he’s also missed on three of 21 PAT kicks.