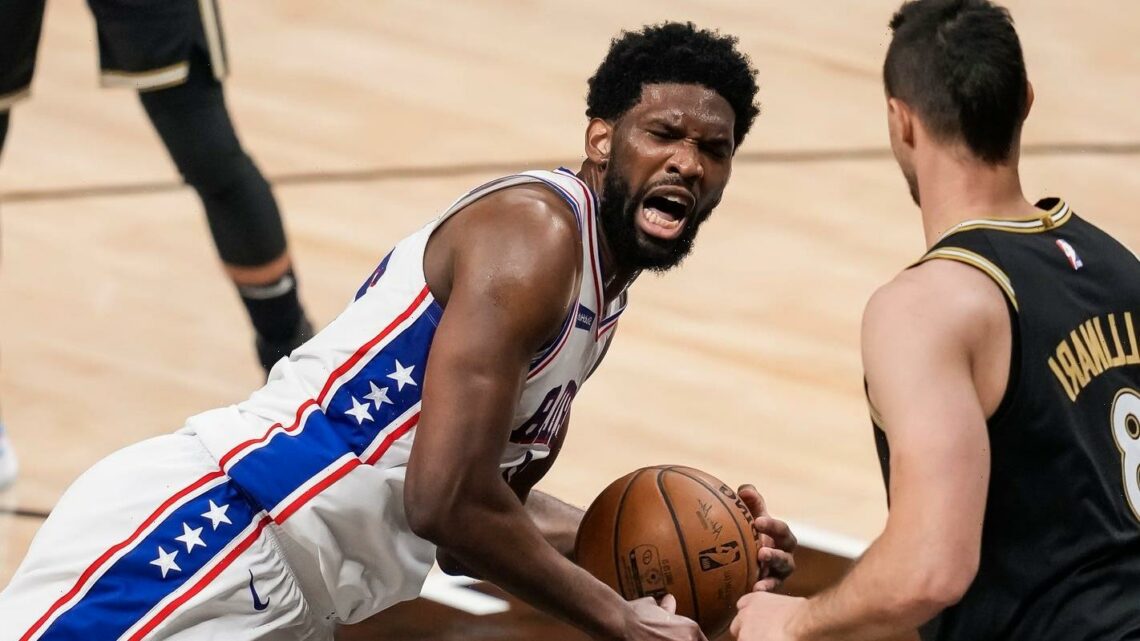 ATLANTA — Trae Young had just made his most ridiculous 3-pointer of the postseason, a leaning, fading to his right bomb from the sideline with Tyrese Maxey hounding his every dribble, the kind of shot that only superstar players make much less attempt in clutch minutes of a closeout game.

But Young had done it, pulling the Atlanta Hawks back within a point of the Philadelphia 76ers with just 1:59 on the clock. It felt like the moment that might just launch these improbable Hawks to a Game 6 win and the biggest upset of the playoffs, a staggering punch before the knockout blow in front of a standing-room only crowd that had spent two hours willing their team to clinch the series.

And then, just like that, it went dark at State Farm Arena. Literally.

As omens go, it was hard to know what exactly it meant. Were the Hawks about to turn the lights off on the 76ers for good? Or, was the switch about to flip on for a No. 1 seed that hadn’t played like it in this series?

Now, after Philadelphia stayed alive with a 103-99 win, we know for sure: A missed opportunity for Atlanta. A reprieve for 76ers, and a chance to walk from the darkness of their epic Game 5 collapse into the light of the Eastern Conference finals.

"We dropped the ball, obviously, and that stung for us as a whole group," 76ers forward Tobias Harris said. "We said, 'There’s going to be a lot of criticism, but we have to stay focused because the series isn't over.' It may have felt like that for a lot of people, but for us as a group, we have another game to win."

Now they have another, and perhaps a lot more than that.

The assumption now will be that Atlanta is effectively done, having let the chance to wrap up the series slip through its grasp. The reality, as with most things involving the Ben Simmons-Joel Embiid 76ers, may not be quite that simple.

This is still a team with massive structural flaws, starting with Simmons — their supposed cornerstone piece — having such a limited impact on offense that he was on the bench from around the six-minute mark until two minutes left because the Hawks were committed to putting him on the foul line where he has shot 33% this postseason.

The 76ers are also a team that so often seems vulnerable to the emotional strain of the playoffs, to the pressure of fulfilling the promise that their "Process" would eventually pay off with something more significant than a second-round playoff exit.

In that sense, what they’ll face Sunday is far more mental than physical. The implications of losing a Game 7 at home to the Hawks would be as monumental as anything their franchise has seen in multiple decades.

"We know what the narrative is out there and it’s a lot easier to play with no pressure, I’ll say that," Hawks guard Kevin Huerter said. "It feels like we’ve played with house money the whole postseason, and this is a lot of guys’ first postseason so we’re still in a good spot. Our confidence is really high. Tonight was a really good opportunity, and we could have won, but Game 7 is anybody’s."

It says something both extremely good and extremely troubling that the 76ers would not have made it through Game 6 without rookie Tyrese Maxey’s aggressiveness and confidence, or without Seth Curry once again looking like his better-known brother from the 3-point line.

This is supposed to be about Simmons and Embiid, who seems to be tiring out more and more as the series goes on while playing on a torn meniscus in his knee. Neither Simmons (six points) nor Embiid (22 points on 9-of-24 shooting) played well enough to beat the Hawks, much less suggest that the 76ers could actually win an increasingly wide-open NBA title.

But Maxey got on the floor early due to Simmons’ foul trouble, made some audacious shots that helped the 76ers weather an early Hawks surge and ended up as their primary ballhandler down the stretch. After playing just 33 minutes combined for the entire series through five games, he ended up scoring 16 points in 29 minutes on Friday.

"He just had guts out there," Harris said. "He had confidence. The minute he stepped on the floor, he gave us that boost and he just played with that freeness out there. He wasn’t scared of the moment, wasn’t shy. He got to his spots and gave us that big boost of energy."