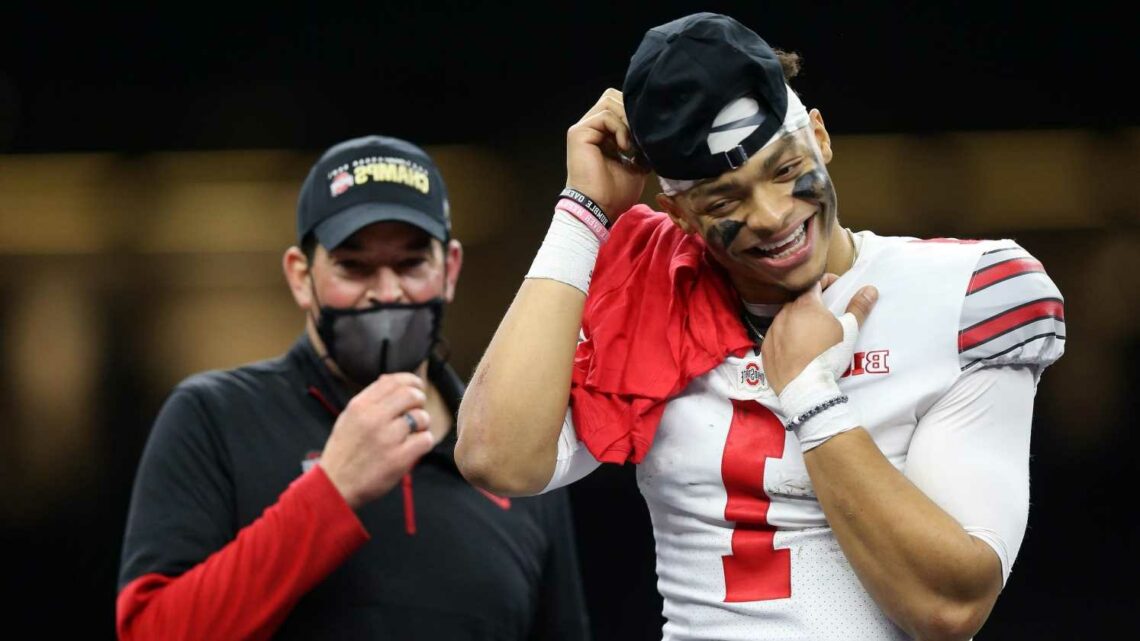 When a team has been searching for a franchise quarterback for as many decades as the Chicago Bears, taking one in the first round is bound to spark wild enthusiasm.

When that quarterback’s last name is Fields and he’ll be playing at Soldier Field, in the shadow of the Field Museum, well, you can imagine the level of delirium that is sweeping through Chicago right now.

Forgive me if I reserve judgment for a season or two.

Justin Fields might well be the steal of the draft, and maybe he’ll be the one to finally put the revolving door for quarterbacks out of service at Halas Hall. He certainly seems to have the physical tools and the mental makeup, losing all of two games in two seasons at Ohio State and outplaying eventual No. 1 pick Trevor Lawrence in last season's Sugar Bowl.

But the current Bears brain trust has shown no ability whatsoever to get anything right when it comes to the most important position on the team, and I’m not confident they won’t screw it up again with Fields.

“Getting him is one thing. For us to surround him and develop him is the other thing. You can draft players, but you have to develop them the right way,” general manager Ryan Pace said Thursday night, after the Bears traded up to take Fields with the 11th pick.

“That’s what I love about the environment that we have.”

Except this would be the same environment in which Mitchell Trubisky crashed and burned.

I recognize Matt Nagy was not the coach in 2017, when Pace traded up to make Trubisky the overall No. 2 pick – ahead of Patrick Mahomes and Deshaun Watson, as any Bears fan will tell you through gritted teeth and a stream of expletives. Nagy was the offensive coordinator in Kansas City then, and he helped Mahomes get acclimated to the NFL – no small achievement given Mahomes’ adjustment was so seamless he was the league’s MVP his first year as a starter.

But Nagy also had three years to fix Trubisky, and that went so well that the Bears cut ties with the quarterback – now the backup for the Buffalo Bills – after his rookie contract expired. Bringing in Nick Foles, who was supposed to thrive under Nagy because he had worked with him in Philadelphia and Kansas City, didn’t pan out, either.

So it is not a foregone conclusion that Nagy and his staff will be the QB whisperers needed to develop a franchise passer.

Pace also pointed to Chicago’s veteran quarterbacks, Andy Dalton and Nick Foles. They can mentor Fields, like Alex Smith did with Mahomes, and Pace said their presence means the Bears won’t have to rush their franchise quarterback onto the field. The Bears gave Dalton a one-year, $10 million deal last month to be their starter, and Pace said Thursday that that hasn’t changed.

“Andy is our starter, and we’re going to have a really good plan in place to develop Justin and do what’s best for our organization to win games,” Pace said.

That sounds good, but the Bears had a similar plan four years ago.

Chicago had signed Mike Glennon to a three-year, $45 million deal earlier that offseason and said he would be the starter so Trubisky would have time to develop. The season was all of a month old before Glennon was benched and Trubisky was starting.

Granted, Dalton is a better quarterback than Glennon. And he at least knew he would be a transitional quarterback when he signed with Bears, unlike Glennon, who was blindsided by Chicago’s pick of Trubisky.

“At the right speed. That’s what matters, developing this guy,” Pace said. “The process in how we do that is important. We’ve got a good plan in place to surround him with the right resources and develop him the right way.”

But the NFL is not in the hand-holding business, and Pace and Nagy were lucky to have survived after last season, when the Bears lost seven of their last 10 last year to finish 8-8 for a second consecutive season and then got embarrassed by the New Orleans Saints in the wild-card round.

If things go south early in the season, everyone knows that take-it-slow plan with Fields will go out the window.

Perhaps it won’t come to that. Perhaps, if it does, Fields will be good enough to overcome his circumstances.

Fields' talent, combined with his impressive resume, justifies the city's excitement over his selection. It's the people who made the pick that no longer deserve the benefit of the doubt, and it is now on Fields to prove their doubters wrong.