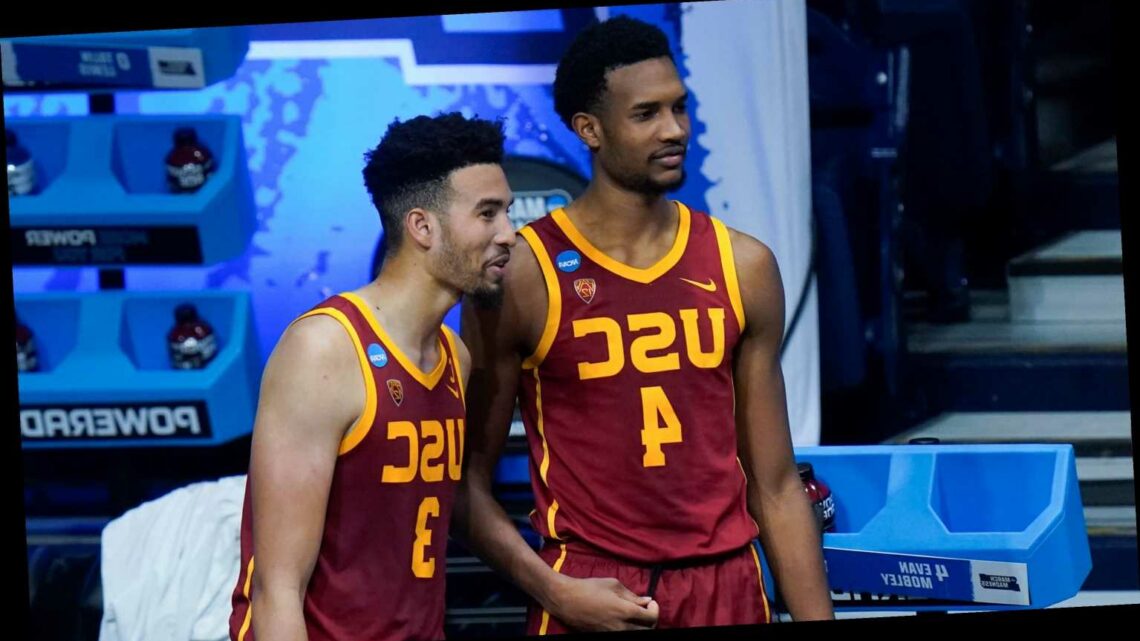 Opinion: Emergence of Isaiah Mobley is good news for USC, bad news for every other men’s NCAA Tournament team

INDIANAPOLIS — One Mobley brother is enough to handle. Get both of them going, and Southern California might just be unstoppable.

With Isaiah and Evan Mobley leading the way Monday night, the Trojans steamrolled Kansas, 85-51, handing the Jayhawks their worst loss ever in the NCAA men’s tournament. Considering the deep history Kansas has in this event, that’s saying something.

At halftime, the Mobleys had just as many points (21) as the entire Kansas team, and one more rebound (16). They finished with a combined 27 points, 21 rebounds and nine assists.

“When we are playing like this, I think it spreads to everyone, and we all just become dominant,” Isaiah Mobley said. “Of course it gets me and Evan going. But like you guys could see in this game, it got Isaiah White going, Max (Agbonkpolo), Tajh (Eaddy) got it going, Chevez (Goodwin). It spreads out like a cancer – a good cancer at that.

“When we're rolling and everyone else gets going with us, I think we're going to be a very hard team to beat throughout our run in March Madness.”

NCAA TOURNAMENT BRACKETS: Check to see how your March Madness picks are faring

OPINION: Upset-filled weekend may be product of unusual silence at men's NCAA Tournament

The teams remaining in the NCAA Tournament can consider themselves warned. Sixth-seeded USC plays Oregon, a Pac-12 rival and the No. 7 seed, in the Sweet 16 on Sunday night.

Evan, a freshman, is considered the better of the Mobley brothers. He came into the Kansas game averaging 16.8 points and 8.7 rebounds a game, both team highs, and ranked among the top five freshman in the country in nine different categories, including blocks (90), double-doubles (11) and field goal percentage (.579).

He made several watch lists for player of the year, and has a chance to pass Cade Cunningham as the No. 1 pick in the NBA draft with Oklahoma State out of the tournament.

But Isaiah, who is 21 months older than Evan, has blossomed in the NCAA Tournament. He had 15 in the first-round win over Drake, and another 17 against Kansas. That’s three shy of his career high, and he might have gotten that had coach Andy Enfield not pulled him with 3:42 to play.

It’s not just his production, though, it’s how he’s scoring. He was 4-of-5 from 3-point range against Kansas, with three of those bombs coming in the first 13:30 as the Trojans effectively buried Kansas.

At 6-foot-10, that kind of range is going to make Isaiah Mobley a handful for any team to defend.

“Evan gets all the focus of the opposing defenses. He's so hard to guard because he can go inside, outside, he can put the ball on the floor. But Isaiah is equally as skilled. He just doesn't have the length and explosiveness as his brother,” Enfield said. “Isaiah is figuring out ways, as you saw, to shoot the 3-point shot, to get angles, to be more efficient with his offensive game. I think you've really seen that the last few games with Isaiah.

“It's great to have Evan and Isaiah play at high levels.”

Great for USC, yes. For opponents, it’s their worst nightmare.

Scheming to stop Evan Mobley was already a challenge. Having to figure out how to stop Isaiah Mobley, too, might be too much to ask, especially on the short turnarounds in the NCAA Tournament.

And say an opponent does figure that out, there’s still the rest of the Trojans to contend with. In addition to their athletic gifts and coach's kid savvy, Enfield said the true beauty of the Mobleys is that they’re unselfish. If teams are keying on one, or both, of them, they’re happy to defer to their teammates.

“They have no ego,” Enfield said. “They don't need to score the ball. They don't get jealous of each other or other players. They just want to win.

“It's great to see their development as individuals,” Enfield added, “but also as a brother combo throughout the season.”

USC will go as far as the Mobley brothers can take them. And right now, that road looks endless.