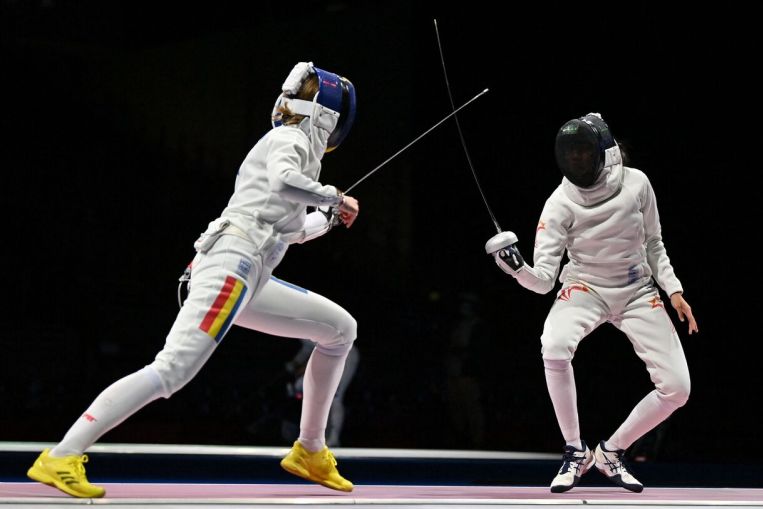 But when the countdown clock indicated just 35 seconds remained in their women’s individual table-of-32 bout at the Olympic Games, they were also separated by a single point.

Kiria, 21, had previously shown she paid scant regard for world rankings to get to Tokyo, upsetting a series of higher-ranked opponents at the Olympic qualification event in April.

On Saturday, she came close to claiming her biggest scalp yet as she pulled the score to 10-11.

But in a battle of nerves, 36-year-old Popescu, who has more Olympic medals (two) than Kiria has had Olympic bouts before their battle, held hers and went on to win 15-10.

Later, beads of sweat still trickling down her forehead, Kiria said: “At the end I was rushing a bit because I wanted to keep the momentum up (after scoring two consecutive points) and also because… I didn’t have a lot of time left.

“Her experience showed. She knew I was going to rush, so she took advantage of that.”

Wisdom was the key for Popescu, who won the silver medal in the individual epee at the Beijing Games in 2008 and a team gold medal in Rio eight years later, but Kiria accumulated some of her own as well here in Tokyo.

The second-year chemistry student at the National University of Singapore revealed she had a chance to cross blades with Popescu in a training session on Wednesday and “badly” lost the five-point spar which she described as an “eye-opening experience”.

Her coach, Henry Koh, said that based on Kiria’s showing on Saturday, her tactical knowledge and mental toughness “went up another half-level” even after the brief encounter in training with Popescu, whom he rates as one of the most well-rounded epee fencers.

“Think about it, do you really improve in strength or skill so much in the space of three days? No, it’s up here that’s different,” he said, pointing to his head.

Earlier in the morning, Kiria upset world No. 90 Coco Lin of Hong Kong 15-11 in a table of 64 bout where she also had to show resilience.

Not only was history against her – the Singaporean lost both times the pair met in competition over the last five years – she also trailed 2-0 early in their clash in Tokyo. But she remained composed, went in front before the end of the first of three rounds, and never relinquished her lead.

Kiria said she was proud she was able to maintain her cool while “freaking out on the inside” after being down, and “just having the bravery to execute my own actions and not to worry about the outcome of the match”.

Her Olympic experience has ended after two bouts but Kiria’s passion for her sport is galvanised by it.

“When the score was 11-10, I knew I stood a chance against one of the world’s best,” she said. “I wasn’t too fussed about losing the match… being able to share the (stage) with world champions was a really amazing experience.”

Meghan created her own family disaster by not telling them about Prince Harry sooner, source says
World News