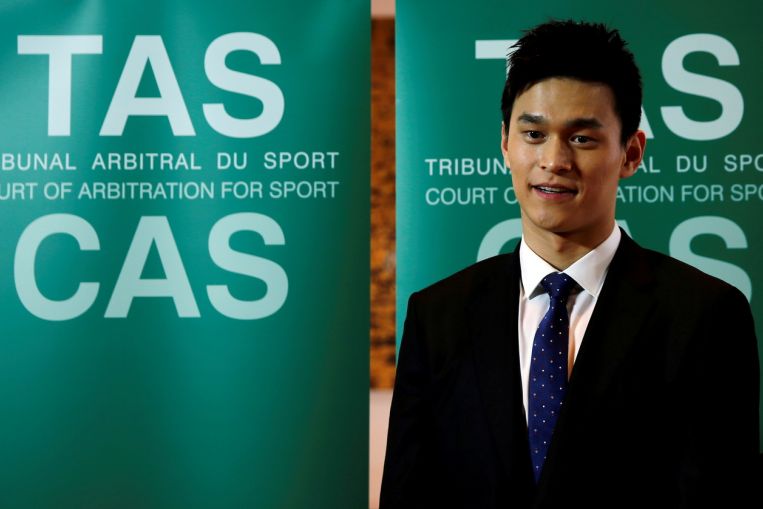 LAUSANNE (REUTERS) – Chinese swimmer Sun Yang has had his eight-year ban for doping violations reduced to four years, the Court of Arbitration for Sport (CAS) said in a statement on Tuesday (June 22).

The decision means Sun will miss the Tokyo Olympics later this year, but will be eligible for the Paris Games in 2024.

Sun was banned for eight years by CAS in February 2020 after it accepted an appeal from the World Anti-Doping Agency (Wada) against a decision by swimming governing body Fina to clear him of wrongdoing for his conduct during a 2018 test.

Sun appealed that decision and the Swiss court confirmed in December it had upheld a challenge against the CAS Panel “on the grounds of bias of one of the arbitrators of the CAS”.

Wada had said it would “present its case robustly again when the matter returns to the CAS Panel, which will be chaired by a different president”.

“The new panel considered that the circumstances surrounding the sample collection of Sept 4 and 5 in 2018 merited a period of ineligibility at the lower end of the range: namely the addition of the three-month period (from 2014) to the four-year ban applicable in this second case,” CAS said.

“Consequently, the panel concluded that a period of ineligibility of four years and three months commencing on Feb 28, 2020 is to be imposed on Sun Yang.”

Sun, the reigning world and Olympic champion in 200m freestyle, was banned after he and members of his entourage were found to have smashed vials containing blood samples taken at an out-of-competition test in September 2018.

He had questioned the credentials and identity of the testers and has constantly proclaimed his innocence.

The 29-year-old, who won two gold medals at the 2012 London Games and another at Rio de Janeiro in 2016, is a controversial figure in the sport.

He served a three-month doping suspension in 2014 for taking the stimulant trimetazidine, which he said he took to treat a heart condition, while Australian swimmer Mack Horton called him a drug cheat at the 2016 Rio Olympics.

Horton refused to share the podium with Sun at the 2019 world championships in South Korea, a move that was applauded by other swimmers but condemned by Fina.

These noise-canceling headphones offer 'better quality' and are cheaper than Bose — get them for 48% off, today only