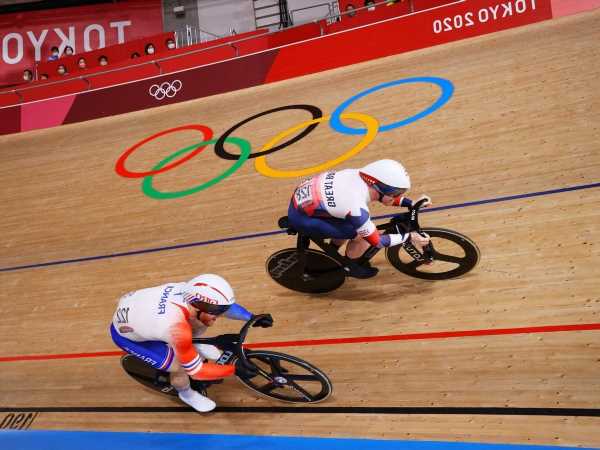 The Tokyo 2020 Olympic track cycling takes place at the Izu Velodrome a few hours south of the capital.

Track cycling has featured at every modern Olympic Games other than Stockhom 1912, with women’s events on the track added in 1988.

Great Britain took six golds at the velodrome at Rio 2016 and with a slightly expanded schedule this time around, team captains Jason and Laura Kenny and the rest of the Team GB squad picked will be looking to again feature heavily on the podium.

Some fans are allowed in the arena as Japan’s lockdown rules differ in and out of Tokyo.

What is the Omnium?

Great Britain’s Laura Kenny is the defending female champion of the Omnium. The competition has been streamlined since the last Olympics, and is now held over one day and four events – down from the two-day, six event competition in Rio de Janeiro.

The four separate bunch events are: the scratch race, the tempo race, the elimination race and the points race.

Riders accumulate points in the first three events based on a points scale, which are then carried in to the points race. During the course of this race riders may lose or gain points from their total, and the winner is the rider with the most points at the end of the fourth event, which is 25km for men and 20km for women.

The scratch race is a traditional first across the line race held over 10km for men and 7.5km for women, while the tempo race covers the same distance, but awards a point to the first rider crossing the line on each lap (20 points can also be earned by lapping the field).

The elimination race is a bunch race in which the last rider to cross the line every two laps is eliminated.

Italy’s Elia Viviani took gold in the men’s Omnium at Rio 2016, while Kenny will be looking to take a third successive Omnium Olympic title since the event’s introduction into the women’s track cycling program.

What is the Keirin?

An event of great tradition and particular significance in Japan, the Keirin has a peculiar look.

In Tokyo, six riders will begin the race behind a motorized device to progressively reach a specific speed of 50 kilometres per hour, before exiting the track with three laps to go – slightly longer than at the last Olympics, when the final sprint covered two and a half laps.

The cyclists will sprint in a succession of knockout rounds held over two days at the Izu Velodrome. Riders knocked out in the first round of heats do get a second opportunity via a repechage system.

What is the Madison?

Returning to the Olympics after not being held at either London 2012 or Rio 2016, Madison is a team event for two riders. It is a relay race held over 50km for men and 30km for women, with a succession of intermediate sprints every 10 laps.

The two team members alternate between racing and resting, with the rider not racing remaining on the track before being thrown back into the action via a hand sling from their team mate.

Points are awarded at each intermediate sprint, while any team that gains a lap on the main bunch earns an extra 20 points; any team lapped has 20 points deducted.

The final sprint after the full distance is covered is worth double points – starting from a maximum of 10.

A female competition will be held in the Madison for the first time at Tokyo 2020, with Laura Kenny adding the event to her schedule as she bids to become Great Britain’s most successful female Olympian.

Marchant OUT of the women's keirin after collison with Van Riessen