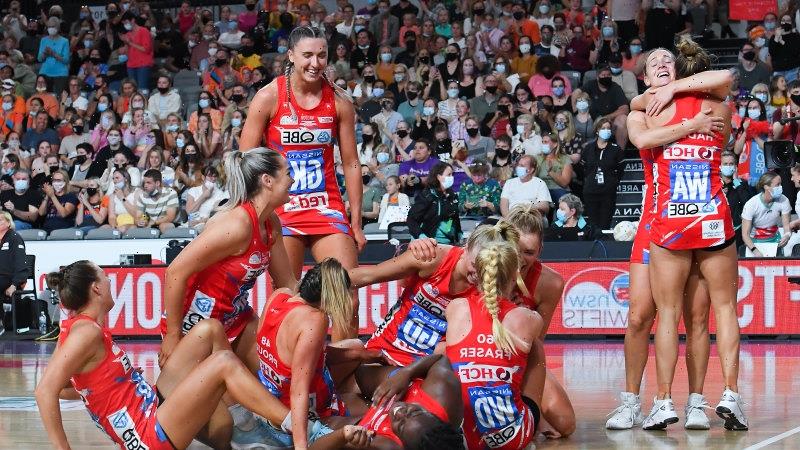 It was a massive year for netball, with a new broadcast deal, a push for inclusion in the Olympics and a national captain without a club contract.

But with NSW teams forced to travel between four states in just a month due to COVID-19, it was far from smooth sailing in 2021. Let’s break it down. 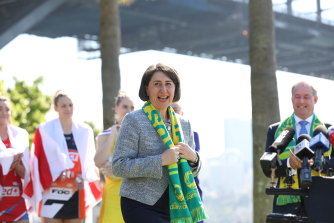 Sydney will host the Netball World Cup in 2027.Credit:Dom Lorrimer

WORD OF THE YEAR: Olympics

Undoubtedly, the most exciting news of the year for netball fans was the push for the sport to be included in the Olympics.

After Brisbane secured the 2032 Olympics, Netball Australia sought backing from World Netball to launch an official bid for inclusion in the Games.

It will be quite the process, given netball is largely a Commonwealth sport.

But the IOC has said it will make a decision in about five years, so there is a lot of time to put together a thorough proposal.

Diamonds shooter Sophie Dwyer. Sophie Dwyer, 19, had a 2021 she could have never imagined. Giants shooter Kiera Austin went down just 20 minutes into the first round of the season with an ACL injury – elevating Dwyer as the club’s starting goal attack. Dwyer revelled in the extra responsibility and was selected in the Diamonds squad for the Quad Series against England, New Zealand and South Africa in January as a result.

National captain Liz Watson. It wasn’t a great start for Watson when a foot injury ruled her out for the entire 2021 season shortly after starring in her role as captain against New Zealand in the Constellation Cup in March. But her heartbreaking year turned into one to remember come September, when she was officially announced as the 25th Diamonds captain. She will lead the national side at the 2022 Commonwealth Games, the 2023 Netball World Cup and beyond.

Swifts coach Briony Akle. Like Watson, Akle had a disappointing start to the year as COVID-19 once again wreaked havoc with the Super Netball season. Consequently, the Swifts and the Giants had to relocate four times to four states in just a month. For Akle, it also meant splitting her family apart after she was identified as a close contact of a positive case in Melbourne. But in the end, the stress was all worth it – the Swifts won the premiership for the second time in just three seasons and Akle claimed the Joyce Brown Coach of the Year award. 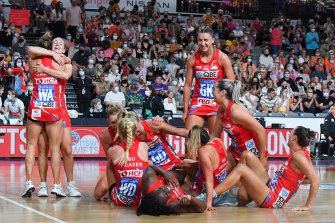 The Swifts celebrate their 2021 victory after months of disruption. Credit:Getty

Former Diamonds captain Caitlin Bassett. Bassett was undoubtedly the biggest loser of 2021. After struggling with the introduction of the Super Shot last year, Bassett moved to New Zealand’s ANZ Premiership as a star signing of the Waikato Bay of Plenty Magic for 2021. The club finished last on the ladder. The move only proved the 33-year-old’s best years are behind her. Bassett was replaced as Diamonds captain and failed to land a club contract for the 2022 Super Netball season.

Vixens recruit Kiera Austin. Austin’s 2021 was supposed to be the peak of her career after a stunning performance as Australia’s first-choice shooter in the Constellation Cup. Instead, 2021 was a rehab-filled trough for Austin. Despite an ACL tear putting her out for the season, the 24-year-old recovered quickly and signed a new contract with the Vixens for 2022. 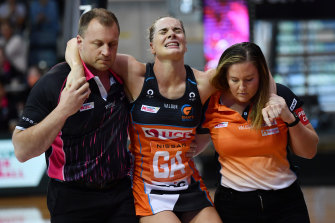 Kiera Austin is helped off the court after her injury in round one. Credit:Getty

National coach Stacey Marinkovich. Her first year in the job certainly had its moments. Marinkovich came under fire at the start of the year after opting against appointing a permanent captain. Diamonds great Liz Ellis described rotating the captaincy as “wrong”. Criticism of Marinkovich only continued once the Diamonds lost the series against New Zealand.

In May, Raiders NRL coach Ricky Stuart fired up players, coaches, fans and legends across the sport after implying netball wasn’t tough. On Fox Sports’ NRL 360, host Paul Kent repeated comments Stuart had made to him after they had discussed reports of his relationships with some players as being on the rocks. “As Ricky said to me, ‘If I can’t have tough conversations with my better players I might as well coach netball’.” This comment riled up Liz Ellis in particular, who labelled the throwaway line as “rubbish”. “Stop making netball a euphemism for “not tough”,” Ellis said on Twitter. “If you are still doing that in 2021, you might need to get out to a game to do some fact-checking.” Stuart apologised for the comments. Well, kind of.

MAN OF THE YEAR

Australia’s male netballers. One of the biggest areas of growth in netball this year was the rise and growing professionalism of men’s netball. After embracing men’s netball was pushed as a key recommendation following netball’s 2020 whole-game review, men’s divisions will now be added to the NSW junior and senior state titles next year, in what marks a huge move for the male game.

WOMAN OF THE YEAR

Maddy Proud. The Swifts captain etched her name in netball folklore after it emerged she led her team to Super Netball grand final glory despite a broken rib. Hard core.

VIRAL MOMENTS OF THE YEAR

Harten fires back. Giants captain Jo Harten encouraged an important conversation about social media bullying in the netball world after a fan told her to “rot in hell” and “die” following her side’s loss by a single goal to the West Coast Fever.

Sam Wallace’s super shooting. The Swifts shooter took Super Netball by storm with her sublime skills this year. In one game in June, Wallace shot 58 consecutive goals without missing a single one.

World Cup 2027 announcement. In April, Netball Australia and the International Netball Federation confirmed Sydney as the host of the 2027 Netball World Cup. Then NSW Premier Gladys Berejiklian met with the stars of Super Netball for the official announcement.

QUOTE OF THE YEAR

“As John Fordham once said to me, ‘Mate any publicity is good publicity as long as they’re spelling your name right’ … I hope netball take it as good publicity for them,” Ricky Stuart in his ‘apology’ to the netball community.

Netball will thrive under the new five-year broadcast deal which will allow fans to watch the sport on Kayo. The Diamonds will bounce back by winning gold at the Commonwealth Games under Liz Watson. Men’s netball will begin to soar and discussion will begin about the possibility of a male national competition.