Home » Sport » Nets are reminder nothing is a sure thing 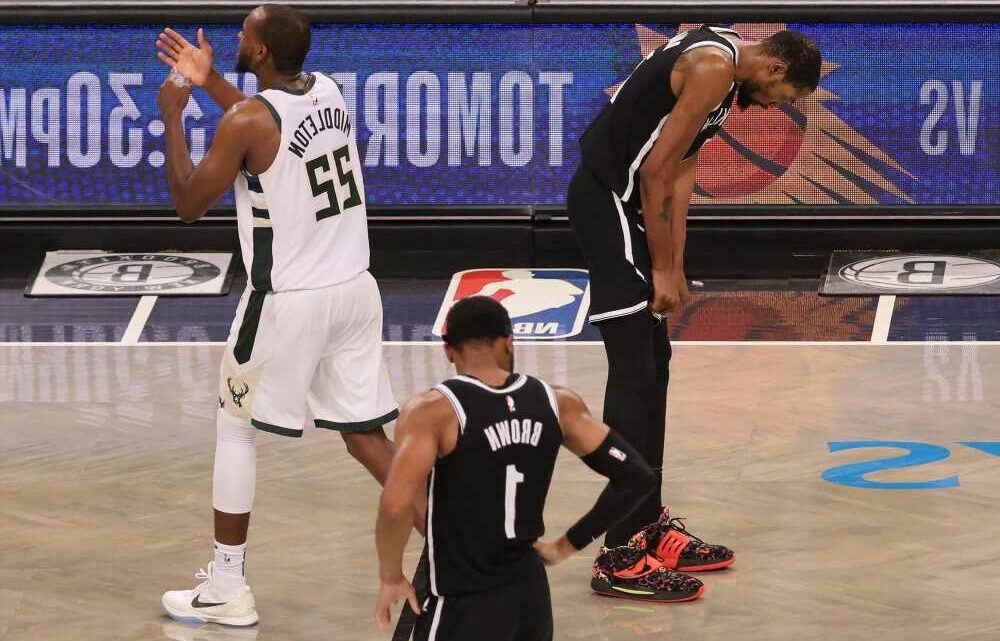 Nets are reminder nothing is a sure thing

What's on line for Nets, Bucks in pressure-packed Game 7

The Nets’ shaky health cost them a berth in the Eastern Conference finals. There’s little question about that. The Bucks showed heart and guts and resilience, they got big games when they needed them from Khris Middleton and Giannis Antetokounmpo. They held serve all three games at Milwaukee’s Fiserv Forum; the Nets couldn’t quite stay invincible at Barclays Center.

All true. All of it. And it doesn’t exactly take a Bob Beamon-esque leap of faith to say that a healthy Kyrie Irving and a healthy James Harden flanking a healthy Kevin Durant would’ve figured out a way to win, at best, one of the games in Wisconsin and, at least, a decisive Game 7 in Brooklyn.

But did the injuries cost the Nets their first NBA championship, which was what so much of the post-Game 7 buzz was about? Steve Nash was asked if he could possibly imagine the ride of these 2020-21 Nets ending short of raising the Larry O’Brien Trophy and etching their names into the NBA history books.

“You could, actually,” Nash admitted. “It’s the NBA. Anything can happen.”

And they happened, with multiplicity, to the Nets. Harden’s injury. Irving’s injury. The Bucks’ escape from Game 3, when they were two possessions away from falling behind 0-3. Durant, at last, running out of fuel at the very end of Game 7, going 0-for-6 in overtime after making that epic game-tying bomb at the end of regulation.

You bet it can.

And that’s why it’s hard to say authoritatively that the Nets would have won the championship if all their parts had stayed intact. They would still have been betting favorites. If the team that emerged from the Celtics series and came out of the Bucks series the same way, it would have been an interesting debate.

But if we’re going to dip a toe in that world, we need to immerse completely.

And that means accepting a couple of other best-case scenarios:

Like Jamal Murray not blowing out his knee for Denver late in the regular season. Like Mike Conley and Donovan Mitchell not getting hurt at the worst possible time for Utah, which finished four games better than the Nets in the far stronger conference. Like Boston having a healthy Kemba Walker and Jaylen Brown, which might have made that first-round series a bit more strenuous (and tenuous, as far as the Nets’ health is concerned).

There were the defending-champion Lakers, clearly compromised by the absence of Anthony Davis for one playoff game and the physical limitations of both he and LeBron James. And Joel Embiid’s knee, which causes Sixers fans to cross themselves every time he jumps (and lands). And the uncertain status of both the Clippers’ Kawhi Leonard (knee) and the Suns’ Chris Paul (COVID-19 protocol).

So, yes. Anything can happen.

The Nets are in a complicated spot as they ponder their approach next year. Clearly now that all of the Big 3 have difficult injury histories, they will be even more vigilant about properly managing a regular season next year that will grow by 10 games. Folks will howl about the fact that they play only half those games together (if that), but the Nets’ entire business plan revolves around those three players.

And the thing is: there’s no guarantee. There was none this year, and the two injuries that did them in against the Bucks were both fluky (the difference between hurting a hamstring and it being perfectly fine is often a mystery; Irving unluckily landed on Antetokounmpo’s foot) and almost inevitable (you rely on older players, regardless of star power, you’re dancing a dangerous dance).

You suspect it will be an especially long summer for Irving. He may occasionally state that championships aren’t his end-all, but the truth is he’s now been deprived on two separate occasions the opportunity to swell his ring collection from one to three. He fractured his kneecap in 2015 with Cleveland, and now this. Neither title was guaranteed. But both times his season ended in street clothes.

The Nets will surely run it back, and do what they can to strengthen a supporting cast that was largely ignored despite one great game from Jeff Green and some fine efforts by Blake Griffin and Bruce Brown. They’ll be next year what they were this year: the most fascinating show in the NBA. Will that be enough to achieve the only goal that matters?

Maybe. Maybe not. It’s the NBA. Anything can happen.

CategorySport
TagsA are is nets nothing reminder