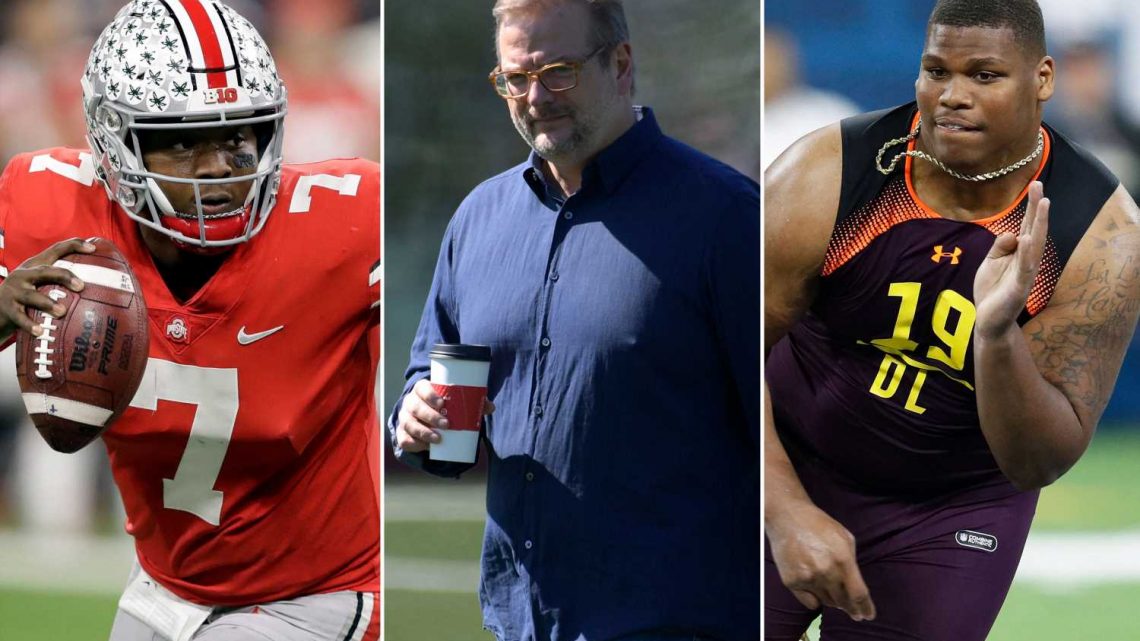 Jets general manager Mike Maccagnan will spend Thursday with a cup of coffee in one hand and his cellphone in the other.

Maccagnan has been open about wanting to trade back from No. 3 in Thursday’s first round of the draft, and nothing has changed. He has been working the phones for weeks, which should continue right up through when the Jets are on the clock.

The Jets believe someone will be willing to move up to either take Ohio State quarterback Dwayne Haskins or one of the top defensive players still on the board at three, such as Alabama defensive lineman Quinnen Williams and Kentucky outside linebacker Josh Allen.

If the Jets do not pull off a deal, the expectation around the NFL is they will take Williams, who is considered by some evaluators to be the best player in the draft. The greater need is at edge rusher, but two sources have said the Jets are not as high on Allen, the top edge rusher expected to be available when the Jets pick. The Jets also have been linked to Houston’s Ed Oliver, but people around the league believe that is a smokescreen.

Ohio State’s Nick Bosa is expected to go second overall to the 49ers. If he somehow fell to the Jets, that could change things.

The biggest question for the Jets entering the draft is whether anyone will be willing to cough up some draft picks to move up to No. 3. The Jets have just six picks and plenty of holes on their roster to fill, and the strength of this draft is in the middle rounds, according to many around the league. That belief has the Jets hoping to move back and grab some of those picks. They traded their second-round pick in last’s year deal with the Colts to move from six to three and eventually draft quarterback Sam Darnold. Someone who knows Maccagnan well said the GM has been eager to get back in the second round ever since that trade.

Finding a trade partner is not easy, though. This draft does not have four quarterbacks projected to go in the top 10 like last year. The Cardinals are expected to select Kyler Murray No. 1 overall, but after that there are question marks. Is there someone who likes Haskins enough to try to get ahead of the Raiders at No. 4 and the Giants at No. 6, teams that have been linked to Haskins?

The Redskins are targeting a quarterback and want to move up. Washington has the No. 15 pick in the first round. Is that too far for the Jets to move back? Maccagnan would not say how far he is willing to drop, but a source indicated it is unlikely the Jets would be willing to fall all the way to 15.

According to the draft trade value chart, the Redskins would have to give up a lot to move those 12 spots. Figure the trade would look something like this: Washington gives up this year’s first-round pick (15), second-round pick (46), its second third-round pick (96), its 2020 first-round pick and a 2020 mid-round pick to get the Jets’ pick.

Quarterback is usually the position that drives the draft-day trade market, but it is possible a team could fall in love with one of the defensive stars at the top of the draft and be motivated to make a deal with the Jets.

While the focus is on the first round, Maccagnan has plenty of work to do in the later rounds. The Jets have needs at cornerback, along the offensive line and they could use some depth at wide receiver in addition to the glaring hole they have at edge rusher.

If Maccagnan can’t pull off a trade in the first round, expect him to be active in the trade market in later rounds to acquire more picks. He has made 12 trades during his four drafts, and that does not include the big one last year that landed him Darnold, which occurred a month before the draft. Linebacker Darron Lee, the team’s 2016 first-round pick, also could be moved during the draft after the team signed C.J. Mosley to a monster free-agent deal last month.

Justin Bieber Responds to Criticism of His Coachella Performance