Home » Sport » N.F.L. Week 17 Predictions: Our Picks Against the Spread 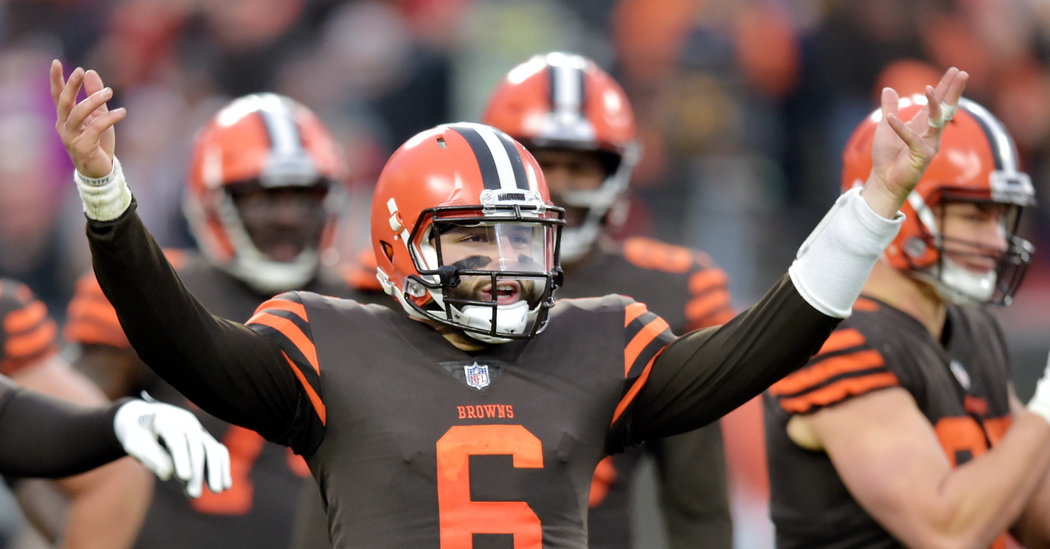 N.F.L. Week 17 Predictions: Our Picks Against the Spread

It has been a season of high scores and close games, and Week 17 offers more than a few nail-biters in terms of playoff races. None is bigger than the fight in the A.F.C. North, where the Ravens are trying to stay on top, the Steelers are trying to right the ship and the Browns are trying to play spoilers.

Here’s a look at N.F.L. Week 17, with all picks made against the point spread.

Browns quarterback Baker Mayfield has nothing at stake but pride now, and that could be great news for the Steelers (8-6-1).

Pittsburgh’s loss to New Orleans last week created some chaos, allowing the Ravens (9-6) to move atop the A.F.C. North, ahead of the Steelers, who were left with a slim chance of making the playoffs.

So now, in simultaneous Week 17 games, the Ravens can clinch the North with a win over the Browns (7-7-1) or by having Pittsburgh lose to the Bengals (6-9). The Steelers would need both a win for themselves and a loss by Baltimore to overtake the Ravens. Pittsburgh could get the wild-card berth in a far-fetched scenario in which it beats Cincinnati and the A.F.C. wild-card play-in game between Indianapolis and Tennessee finishes in a tie.

A particularly fascinating piece of all of this, beyond the playoff implications, is Mayfield’s chance to play the role of spoiler. The top pick in this year’s draft — and once the subject of a magazine profile titled “All He Needs Is Hate” — Mayfield is known for soaking up doubt and criticism, then converting it all into an explosive performance. A Cleveland victory would not put the Browns in the playoffs, but it would give them their third winning season since this version of the team was established in 1999, and it would send a clear message that Mayfield was up to the challenge of the rough-and-tumble North. 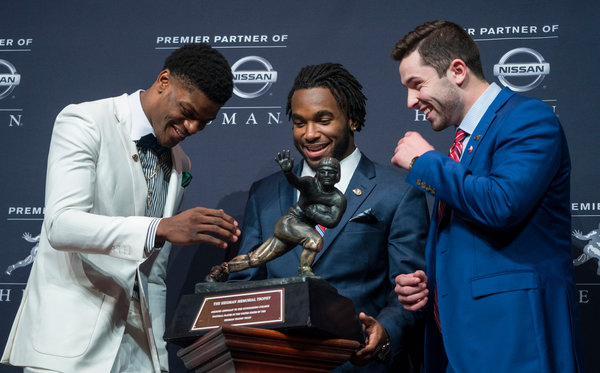 Standing in Mayfield’s way is Ravens quarterback Lamar Jackson, who was selected 31 picks after Mayfield in the draft. The two also faced off as Heisman Trophy finalists in 2016 and 2017. (Jackson won in 2016, Mayfield in 2017.)

Neither quarterback was supposed to succeed quickly in the N.F.L. — many thought Jackson could not succeed as a quarterback at all — but in the second half of the season few have been better.

Mayfield’s breakout came after Freddie Kitchens took over as Cleveland’s offensive coordinator in Week 9. Since then the Browns have been 5-2 and Mayfield has completed more than 70 percent of his passes, with 16 touchdowns and just five interceptions. An injury to Joe Flacco made Jackson the starter in Week 11, and since then, Baltimore has been 5-1. While Jackson’s arm is still a work in progress, he has spearheaded a rushing effort that averaged 218.5 yards a game over the last six weeks.

Mayfield beat the Ravens in Week 5 — back in the Flacco era — but Sunday’s game will be an entirely new challenge for both teams. Nick Chubb, Cleveland’s breakout rookie running back, will face a nearly impossible task trying to run against Baltimore’s terrific front seven, so this game will probably swing on whether Mayfield succeeds against the Ravens’ secondary.

Playing at home and with a playoff spot in reach, the Ravens have the scales tipped slightly in their favor. But this game appears like the kind that will be decided by a field goal or less, rather than the six points Las Vegas has spotted Baltimore.

The Steelers, meanwhile, are likely to win, but beating a division rival by more than two touchdowns seems like a lot to ask. Picks: Browns +6; Bengals +14.5

The race for the A.F.C.’s second wild-card spot — the first will go to either the Chiefs or the Chargers — has been fascinating to watch in the second half. While the Ravens have graduated to competing for a division title, the Colts (9-6) and the Titans (9-6) have fought their way into a virtual play-in game in prime time. The winner gets a playoff spot; the loser goes home. (A tie, however unlikely, could eliminate both teams.)

Coach Frank Reich — who took over the Colts after the coaching job was spurned by Patriots offensive coordinator Josh McDaniels in the off-season — said that his team’s slow start this season could be an advantage in Sunday’s high-stakes matchup.

“I said, 'Hey, guys, this is a playoff game,’” Reich said of discussions with his players. “We’ve been in that mode since we were 1-5, so that’s to our advantage.”

The Colts have not made the playoffs since 2014, and their first six games put them at a huge disadvantage, but with the exception of a letdown against Jacksonville in Week 13 they have been terrific since.

Coach Mike Vrabel of the Titans, also in his first season leading a team, has molded Tennessee as a gritty squad that drags the pace of the game down and turns it into a slugfest. The Titans beat Dallas and New England in back-to-back games in November, but their current four-game winning streak came against fairly weak competition. So how they will handle a team as good as the Colts is a bit of an unknown.

Further complicating things for Tennessee is the fact that Jurrell Casey, the Titans’ mammoth defensive tackle, will be out, and Marcus Mariota, the starting quarterback, might miss the game as well. Oddly enough, given the Titans’ style of play, Casey’s absence could be the bigger problem. Pick: Colts -3.5

The Vikings (8-6-1) undoubtedly came into the year thinking they would avoid having a high-stakes Week 17. They added quarterback Kirk Cousins to a team that reached last season’s N.F.C. Championship Game, but some regression on defense and a few tough outings have left them with a loose grip on a playoff spot.

A win over the Bears (11-4) would give Minnesota the wild-card berth, but a loss could end the Vikings’ season if it comes along with a win by the Eagles (8-7) against the Redskins (7-8). That combination would put Philadelphia in the playoffs.

Chicago can secure a first-round bye with a win (and a Rams loss), but there is no doubt that Minnesota will be pushing harder in this game. And the Vikings need to push hard, because it seems a given that Nick Foles will lead Philadelphia to its third straight win. Picks: Vikings -4.5; Eagles -7

Other Games With Playoff Implications

The Rams (12-3) looked like the presumptive N.F.C. champions after Aaron Donald, Samson Ebukam and the rest of the defense helped the team to a thrilling win over Kansas City in Week 11. At that point Los Angeles was 10-1. But the Rams were 2-2 after that, and the wins were hardly impressive, coming against Detroit and Arizona. Still, the Rams can secure a first-round bye by winning at home against San Francisco. A Los Angeles victory is all but a lock, but the plucky 49ers (5-10) might make the double-digit point spread seem unwise. Pick: 49ers +10

No one is lamenting the lack of a logical successor to Tom Brady or Drew Brees anymore. The future of the quarterback position is in good hands with the Chiefs’ Patrick Mahomes, who in just his second season seems to be inventing an entirely new style of play. He has 48 touchdown passes as a result.

If Mahomes and the Chiefs (11-4) can beat the Raiders (4-11) in Kansas City, they will win the A.F.C. West and secure a first-round bye and home field advantage throughout the playoffs.

If Kansas City loses, Philip Rivers and the Chargers (11-4) could steal the division and home field advantage with a win or a tie against the Broncos (6-9). Pick: Chiefs -13.5; Chargers -6.5

This has not been a typically dominant season for the Patriots (10-5), but they still have a path to home field advantage throughout the playoffs. They must beat the Jets (4-11) and have the Chiefs and Chargers both lose. (And if you think that series of events seems likely, there’s a bridge in Brooklyn that we can have up for sale on Craigslist at a moment’s notice.)

A first-round bye can be secured simply with a win over the Jets. That should be relatively easy at home, but New York is strong enough in its secondary, and quarterback Sam Darnold has progressed enough in recent weeks, to make the enormous point spread a bit insulting. Pick: Jets +13.5

The Texans (10-5) have a path to home field advantage throughout the playoffs, but it is even more convoluted than the one for the Patriots. They would have to beat the Jaguars (5-10), and they would need losses by the Chiefs and Chargers, a loss (or tie) by the Patriots and for the tiebreakers to sort out in a way in which Houston finishes on top of Kansas City. A simpler scenario, in which the Texans win or tie, would give them the A.F.C. South title and at least one home game in the playoffs. Pick: Texans -6.5

The Saints (13-2) have nothing to gain in this game, with a first-round bye and home field advantage throughout the playoffs already secured. But Coach Sean Payton has insisted he has no plans to rest his starters, and the Panthers (6-9) have already shut down quarterback Cam Newton for the year. Pick: Saints -9

The Cowboys (9-6) have already clinched the N.F.C. East, and Ezekiel Elliott has all but clinched his second rushing title (in just his third season). But should Elliott sit out, there is technically a possibility of his being overtaken by Todd Gurley of the Rams (who is unlikely to play) or by Saquon Barkley of the Giants. Barkley will enter this game trailing Elliott by 236 yards. The point spread has increased this week, as people have begun to assume that Dallas will not make much of an effort on the road when it has nothing to gain. But because the Cowboys went into the playoffs flat two years ago, they may surprise everyone and aggressively pursue the win. Pick: Cowboys +7

The Seahawks (9-6) were initially written off by nearly everyone, but they have put together a very nice season, especially given the number of personnel changes they endured. Playing at home against the lowly Cardinals (3-12) does not present much of a challenge, but since Seattle has already secured a playoff spot, there is little motivation to go for a blowout. Pick: Cardinals +13.5

All times are Eastern.

Benjamin Hoffman is a senior staff editor and regular contributor to the Keeping Score column in sports. He joined The Times in 2005. @BenHoffmanNYT • Facebook