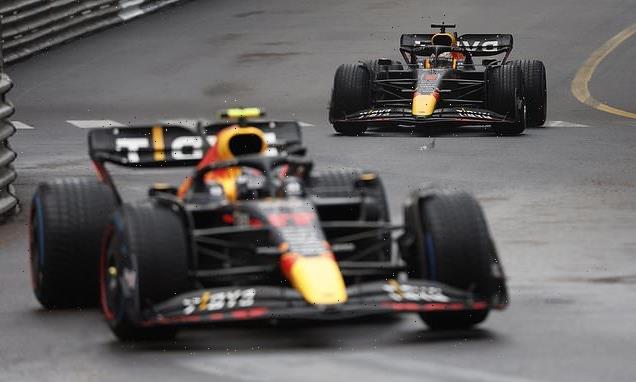 Here is Sportsmail’s live blog for updates as the Formula One campaign continues at the Monaco Grand Prix.

Leclerc has made a bad restart. He’s fallen further behind Verstappen.

Perez leads the cars back out.

Should be going again in about one minute.

The debris has finally been cleared. Almost time to get back underway.

A red flag now to repair the barrier.

The marshals are sweeping away the remaining debris as the safety car continues to lead the drivers around the circuit.

“It’s a very dynamic race out there – we’ve got the call right onto the inter at the right time. Great lap from Checo on his out lap and we managed to get both Ferraris so that was great team work.

“I would be surprised if they red flag this – we should get going again.

“We’re not even half way so there’s a long way to go in this race – we’ve just got to be on our toes.”

Schumacher loses the rear and flies into the barrier. His car is literally split in two but fortunately he’s OK.

Both Mercedes are flying.

Leclerc must be fuming. It was all going so well and now he finds himself fourth.

Sainz produces a stunning save to prevent himself spinning into the barrier.

The front four all pit and it’s worked perfectly for Red Bull.

Perez leads, ahead of Sainz, and Verstappen has moved ahead of Leclerc in third.

Hamilton has a bit of damage on his wing but he’s still right behind ocon, who is just about managing to hold him off for now.

Albon has gone on to slicks. The second driver to do so.

Perez pits from third. The intermediates come on,. Verstappen is still out.

Gasly is driving a fine race and overtakes Ricciardo at Tabac for 12th, just as Perez tells Red Bull team radio that it is “definitely” time for the Intermediate tyres.

Leclerc has over a five-second lead up front with Sainz 2.1 ahead of Perez and Verstappen 1.5 back from the Mexican.

Gasly passes Zhou to move up to 13th.

Leclerc with a lead of 3.30s. He looks very comortable.

Norris is managing to hold off Russell, for now.

Won’t be long until one of the three big teams switches to inters. It’s clear they’re faster.

Vettel is overtaken by Ocon, who moves up to ninth.

Gasly, on the intermediates, has set the fastest lap of the race.

No more rain for the next 30 minutes… could mean a switch to intermediates for some.

Leclerc and Sainz definitely seem to be finding it easier than the Red Bulls.

Almost a collision between Latifi and Stroll as they head into the pits.

Leclerc is already starting to break away.

The safety car is about to head into the pits and then we’ll be racing.

An incident already as Laitfi goes into the barrier. He went in lightly and i able to continue.

The race has started We’re underway behind the safety car.

The rain has got too heavy now. The red flags are out and it could be a while until this one gets underway.

The formation lap in underway. Heavy rain now. There could be a few of these.

“This intensity will be like this for another 10 minutes then lighter for another three minutes.”

One by one, they’re all changing to the wets.

It’s barely spitting with rain but it looks like we could be starting behind a safety car.

And that means everyone is obliged to run the full wet tyres.

Frantic scenes now as the teams decide what to do in terms of tires. Most have intermediates at the moment but some are now switching to wets.

The formation lap is due to start at 2.09pm with the teams expecting heavy rain.

And welcome to Sportsmail’s live coverage of the Monaco Grand Prix.

Charles Leclerc starts on pole with the race due to get underway at 2pm.