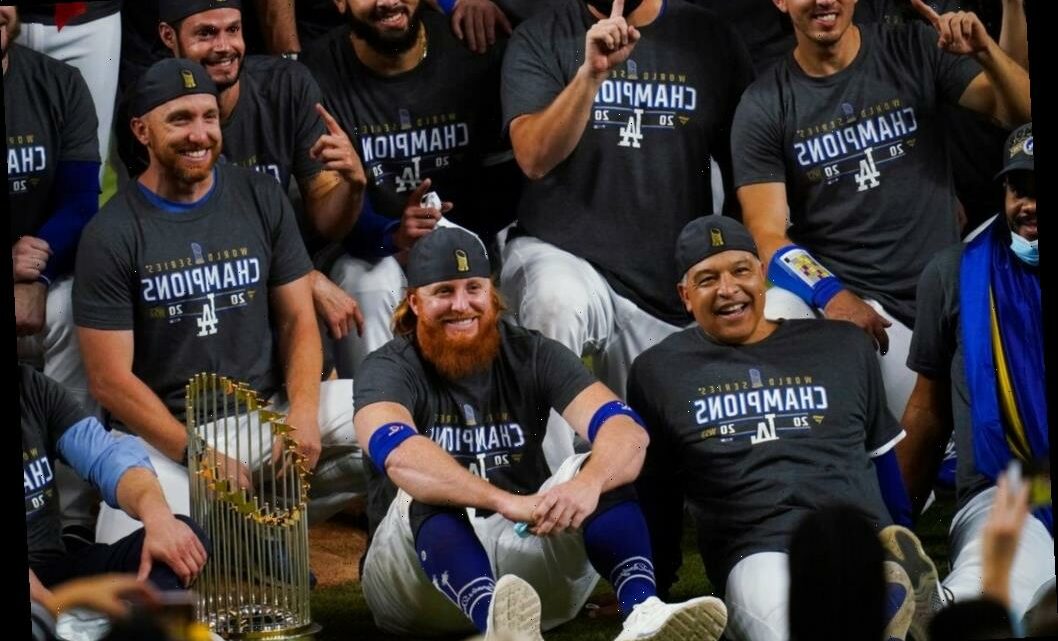 Justin Turner violated coronavirus protocols when he celebrated on the Globe Life field with his Los Angeles Dodgers teammates and he refused instructions from security to leave the field, behavior that Major League Baseball said risked the safety of others.

The commissioner’s office said Wednesday that it is starting a full investigation of the 35-year-old third baseman.

The Dodgers won their first World Series championship since 1988 with a 3-1 victory over Tampa Bay in Game 6 on Tuesday night.

Turner was pulled from the game following the seventh inning after MLB was notified that he had tested positive for COVID-19. He was quarantined in a doctor’s office off to the side, Dodgers president of baseball operations Andrew Friedman said.

Turner later returned to the field with a mask to celebrate the Dodgers’ title. He then took down his mask and posed for a team photo on the field.

“Immediately upon receiving notice from the laboratory of a positive test, protocols were triggered, leading to the removal of Justin Turner from last night’s game,” MLB said in a statement Wednesday. “Turner was placed into isolation for the safety of those around him. However, following the Dodgers’ victory, it is clear that Turner chose to disregard the agreed-upon joint protocols and the instructions he was given regarding the safety and protection of others. While a desire to celebrate is understandable, Turner’s decision to leave isolation and enter the field was wrong and put everyone he came in contact with at risk. When MLB Security raised the matter of being on the field with Turner, he emphatically refused to comply.”

Turner’s agent, Greg Genske, did not immediately respond to a text from The Associated Press seeking comment.

On Wednesday, both teams were still at the Dallas area hotel where they had spent the World Series.

“Last night, nasal swabs were conducted on the Dodgers’ traveling party,” MLB said. "Both the Rays and Dodgers were tested again today and their travel back to their home cities will be determined after being approved by the appropriate authorities.”

The commissioner’s office said it will consult with the players’ association as part of its investigation. The union was in the process of gathering facts on the events.

Turner hit .307 with four homers and 23 RBIs in the pandemic-shortened season and .293 (17 for 58) with three homers and six RBIs in the postseason, including .320 with a pair of solo homers in the World Series.

“Having a mask on and staying socially distanced, he want to come out and take a picture with the trophy, which can’t state strongly enough how big of a role he’s played in the success of this organization,” Friedman said.

“But I think for him, just being a free agent, not knowing exactly how the future is going to play out. I don’t think there was anyone that was going to stop him from going out," he said. "I think from at least my perspective and not watching it super closely with everything going on, but I think he was mindful of other people, especially other people that he hadn’t already been in contact with. This is something that we’re going to wrap our arms around tonight and in the morning and figure out where we’re going from here.”

Turner, however, was visible on the field without a mask during the celebration. And Dodgers manager Dave Roberts was nearby, also not wearing a mask.

“I haven’t seen the pictures,” Friedman said. “If there are people around them without masks, that’s not good optics at all. I haven’t seen them, so it’s hard for me to speak to it specifically."

“But I think from our standpoint, I think the people who were around him were people that would be in the contact tracing web, anyway, with just how closely a lot of us have been around each other,” he said. "And so now I think the subsequent tests we’re going to take are really important to figure out what we do and to make sure that any of us that are potentially positive do not spread it to other people.”

Brad Pitt and Nicole Poturalski Split: They’ve ‘Been Over for a While’
World News