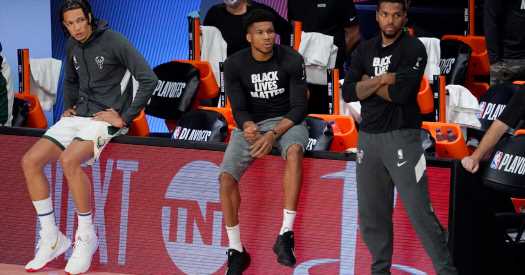 Giannis Antetokounmpo, the Milwaukee Bucks star, won his second straight Most Valuable Player Award, after another stellar regular season, the N.B.A. announced Friday. He became the first repeat winner of the N.B.A.’s top individual honor since the Golden State Warriors’ Stephen Curry in 2015 and 2016. At 25 years old, Antetokounmpo is the first back-to-back winner at that age since LeBron James in 2009 and 2010.

Antetokounmpo bested his numbers from last year, averaging career highs in points (29.5) and rebounds (13.6) in fewer minutes, while leading the Bucks to the league’s best regular-season record. He also won the N.B.A.’s Defensive Player of The Year Award.

Antetokounmpo’s coronation as the most valuable player comes at an awkward time: The Bucks lost their second-round series with the Miami Heat in five games after being favored to go to the finals. They instead fell short of last year’s conference finals appearance, with Antetokounmpo relegated to the bench in the final game after sustaining an ankle injury in Game 4. It is reminiscent of 2007, when Dirk Nowitzki won the honor weeks after the top-seeded Dallas Mavericks were knocked out of the playoffs by the eighth-seeded Golden State Warriors.

Next season, Antetokounmpo will attempt to become the first N.B.A. player to win three straight M.V.P.s since Larry Bird from 1984 to 1986. In March, Antetokounmpo told reporters that winning the award again is “not important at all” to him.

Antetokounmpo received 85 of 101 first-place votes, while LeBron James, going for his fifth M.V.P. award, came second with 16 first-place votes. (The New York Times does not participate in awards voting.)

Antetokounmpo is affectionately known as the Greek Freak, a reference to his unusually long wingspan and his home country of Greece, where he grew up. The son of Nigerian immigrants, Antetokounmpo was drafted by Milwaukee with the 15th pick in the draft in 2013. He was only 18. Antetokounmpo entered the league as a slender, raw talent with lots of potential, but it did not take long before he turned himself into a force. His first All-Star game came in 2017, the same year he won the Most Improved Player Award. But his rise continued from there, culminating with his first M.V.P. award last season.

Now, after the Bucks’ loss to the Heat, Antetokounmpo has a big decision to make soon: Long a subject of speculation, he is slated to be a free agent after next season.

Sen. Chuck Schumer pushes Save Our Stages Act to save Broadway
World News