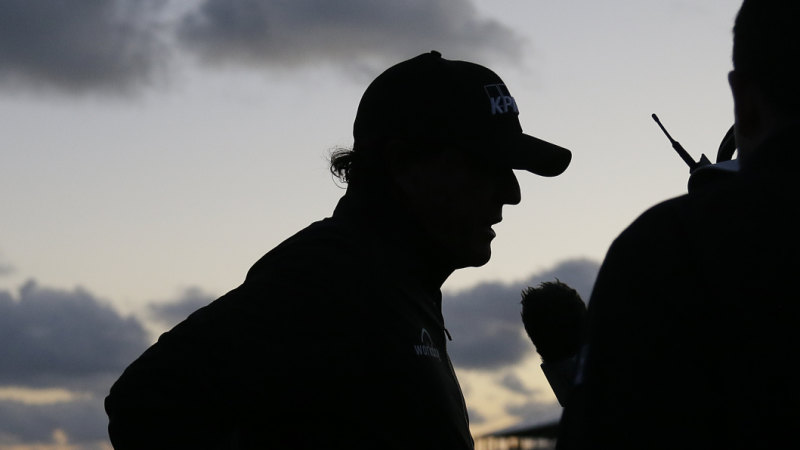 Phil Mickelson and Paul Casey will finish the final two holes of the Pebble Beach Pro Am on Tuesday (AEDT) after disagreeing on whether to press on when darkness fell on Monday.

At 18 under par and with a three-shot lead, a frustrated Mickelson wanted to race through the par-three 17th and par-five 18th despite Englishman Casey saying he couldn't see. 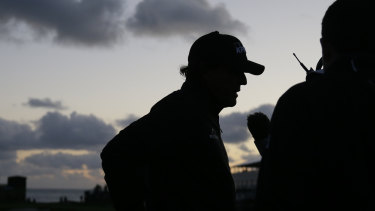 Phil Mickelson talks with reporters at Pebble Beach after play was halted for the second time.Credit:AP

The final round was suspended for two hours earlier in the day due to heavy rain and hail.

The final pairing will return at 8am on Monday, local time, with Casey facing a short par putt at the 16th to stay at 15 under.

"If I'm not going to get done, let's just call it right now."

Mickelson is gunning for his fifth victory at the Pebble Beach Pro Am and, despite the sun already setting, attempted to convince a rules official to let them finish the round.

"I get exactly where Paul is coming from; I have pretty good vision, so I could see fine and I am playing well … I wanted to keep going," Mickelson said.

"But [coming back] is a good thing; we'll play the last couple holes in perfect conditions."

American Scott Stallings shot 66 to post a 15-under score.

Australia's Jason Day was in one of the last groups to finish before sunset and carded a four under par 68.

At 13 under, he cannot finish worse than a tie for fourth place.

Day now has six top-six results in 10 starts at the celebrity-laden Pebble Beach tournament but was frustrated that victory still eludes him.

"It was disappointing not to play well in the third round, but overall it was a good solid week," he said.

"The ball striking was very good but I didn't putt well at all this week."

Curtis Luck was next best of the Australians, finishing in a share of 28th at six under courtesy of a final-round 71.

Matt Jones was a further three shots back with his even-par 72 leaving him tied 53rd, while fellow Sydney native Cameron Davis dropped six shots during a 78 that plummeted him to three over.

February 4, 2019 Will Be The Best Week For These Zodiac Signs Because It’s Still Aquarius Season