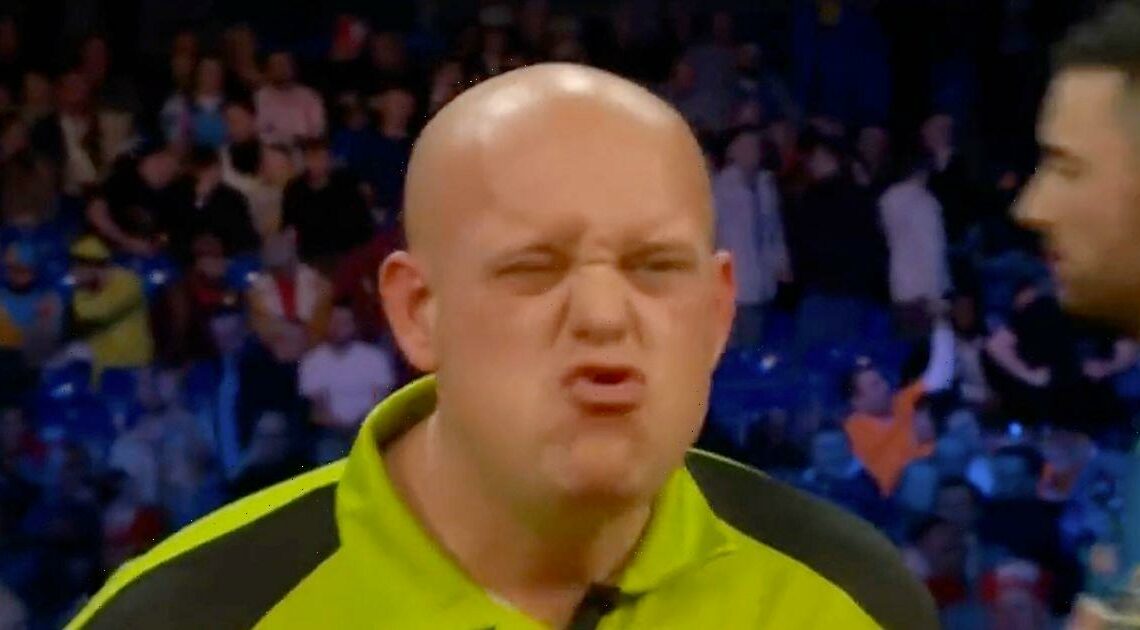 Michael van Gerwen 'channelled his inner Ted Hankey' with a bizarre range of facial expressions after being accused of coughing by Luke Humphries during their second-round match at the Ladbrokes Masters.

The incident occurred during the 19th and final leg of their pulsating clash at the Marshall Arena in Milton Keynes on Saturday night.

In a game that flipped one way and then another, Humphries looked to have done enough to close out victory when he made it 9-7.

But the Green Machine came roaring back to make it 9-9 after Cool Hand missed an incredible five match darts in the 18th leg of the tie.

MVG showed his class to leave 32 after nine darts in the deciding leg when Humphries became agitated at the Dutchman, shaking his head and giving him a disapproving look.

As Humphries returned from the board, van Gerwen appeared to take issue with the Englishman's claims and launched into a bizarre range of facial expressions as he went up to throw.

Do you think MVG coughed? Let us know in the comments section.

Darts fans loved MVG's strange contortions and some joked he was channelling the legendary Ted Hankey after incredible footage of The Count went viral earlier this month.

Another added: "Somebody needs to do a meme of MVG with that expression."

Van Gerwen missed his first three darts at double but returned to the board with Humphries sat on 182 to check out 32 and book his place in the quarter-final.

The pair then exchanged words after the match but seemed to make up as they left the stage.

In his post-match interview, MVG explained the altercation and revealed that Humphries accused him of coughing.

He said: "He said I was coughing. He was 200 points behind anyway.

"It’s not too smart for him to make that comment. He can only put himself into problems.

"No one wants that. You want to win a game fair."

"Games like this are always tough," he added. "I was far from my best tonight, I struggled to get myself going.

"I was trying too hard, I don’t know why. I made mistakes and you can only blame yourself."

I Had to Leave My Home State to Get an Abortion, and I'm Concerned For Other Young People Like Me
World News