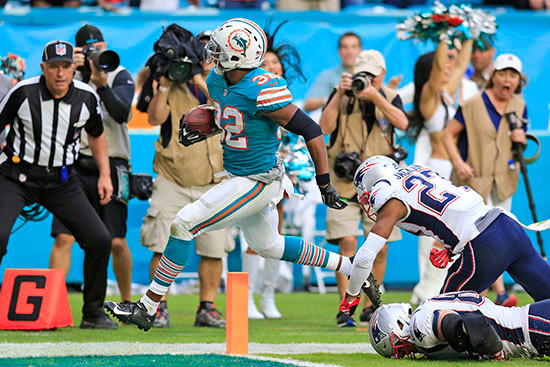 Miami Miracle was calamity of Belichick and Brady errors

If you are a Dolphins’ fan, then sure, call it a Miami Miracle.

But New England fans know what it really was: a meltdown of epic proportions.

It was first-and-69 yards to go for the Dolphins. Six seconds were on the game clock, and the Patriots led, 33-28, in the fourth quarter.

“The play kind of got messed up,” Tannehill said. “I saw Kenyan there, I said [to Parker], ‘Pitch it! Pitch it!’ He pitches it, Kenyan came back inside. … Then I saw him and [Rob Gronkowski] about 10 yards away. I said, ‘Gronk’s on the field? We got this!’ So, yeah, it was pretty amazing. I was following behind and I actually just turned around and collapsed just with the emotion of the whole thing.”

It wasn’t a Hail Mary. This was what Belichick called a “Desperado.” Tannehill threw it short, and his receivers and running back took it from there.

“We missed a lot of opportunities,” he said.

Gronkowski, who hauled in eight passes for 107 receiving yards and a touchdown, accepted blame.

“The way it ended sucked,” he said. “Never been part of something like that. Have to make that tackle”

By the time Drake scored, it was the longest play from scrimmage to win a game with no time remaining in the fourth quarter since the 1970 merger.

The Patriots continued to make plenty of history. Tom Brady, who completed 27-of-43 passes for 358 yards and three touchdowns, surpassed Peyton Manning on the all-time career touchdowns list, but it will be the systemic failure that all in attendance will remember most from Sunday.

Belichick wasn’t the only one who made a mental mistake in positioning his defense on the final snap. Brady admitted to believing he had another timeout after taking a sack that cost New England a chance at three points.

“That should never happen,” Brady said.

“It came down to one play,” Belichick said. “They just made one more play than we did. Just gotta do a better job in every area.”

Do your job, Bill. Like Brady said, it never should have happened.

Say this for the Ravens: They made Kansas City play a full four quarters and then overtime before allowing the team with the best record in the AFC to leave with a victory. Kansas City kicked a field goal to win, 27-24, at home.

Patrick Mahomes proved to be on point in outlasting his counterpart, Lamar Jackson, the rookie who has re-energized Baltimore’s offense.

“We played a heck of a game. Just didn’t get it done,” said Jackson, who threw for 147 yards and rushed for another 71 yards. “We’ve got to regroup next week and get ready for our next game.”

In a battle of young quarterbacks, Mahomes flashed his brilliance with a no-look pass to his left, a 48-yard heave to Tyreek Hill on the run and 377 yards in the air.

Jackson kept pace into the extra session. Both quarterbacks had a pair of touchdowns. Jackson lost a fumble; Mahomes was picked off.

Coop’ there it is!

The Raiders picked off the Steelers for a rare win in Oakland, but it is quite clear who won the immediate aftermath of the trade that sent wideout Amari Cooper to Dallas for a first-round pick.

Cooper caught three touchdown passes in the Cowboys’ 29-23 overtime victory against the Eagles. Cooper totaled 10 receptions for 217 yards. His final touchdown catch came when a ball thrown by quarterback Dak Prescott was deflected by Eagles cornerback Rasul Douglas and caromed to Cooper, who secured the ball and strolled into the end zone.

“I just stayed with the ball,” he told Fox afterward. “and thank God.”

Prescott finished with 455 yards in the air and four touchdowns.

Add tailback Ezekiel Elliott’s 113 yards on the ground and 79 receiving yards and you have a three-pronged balanced offense.

Dallas is now 5-1 since Cooper came aboard. He has eclipsed the 150-yard mark in two of the last three wins, and the team now has a two-game lead on both the Eagles and Redskins in the NFC East.

What flowed elsewhere else froze up for the Rams in Chicago.

Quarterback Jared Goff threw four interceptions, completed less than half of his 44 pass attempts and recorded a season-low 180 yards in the air during a 15-6 loss on the road. Tailback Todd Gurley II was limited to 28 yards on the ground.

Mitchell Trubisky wasn’t much better for the Bears. He was picked off three times, but found offensive lineman Bradley Sowell for a 2-yard touchdown pass that sealed the game.

It was only the second loss of the season for the Rams, but it also served as a reminder that Chicago’s defense will be a force to be reckoned with come playoff time.

Play of the Day

It was fourth down and 9 yards to go from his own 40-yard line with 1:29 remaining in regulation when Mahomes took the snap in the shotgun and rolled to his right. His Chiefs were down, 24-17, and two members of Baltimore’s pass rush forced Mahomes to accelerate his rightward movement. Nearing the Ravens’ sideline and eyeing Hill’s attempt to get open in the middle of the field, Mahomes unloosed a throw deep on the run. Hill caught the ball, eluded two would-be tacklers and picked up an additional 15 yards after the catch. It set up the score that tied the game to send it to overtime. The Chiefs eventually won, 27-24. “I mean, Pat makes unbelievable throws every game, it’s just the kind of player he is,” Kansas City tight end Travis Kelce said. “You’re never dead on any play as a wide receiver, tight end or running back in the routes.”

Joe Philbin commenced his tenure as the interim coach of the Packers by losing a pair of challenges in the first 83 seconds of the game against the Falcons. So it goes. Quarterback Aaron Rodgers (21-of-32 for 197 passing yards and 2 TDs) and tailback Aaron Jones (78 rushing yards and 1 TD) helped push the Pack past the Falcons despite Philbin’s foibles. “The guys knew, basically by the way I was playing, I was willing to put my butt on the line,” Rodgers said. “I took a couple of shots, and was dealing with a bit of a sore back, but I liked the way that we fought up-front.”… There was a Jarvis Landry sighting on the field in Cleveland’s 26-20 victory over Carolina. Odell Beckham Jr.’s BFF finally put together back-to-back performances in his first campaign as a Brown with 54 rushing yards and one rushing touchdown, as well as 57 receiving yards and a receiving touchdown. … Not to be lost in Miami’s final-play win were the 92 yards gained by Frank Gore, who is now 35 years old. … It was a blocked punt by Taysom Hill that sparked the Saints to rally for a 28-14 win at Tampa Bay. New Orleans was down 14-3 when Hill got his block, and the Saints went on a 25-0 run.

1. Andrew Luck: Captain Comeback collected another pelt on his return tour. The Texans were the talk of the league until Luck completed 27-of-41 passing attempts for 399 yards and a pair of touchdowns. Pardon the one interception.

2. Kenny Stills: The Miami wideout opened his team’s scoring with a 7-yard touchdown catch, hauled in another for 43 yards and made the last catch of the game for 15 yards on the game winner. He finished with a total of 135 yards.

3. Tyreek Hill: The most energetic Chief is also the one with the best hands. He kept his routes going all day to haul in a long of 48 yards and a total of 139 yards.

QUOTE OF THE DAY

“It seems in those situations that I have some sort of cloak of invincibility in that not many guys are going to punch me or throw me down if I get in the mix. I know my role and it is kind of peacemaker at that time to get our guys out of there.”

WWE superstar John Cena says he owes The Rock so much