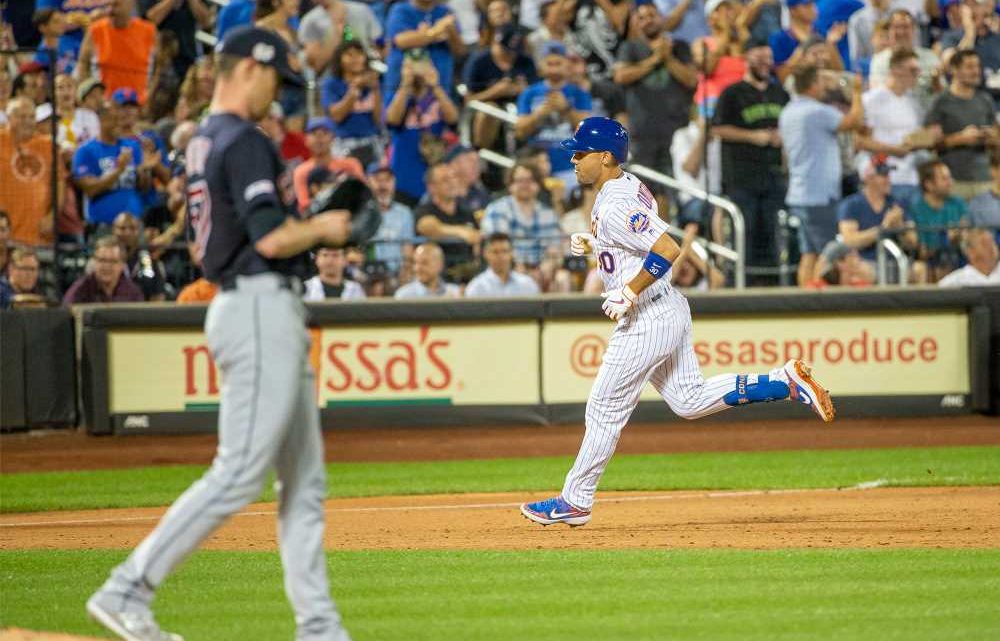 The Indians put one on a tee for the Mets. Michael Conforto crushed it and his teammates followed suit to start off a huge homestand in style.

Returning to Citi Field on Tuesday night for a critical nine-game stretch against three playoff teams, the Mets got a break and ran with it as Conforto’s go-ahead home run opened the door to a 9-2 win over the Indians.

A sixth-inning fielding error by Oscar Mercado — dropping Joe Panik’s pop-up to shallow left field — gave the Mets (65-60) an extra out to work with and Conforto made the Indians (74-52) pay, dropping a two-run shot into the home bullpen for the 4-2 lead. The Mets then piled on with a four-run seventh inning against the Indians bullpen to put the game out of hand, continuing their torrid run as they chase a playoff spot in the final two months of the season. They entered the day just two games back of the final NL wild card.

Steven Matz tamed a dangerous Indians lineup and got some help from Justin Wilson to escape a jam in the seventh inning. After getting pulled early after six innings his last time out — which led to a loss to the Braves — Matz got to start the seventh but only recorded one out before putting two runners on.

Manager Mickey Callaway called on Wilson to get out of the jam against the top of the order and he did so successfully, striking out Francisco Lindor and Mercado to keep the two-run lead intact.

The Mets gave themselves some breathing room in the bottom half of the inning, with RBI singles from Amed Rosario and Panik and a two-run double from Pete Alonso stretching the lead to 8-2.

Rajai Davis, called up from Triple-A Syracuse earlier in the day to face his former team, added an RBI double in the eighth, while relievers Luis Avilan and Paul Sewald finished off the Indians.

The Mets had been on the wrong end of a fielding error earlier in the night. The Indians tied the game 2-2 in the fourth inning with some help from Todd Frazier, who could not backhand a ground ball from Yasiel Puig. Jose Ramirez and Jason Kipnis followed with back-to-back singles up the middle, the second scoring Puig. Matz worked himself out of trouble, though, leaving runners on the corners by striking out Shane Bieber with a full count.

J.D. Davis welcomed himself back to the starting lineup by crushing a two-run home run to center field in the second inning to put the Mets ahead 2-1. A calf injury had limited Davis to pinch-hitting duty over the weekend in Kansas City but he cleared pregame testing and looked just fine rounding the bases.

Kipnis had ripped a Matz changeup for a solo shot in the top of the second to give the Indians a 1-0 lead.

Harry and Meghan, we don’t all have mega-rich pals to offset our carbon footprints – The Sun

How Arsenal could line up after January transfer window with Rugani, Zaha and Bellerin back in the XI – The Sun
World News