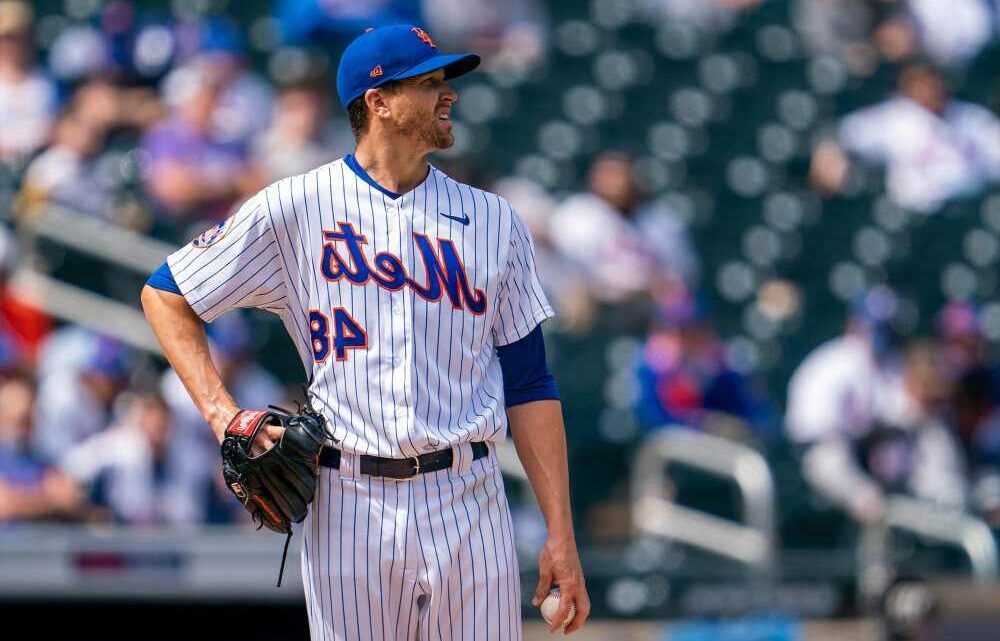 After all the darkness, Baylor deserved this One Shining Moment

Jalen Suggs' parents not surprised by his March Madness heroics

It must have sounded like a capacity crowd at Citi Field to beleaguered Michael Conforto when the boobirds rained jeers down on him in the sixth inning.

The last thing Mets fans will accept is yet another betrayal of Jacob deGrom, much less on a day when he tied a career high with 14 strikeouts and was victimized by one mistake in a 3-0 loss to the Marlins on Saturday. But when Conforto whiffed for the third time against Trevor Rogers with deGrom on third and Brandon Nimmo on first, you could bet that the angry mob wished that third base umpire Ron (Mea) Kulpa were behind the plate again for another hit-by-third strike, walk-off or not.

Or wished that Steve Cohen had pinch-hit for him.

Or for everyone else in a Mets lineup that is taking the old baseball theory that the pitchers are ahead of the hitters at this time of the season to new heights, because Pete Alonso struck out to end the inning.

The faces in the dugout change — from Terry to Mickey to Luis — and deGrom pitching like the modern-day Tom Seaver becomes an exercise in futility and frustration anyway.

“He knows that we’re not trying to go out there and sabotage him,” Brandon Nimmo said.

It might be true that the Mets are sabotaging themselves by pressing and squeezing the bat … especially Conforto, who may or may not be weighed down by contract talks in a holding pattern, especially wanting so badly to reward deGrom for his Franchiseness. The Mets are 6-41 (.146) with RISP.

DeGrom was asked about the fact he has a 2.06 ERA since 2018, but the Mets are six games below .500 in games he has started nevertheless.

As always, deGrom took the high road. Is it any wonder why his teammates adore him?

“I try to control what I can control, and that’s getting ready for my next start,” deGrom said. “I hadn’t seen that stat. These guys are great. They’re going out there giving 100 percent. Today we just got beat.”

DeGrom lasted eight innings and 95 pitches and watched Edwin Diaz pour gasoline on a 1-0 deficit in the ninth. DeGrom reached 101 mph on a day on which he was pumping 100 mph fastballs as late as the eighth inning.

DeGrom struck out four of the first five Marlins. Then he made his 100.4 mph mistake up and over the plate on an 0-2 count in the second inning — and Jazz Chisholm Jr. launched it high into the right field stratosphere to make it Marlins 1, Mets 0. That marked the first time in deGrom’s career he had surrendered a home run on an 0-2 pitch.

“He beat me to that spot,” deGrom said.

DeGrom was mostly pumping 98 and 99 mph fastballs for a short while before muscling back up to 100 in the fourth before employing a changeup which he had eschewed in his first start.

He got Starling Marte to look at a 99 mph heater for his 11th K in the sixth and another 99 mph pitch up in the zone that Jesus Aguilar waved at for No. 12. Garrett Cooper was No. 13 in the seventh. Chad Wallace was No. 14 in the eighth on a 99 mph fastball.

“An outing like that,” Rojas said, “you can call it a waste.”

The Mets hitters owe deGrom an apology. Again. Rojas indicated that Conforto has no lock on the 3 hole in the lineup.

“There will be a time where we’ll put up 10 runs for Jake,” Nimmo said.

Hopefully he didn’t mean over the rest of the season.