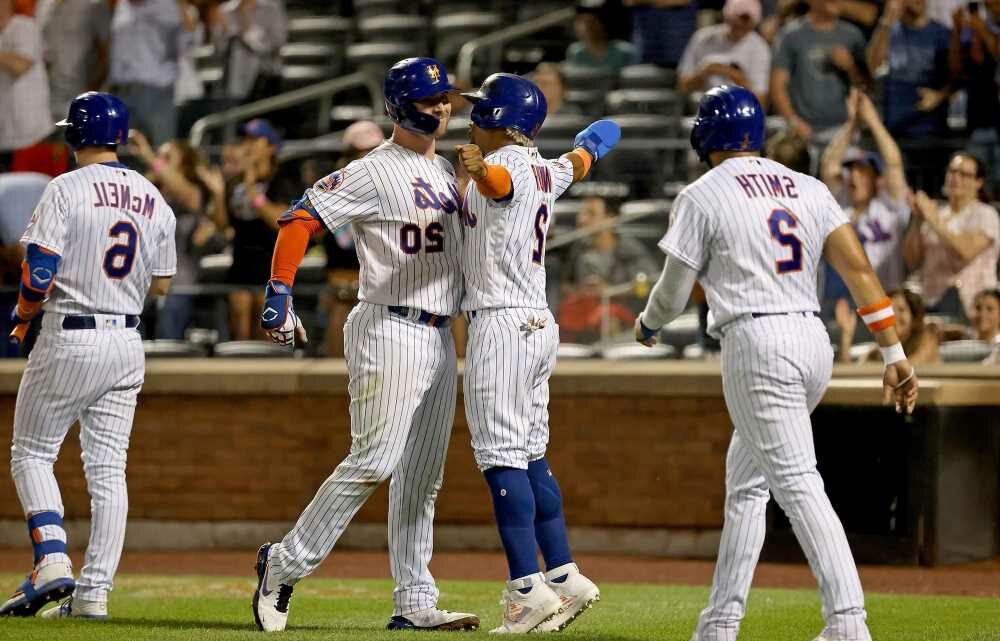 Mets erupt for 10-run inning in rout of Pirates

The Mets are sick of all these doubleheaders

For one glorious inning against an underwhelming opponent, a Mets lineup that has sputtered for most of this season had all the answers.

It became a party, and by the time it concluded a “10” had been crammed into the sixth-inning scoring column. Call it a perfect 10.

Francisco Lindor and Pete Alonso fired the cannon-shots, two homers totaling seven runs that led the Mets to a 13-4 sinking of the Pirates at Citi Field. The game endured a 41-minute rain delay with the Mets batting in the eighth inning and leading by 10 runs.

Lindor unloaded with the Mets’ first grand slam of the season in the sixth, punctuating an inning that only ended after 13 batters had come to the plate. Alonso’s three-run homer was the Mets’ other monster smash in the frame.

The Mets entered the night 29th in MLB in scoring at 3.65 runs per game — the Pirates were the only team behind them — but with Brandon Nimmo’s return atop the lineup in the past week, they have appeared more formidable.

Nimmo reached base twice in the sixth inning alone and three times overall as part of the onslaught. Jonathan Villar slugged two homers to become the 10th player in franchise history to go deep from both sides of the plate in the same game.

Most of the damage occurred against Pirates starter JT Brubaker and reliever Sam Howard, who combined to surrender 11 of the runs. After Dominic Smith’s RBI single in the sixth put the Mets ahead 3-2, Alonso brought in three additional runs by clearing the fence in right-center for his 16th homer of the season.

But that was hardly the end of it. After the Mets loaded the bases on a single and two walks, Jose Peraza was hit by a pitch and Nimmo walked, extending the lead to 8-2. Lindor followed with an opposite-field grand slam to left-center.

The Mets (46-38) won for the fifth time in seven games, and their scoring total was one short of their season high, a 1-4 rout of the Orioles on June 9. Over the next two days, the Mets and Pirates will play three games to close the first half.

In his shakiest home start of the season, Taijuan Walker allowed two earned runs on four hits with three walks over five innings. It followed an outing at Yankee Stadium in which Walker took a no-hitter into the sixth before surrendering a homer to Aaron Judge.

Walker plunked Michael Perez in the second inning to force in a run, but then pulled a great escape by striking out Jared Oliva and getting the pitcher, Brubaker, to hit into a double play. John Nogowski’s double, surrounded by two walks, loaded the bases with nobody out.

Adam Frazier delivered an RBI single against Walker in the fifth that tied it 2-2. Oliva doubled and stole third before Brubaker walked with one out. The leadoff hitter, Frazier further displayed why he’s such a hot commodity heading to the trade deadline, lining a single to right field for the run. Frazier began the night with a .326/.396/.461 slash line.

Villar homered leading off the third to get the Mets their first run. James McCann blooped a single with one out and scored on Nimmo’s double to right-center. Nimmo began the night with an .864 OPS since his return from the injured list last weekend.

Are university tuition fees about to be cut to £7,500?