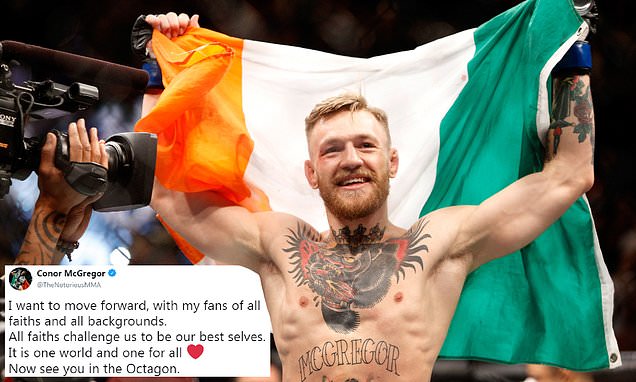 McGregor backs down on ‘racist’ comments and hints at return

‘I want to move forward with my fans of all faiths and backgrounds… now see you in the octagon’: Conor McGregor backs down on ‘racist’ comments and hints retirement plans may be on hold

Conor McGregor has backed down on his recent ‘racist’ comments towards the wife of rival Khabib Nurmagomedov, while dropping a hint that his UFC career may not yet be over.

The fiery McGregor has been trading bitter words with fellow cage star Khabib in recent days, after making the public announcement of his retirement from the sport.

McGregor upped the ante by posting an image of of the Dagestan fighter’s wife wearing an Islamic veil on their wedding day along with the caption: ‘Your wife is a towel mate.’ 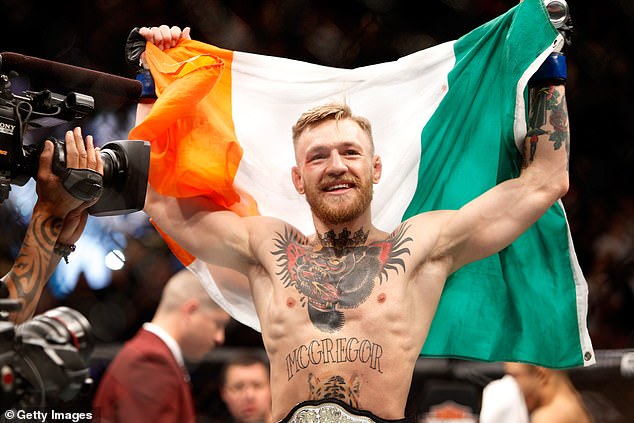 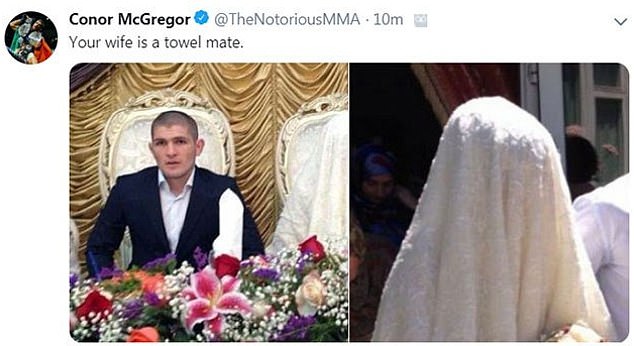 During the late night flurry of tweets McGregor’s account also took aim at the Russian’s brother, tweeting ‘I smacked your brother around and took a s*** in this hat’.

The Irishman’s words were immediately met with uproar, provoking McGregor to delete the tweet before later going on to add a very brief statement. 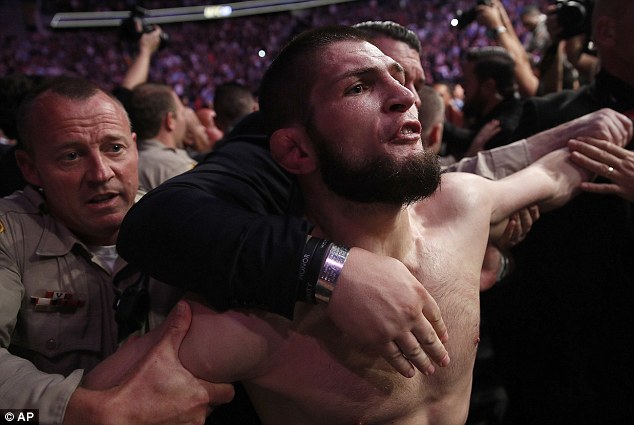 ‘I want to move forward, with my fans of all faiths and all backgrounds,’ said McGregor.

‘All faiths challenge us to be our best selves. It is one world and one for all. Now see you in the Octagon.’

The final line of the tweet got many fans speculating, given McGregor has only recently called time on his fighting career.

Khabib himself had recently doubted 30-year-old McGregor’s claims that he was done with the sport, and felt it was all a stunt.

‘Speaking on Tuesday in his native Russia at a Moscow university, Nurmagomedov said McGregor ‘couldn’t reach a deal with the UFC and it’s so they feel they’ve lost him and they could lose money.’ 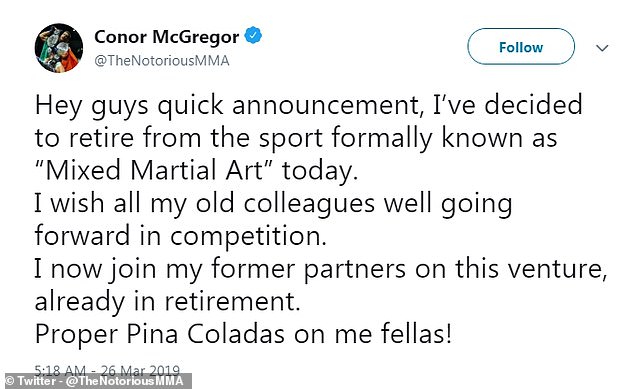 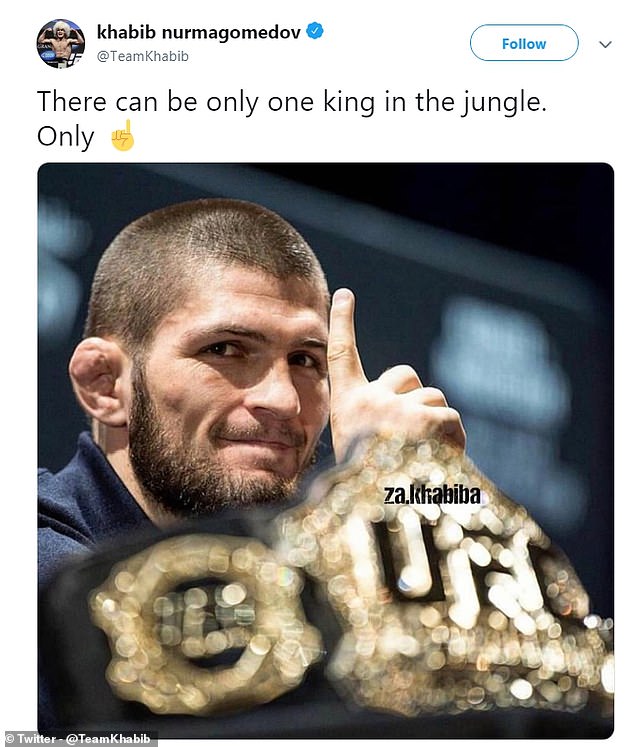 McGregor previously retired in April 2016 but reversed the decision two days later and returned to the UFC.

The 30-year-old Irishman hasn’t won a fight since beating Eddie Alvarez in November 2016 to become the first UFC fighter to hold championship belts in two divisions at once.

On October 6 McGregor and Nurmagomedov were involved in a post-match brawl for which he and the Russian were handed lengthy suspensions and large fines by the Nevada State Athletic Commission.

Ever since there has been bad blood between the pair and it was further fulled when Nurmagomedov insisted there ‘can only be one king in the jungle’ in a tweet responding to McGregor’s retirement announcement.

February 17, 2007: Conor McGregor makes his MMA debut against Ciaran Campbell and wins in the first round by knockout

March 9, 2008: McGregor makes his professional debut and beats Gary Morris in the second round

June 28, 2008: The Irishman’s eagerness to build up his record sees him run before he can walk as he suffers his first defeat at the hands of Lithuanian submission expert Artemij Sitenkov

2009: In a surprise move, McGregor elects to take the entire year off from professional competition as he looks to focus on his technique

October 9, 2010: After almost two years out of the sport, McGregor makes a winning return against Connor Dillon in Chaos Fighting Championships

March 12, 2011: It takes McGregor just 16 seconds to knockout opponent Mike Wood and the referee steps in to end the non-contest

April 6, 2013: He makes UFC debut against Marcus Brimage in Sweden on preliminary card for Gegard Mousasi vs Ilir Latifi. The bout was stopped in the first round and McGregor won by knockout

August 17, 2013: McGregor backs up victory over Brimage by beating Max Holloway, only to tear his anterior cruciate ligament during the bout and he needed surgery, keeping him out of action for up to 10 months

January 18, 2015: After beating Dennis Siver, McGregor jumps out of the cage to confront Jose Aldo as the pair were to go head-to-head in Las Vegas in the Irishman’s first world title shot

July 11, 2015: Aldo pulled out through injury and so McGregor went on to beat for the interim featherweight belt

December 12, 2015: Finally he had the title shot he desired and given Aldo had not lost in years, McGregor’s victory after 13 seconds set a new record for the fastest UFC knockout in a title bout. The bout generated 1.2m pay-per-view sales placing it as second highest in UFC history at the time

March 5, 2016: Having reached the peak with the world title, McGregor was brought back down to earth with a submission defeat to Nate Diaz at the MGM Grand in Las Vegas

August 20, 2016: Reeling from the loss, the Irishman swiftly agrees a rematch with Diaz and this time wins the contest by majority decision

November 12, 2016: Holding off from a trilogy bout so soon after gaining revenge on Diaz, McGregor takes on Eddie Alvarez and wins the UFC Lightweight Championship to become the first UFC fighter to hold titles in two different weight classes at the same time

August 26, 2017: After taking time out of UFC – seeing him stripped of his featherweight title in the process due to inactivity – for the birth of his first child, McGregor’s notoriety saw him land a boxing contest with Floyd Mayweather. The Irishman lost but secured a $100m payday

October 6, 2018: Further inactivity saw him stripped of his lightweight title but he made his UFC return in Las Vegas for an eagerly-anticipated clash against Khabib Nurmagomedov which he lost. The fight descended into chaos with a post-bout brawl and both fighters were handed suspensions