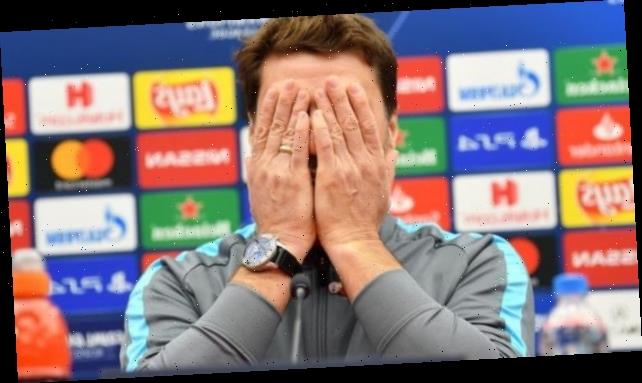 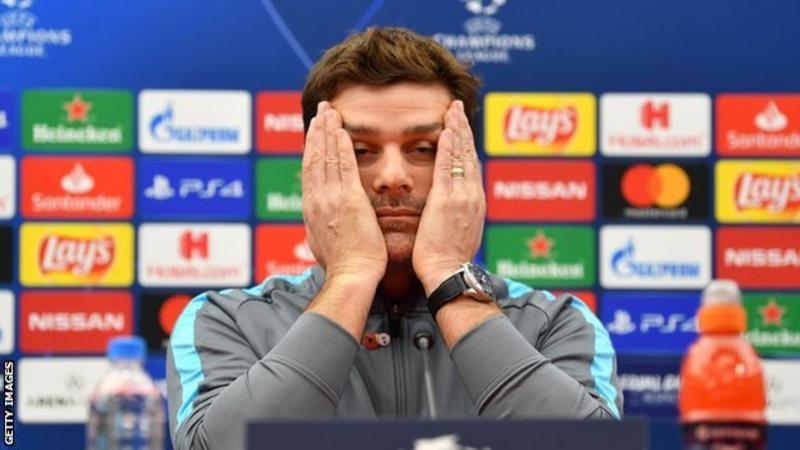 When Mauricio Pochettino took over as Tottenham manager in 2014, the club had managed only two top-four finishes in 22 Premier League seasons.

Under the Argentine they achieved that feat in four of his five seasons in charge and reached a Champions League final, the first in the club’s history.

Yet for all his success in that time – his tally of 382 Premier League points ranks behind only Manchester City (446), Liverpool (404) and Chelsea (398) – he has paid the price for a poor start to this season and been sacked with Spurs 14th in the Premier League.

He will go down as one of the great Tottenham managers, but have his recent struggles tarnished his legacy? We take a look at the numbers behind his five-year reign.

Guiding Tottenham to June’s Champions League final assured the Argentine of his place in Tottenham history, becoming only the third man to lead the club out in any major European final.

But it is his consistent record over the course of his five years in charge which means he bears comparison with their finest managers.

He has taken charge of 293 games in all competitions, making him fourth in the club’s all-time list. Only Bill Nicholson (832), Peter McWilliam (505), and Keith Burkinshaw (431) have been in charge for longer. And only the legendary Nicholson (55) has led them in more European games than Pochettino (53).

The 47-year-old has taken charge of more Premier League matches than any other Spurs manager (202) and, before this season, boasted the best points-per-game ratio of any Tottenham boss in Premier League history.

However, after a poor start to this campaign, the Argentine (1.89) has dropped to second behind his predecessor Tim Sherwood (1.91), though Sherwood managed only around a tenth of the games Pochettino did.

Struggles against the other big clubs

While his status as a Tottenham great is assured, his rank among Premier League managers is more debatable.

For all the improvements he has overseen at Tottenham, including the development of young players like Harry Kane and Dele Alli, there is no escaping the fact he failed to win a trophy during his time at the club.

In fact, he is yet to win any trophy as a manager.

And yet the statistics show that Pochettino reached 100 Premier League wins as Spurs manager in just 169 games – only Jose Mourinho with Chelsea (142) and Sir Alex Ferguson with Manchester United (162) got to that landmark for a single team in fewer games.

While such a record suggests he deserves to be rated among the league’s finest managers, it is in the big matches that Tottenham have frequently come up short under Pochettino.

During his time at the club, only Arsenal (51) have picked up fewer points against fellow “big-six” teams than Tottenham (60). And since August 2014, Spurs have lost more Premier League games against those sides than any of those other teams (23).

While he masterminded the end of St Totteringham’s Day – Spurs finally finished above Arsenal in 2017 after 22 years of ending the season lower in the table than their rivals – Pochettino has also struggled in the north London derby.

In all competitions, he has won four of 13 matches against the Gunners (won four, drew six, lost three), with only one of those victories coming away from home – a 2-0 win in the League Cup quarter-final last season. 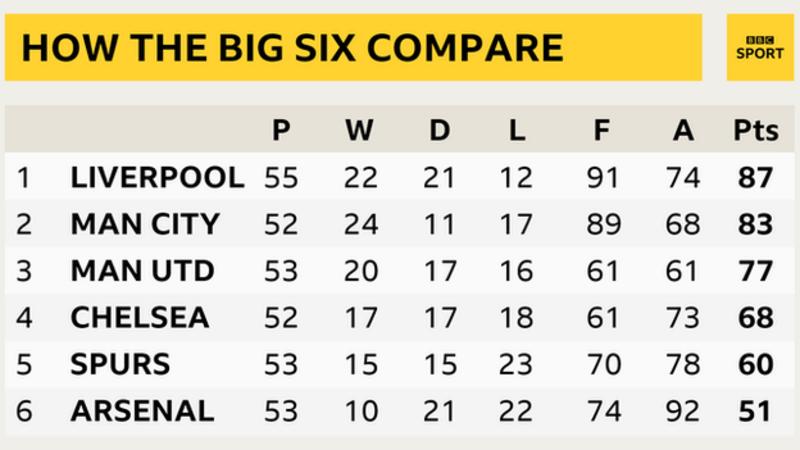 How it all unravelled

When Pochettino suggested before the Champions League final that winning that trophy might prompt him to leave the club, it caused some consternation.

And yet he might wish he had left whatever the result of that match, given how this season has unfolded.

It is not much of a stretch to suggest that their form during this calendar year has been that of relegation battlers. In fact, no Premier League side has lost more matches in all competitions than Pochettino’s side (18).

Spurs last lost more games in a calendar year in 2008, when they suffered 19 defeats during spells under Juande Ramos and Harry Redknapp.

At the heart of it all has been a dismal away record – their last away league win came in January when they scraped an injury-time victory against a Fulham side destined for relegation.

They have also lost more points from winning positions than any other Premier League side this season (12), bringing into question whether the players had the motivation to fight on their manager’s behalf.

And, for a club with Champions League aspirations and one now settled into a world-class stadium, it is perhaps this final statistic that sealed Pochettino’s fate. Tottenham’s tally of 14 points is their lowest after 12 games of a Premier League season in 11 years.