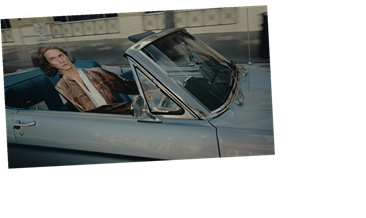 That's the premise of a new 60-second Super Bowl commercial unveiled by Doritos on Tuesday, in which a two-dimensional version of Matthew McConaughey floats and staggers through life before a Doritos product — Doritos 3D Crunch — helps him return to normal.

The comedic spot features "Flat Matthew," as he's called, struggling through a variety of everyday situations. He's flattened by a football, ignored at a coffee shop because he's standing sideways and blown away while walking his dog.

The commercial also features a scene with late-night talk show host Jimmy Kimmel, in which "Flat Matthew" joins Mindy Kaling at an appearance on Kimmel's show.

"Did you drive here? Or did you travel by fax?" Kimmel asks him.

The new spot is the latest in a series of comedic spots for Doritos, which is under the Frito-Lay umbrella. The brand finished fourth last year in USA TODAY's Ad Meter, which ranks commercials by consumer rating, with a spot that featured a western dance battle between Lil Nas X and longtime actor Sam Elliott.

RATE EVERY COMMERCIAL!: Become an Ad Meter panelist, vote on every ad and be entered to win a trip to the big game in 2022. See official rules for details.

"We pride ourselves on Doritos Super Bowl commercials bringing smiles to fans' faces each and every year," Frito-Lay North America senior vice president and chief marketing officer Rachel Ferdinando said in a news release. "And (we) are confident that this year's #FlatMatthew campaign will deliver once again."