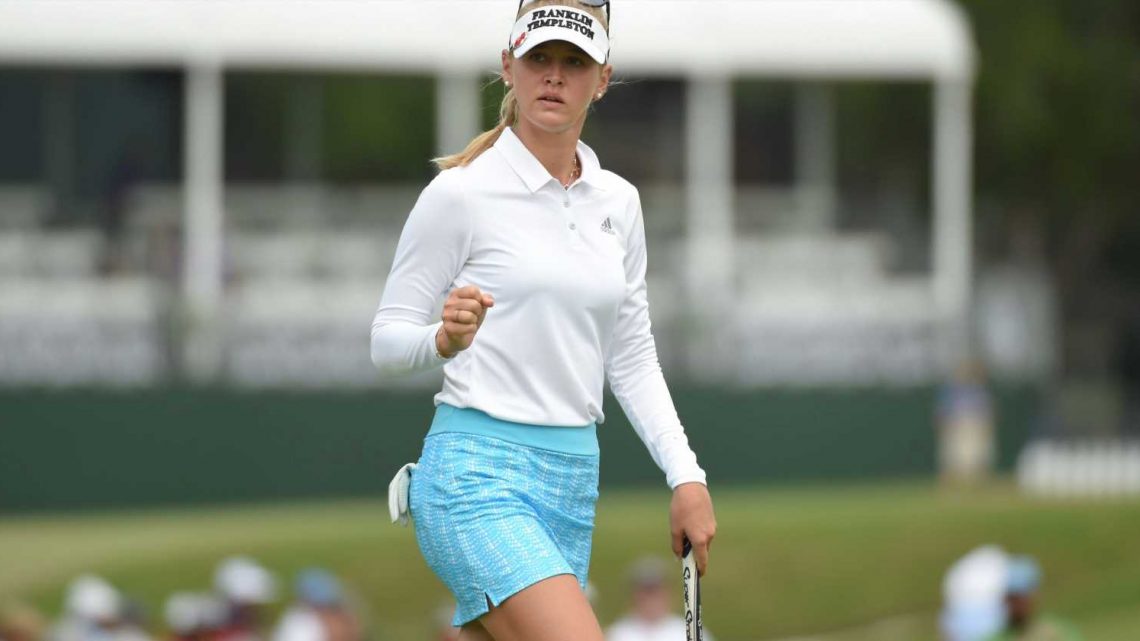 CHARLESTON, S.C. — Japan's Mamiko Higa felt genuinely scared on Friday afternoon, and it had nothing to do with contending in her U.S. Women's Open debut.

It was Mother Nature who dealt the most intimidating blow at the Country Club of Charleston. Shortly after play was suspended for dangerous conditions, lightning struck a grand old tree between the 18th and 11th holes. Those near the patio of the clubhouse could feel the electricity. A Fox camera caught the powerful strike, which split the tree down the middle.

No one was hurt, but USGA officials had the area around the tree, which was still standing, roped off after play resumed.

Course officials started taking down the tree after play finished. It was a 45-minute process.

Scary scene during the weather delay at the #USWomensOpen. Players and fans are safe, and play is about to resume. pic.twitter.com/wAW3ivGjKv

"We consulted with an arborist, our public safety officers, the city of Charleston, and club leadership, and determined that leaving the tree was a safety risk for our players, volunteers and spectators," said Julia Pine, senior manager women's championships communications.

"That was really scary," 25-year-old Higa said after the round. "And that was the first time I saw the lightning hit so close."

Higa, who is engaged to a famous sumo wrester in Japan, immediately birdied two holes after play resumed at 6:45 p.m. ET. She finished with an even-par 71 to take a one stroke lead over Jessica Korda at 6-under 136. Korda, 26, carded a bogey-free 3-under 68 hours before the bad weather rolled in.

This is scary stuff but I have heard that no one was hurt. This strike was just to the left of #11 green and shows that even God can’t hit the 11th green! # thankfuleveryoneisok https://t.co/FdyuJfqXGX

When play was suspended a second time due to darkness, Korda's younger sister Nelly was three shots back at 3 under alongside Lexi Thompson. Nelly has three holes left to complete while Thompson has two.

Amateur Gina Kim sits in a share of third with Celine Boutier at 4 under. Kim, who just last week helped Duke win its seventh NCAA title, matched the second-lowest 36-hole record for an amateur at this championship at 138. Grace Park shot 137 in 1999. Hye Jin Choi also carded a 138 at the 2017 Women's Open at Trump National.

TIGER WOODS: Hank Haney deserved to be suspended from SiriusXM

"I didn't make more mistakes than yesterday," said Kim, who followed a magical 66 with a 72. "If anything, I think I improved and learned this golf course a little better."

Round 2 will resume at 7:15 a.m. Forty-five players have yet to complete the second round. Jessica Korda, one of the best players on tour without a major, will be well-rested by the time she's set to start Saturday's play.

Here’s the tree that got hit by lightning. pic.twitter.com/jeuSK5qNH9

With little sister Nelly on her heels in Charleston and above her in the Rolex Rankings (Nelly is 11th; Jessica is 13th), Jessica was asked if there was ever any trash talk between them.

"No, it's literally all support," said Jessica. "I think everybody is so disappointed because they think we trash talk each other, or they think there's side bets. We just have the one yearly one. Other than that, we're trying to be supportive. We know how hard it is out here. If we see the other ones down, you always try and lift the other one up."

Nelly won the year-long bet in 2018, which meant Jessica had to buy her a Louis Vuitton duffel bag.