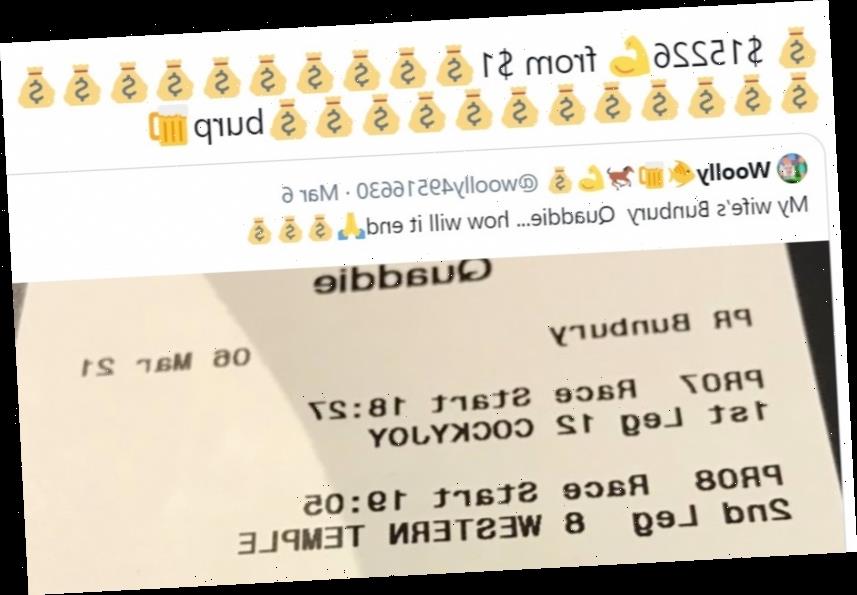 The woman, known only as Mel, employed what her husband Woolly called a 'dart board' approach to her selections. 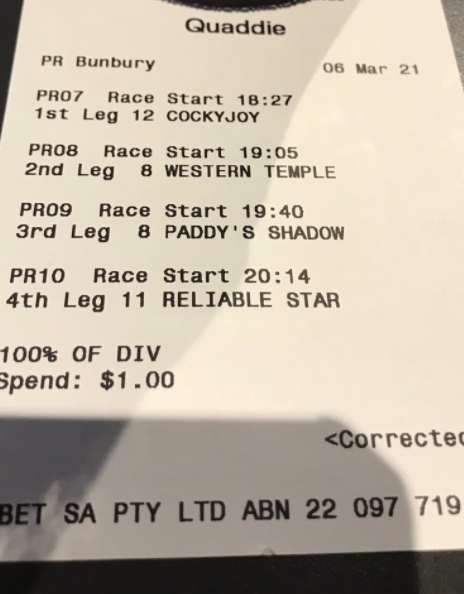 Woolly said his wife only ever does tiny each way bets.

Paddy Power: New Customer Offer. Place a £5 single racing bet, min odds 1/5 (1.2) and get £20 in free bets. You will also get an additional £5 in free bets for each day of the Cheltenham festival (£40 in total). Only deposits made using cards or Apple Pay will qualify for this promotion. Free bets will be awarded after the qualifying bet has been settled and are valid for 30 days. T&Cs apply. Paddy's Rewards Club: Get a £10 free bet when you place 5x bets of £10+. T&Cs apply. 18+ Begambleaware.org

But she hit the big time after landing a four-fold accumulator at monster odds that went to around 15,250-1.

Mel did what is known in Australia as a 'quaddie' – basically picking four selections.

Often these bets see punters select two to three horses per race, regularly taking on the favourite in hope of an upset.

But Mel stuck with just one horse in each race and watched as they all came in.

Woolly even tempted fate by posting the winning slip to Twitter ahead of the final contest.

But there was to be no jinx as Reliable Star – around a 4-1 shot – won by half a length in a race at Bunbury Turf Club near Perth, Australia.

Asked whether his wife's work was genius or fluke, Woolly told Punters: "To be honest, it was a dart board job. She's only a $1 each way punter.

"We didn't think much of it until the third leg got up, then the nerves kicked in."

The bet was placed in a pub, which was near enough empty by the time Mel's final selection won.

Woolly said: "There was only six of us there for the last race. Most punters got stung during the day and had p***ed off home."

So how did they celebrate?

He added: "We didn't really do anything out of the ordinary.

"Mel doesn't drink much and I had work, so just a nice little bottle of red with dinner."

Amazingly, Mel's big winner came on the same day a William Hill punter this side of the world landed a £205,000 jackpot.

But they would have been toasting a £1.7million payout had Tommy's Oscar won. He was the only loss in their eight-fold goliath.

Still, neither can match the man believed to be the world's biggest racing punter, who's worth £333m and known as 'The Joker'.

When is Cheltenham Festival 2021? Dates, race schedule, Gold Cup runners, TV channel and will fans be in attendance?

0.4% of population in Essex wiped out by Covid, shocking data shows
World News