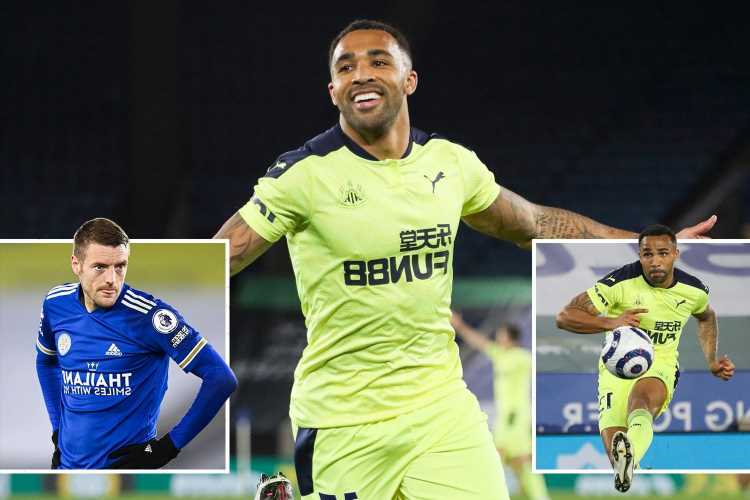 How Brendan Rodgers must wish the fat lady could sing now to bring the curtain down on a successful end to this season. 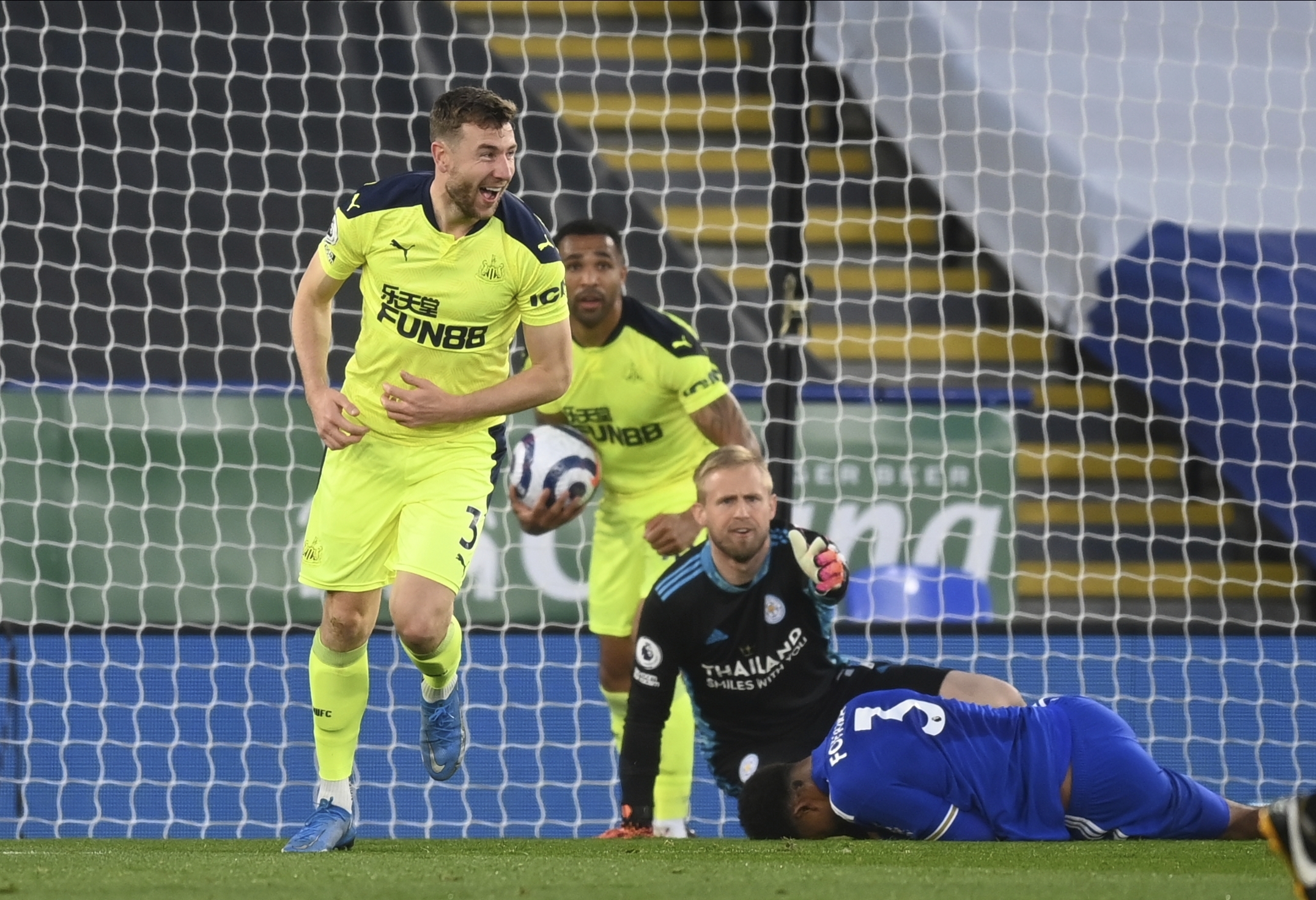 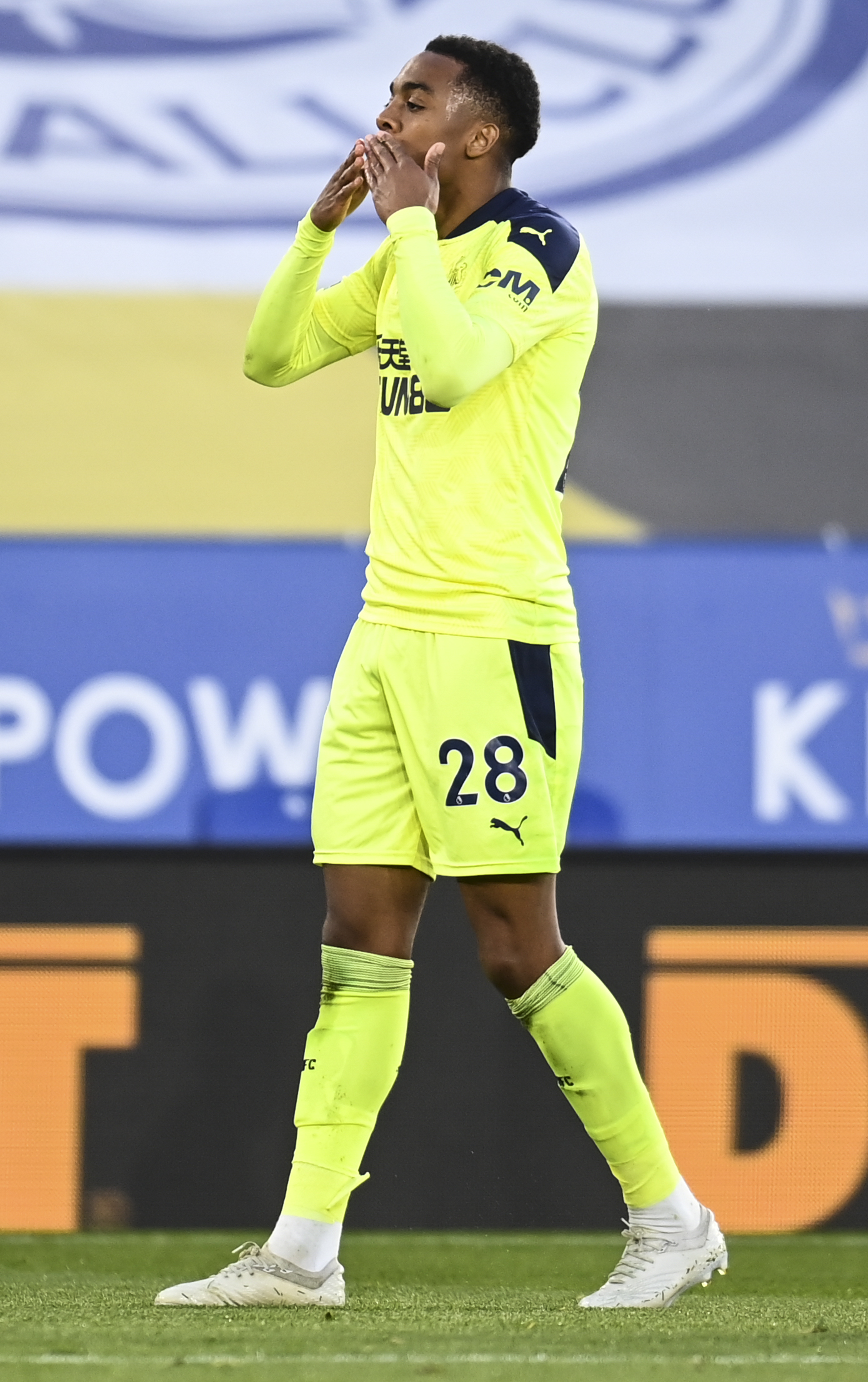 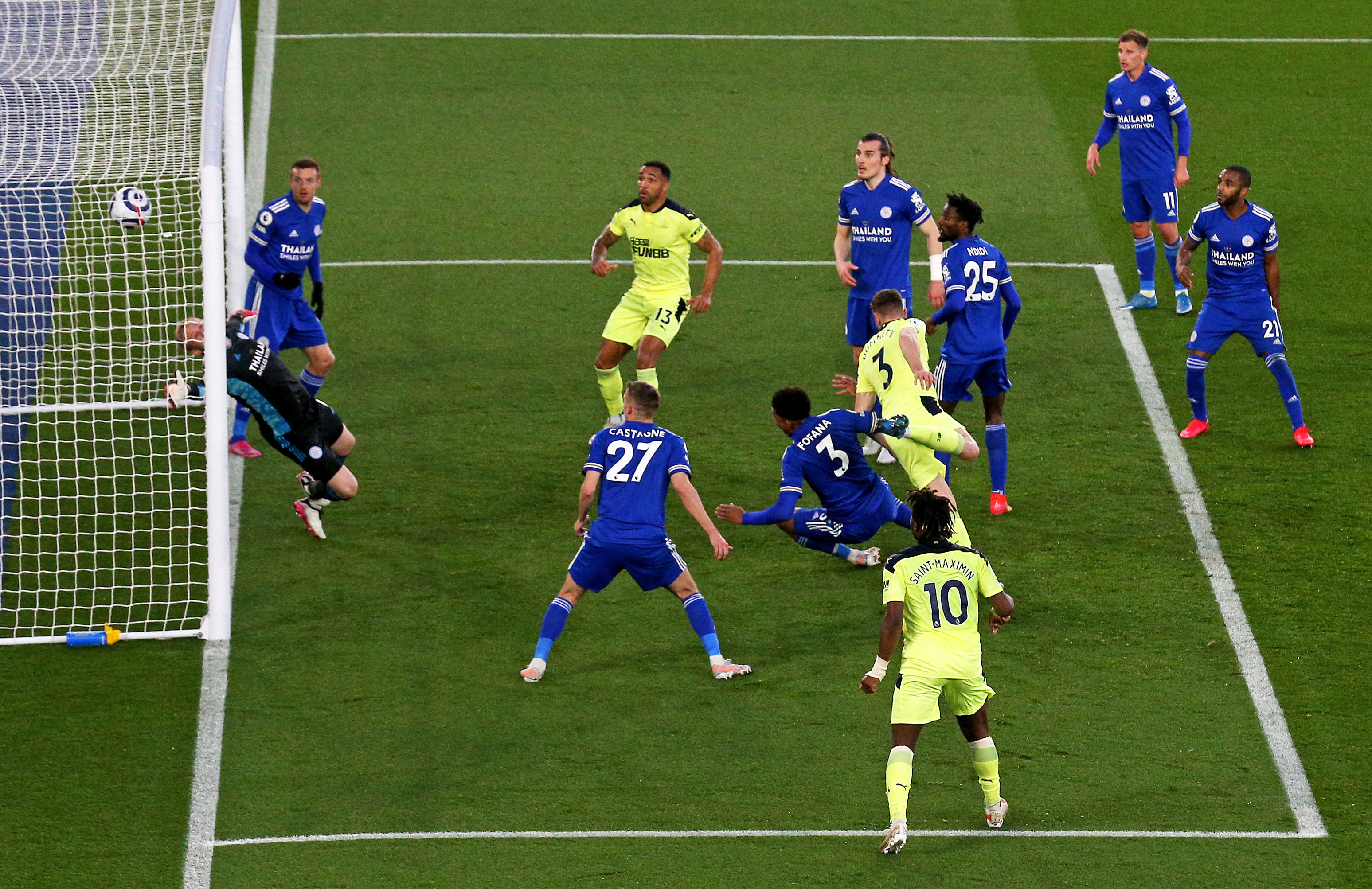 While the Magpies celebrated their convincing win, Leicester were left to look at a daunting run-in which includes trips to Old Trafford and Stamford Bridge before a tense end of season clash at home to Spurs.

Right now they look more likely to repeat last season's implosion, than rekindle the spirit of their 2016 title triumph.

The Foxes suffered a devastating blow 10 minutes before kick off when their defensive rock Jonny Evans hobbled out of contention.

The Northern Ireland international broke down late in his pre-match warm-up with a recurrence of a troublesome heel injury and had to be replaced by Marc Albrighton.

Without him they crumbled.

This was no time for the home side to feel sorry for themselves but Newcastle could smell the fear and the Magpies ran amok.

They should have taken the lead after 16 minutes when Jacob Murphy exposed Caglar Soyuncu with a through ball to Callum Wilson who squared to Allan Saint-Maximin in front of goal.

Somehow Schmeichel managed to thrust out his left boot to deflect the ball wide with a save reminiscent of his dad Peter at the peak of his powers.

However the Dane was up against it with his defence all at sea and Newcastle finally cashed in midway through the half.

There seemed no danger when Paul Dummett's long ball from defence landed at Soyuncu's feet but the Turkish defender's attempt at a Cruyff turn was a disaster.

Joe Willock pounced to rob him and showed Saint-Maximin how it should be done by expertly beating Schmeichel to notch his fourth goal in four appearances. 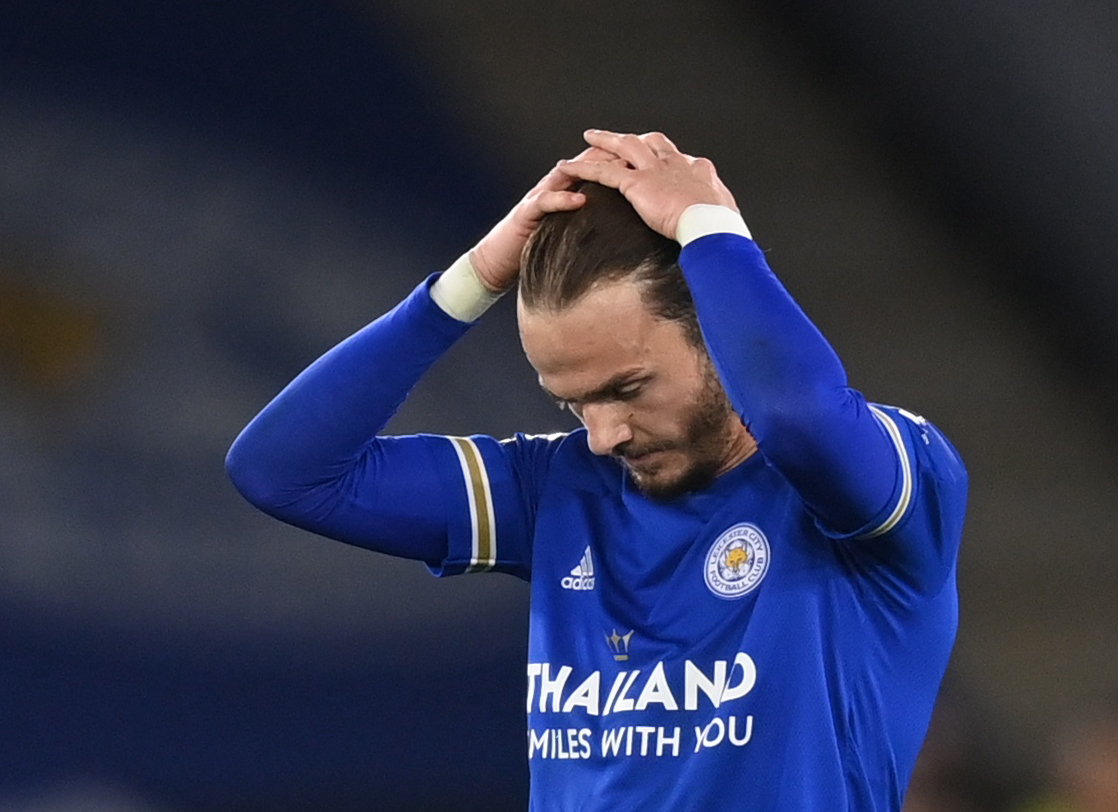 With Leicester owner Top Srivvadhanaprabha attending his first game in more than a year Leicester tried to respond but Martin Dubravka beat away Wesley Fofana's header.

Instead it was Newcastle who increased their lead after 34 minutes when Dummett soared above Fofana to power home a header which Schmeichel could only help into the roof of his net.

Jamie Vardy came close on the stroke of half-time with an attempted lob which Dubravka kept out at full stretch.

But any hopes of a second-half recovery collapsed as Wilson took centre stage to score a double.

Just after the hour the striker cashed in on Leicester's square defence as Timothy Castagne came up short with an attempted passback.

Wilson kept cool to round Schmeichel and calmly finish.

Nine minutes later he was at it again, nipping in front of Fofana to hit the far post, before gobbling up the rebound. 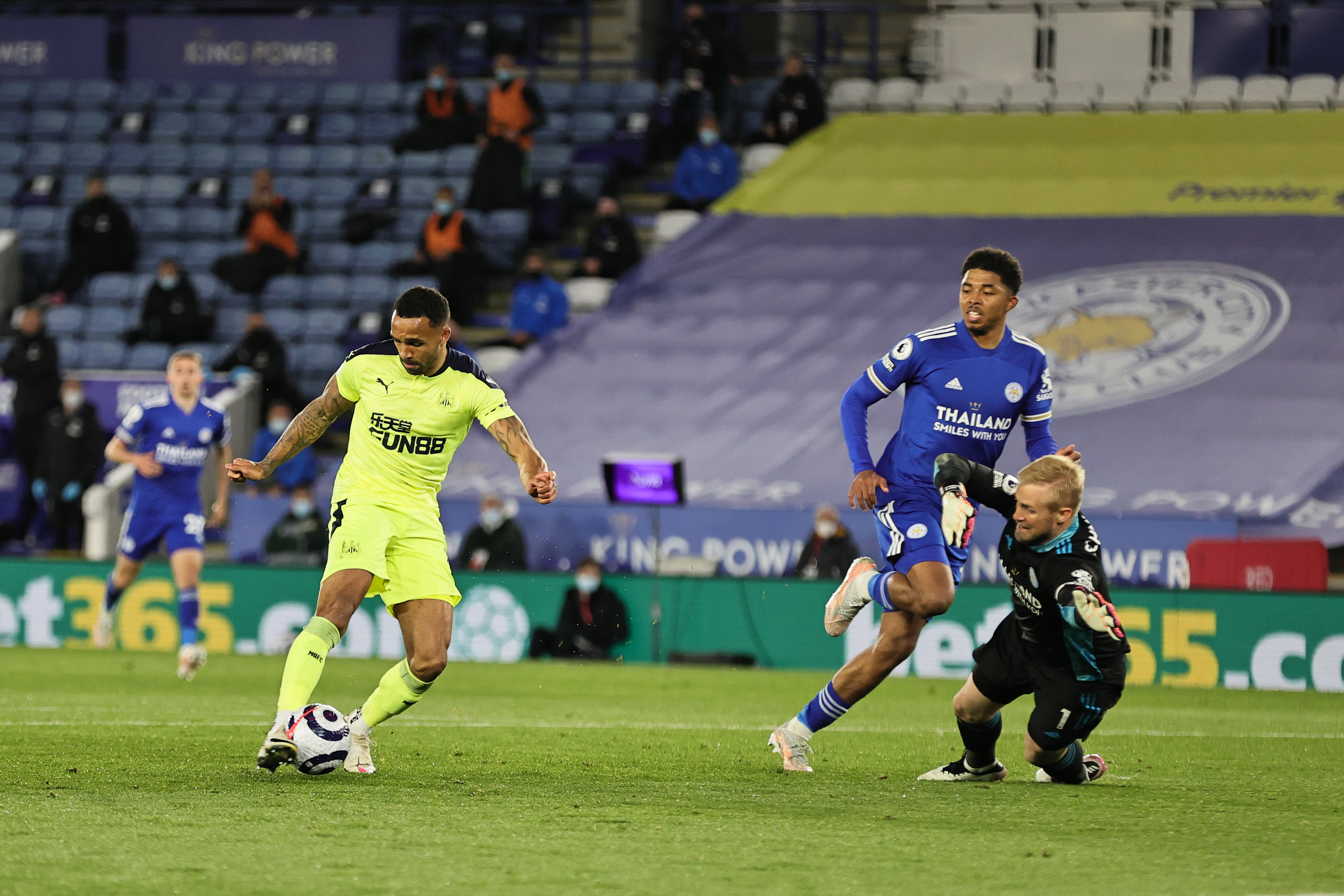 Four-nil up, the Magpies were in dreamland.

But to their credit the Foxes fought back valiantly.

Albrighton grabbed an unexpected lifeline when he smashed a Vardy pass high beyond Dubravka.

And incredibly the Foxes halved the deficit when sub Ayoze Perez fed Kelechi Iheanacho who cut inside Dummett to smash the ball past Dubravka at his near post for his now-customary goal.

Leicester had long since thrown caution to the wind and it took a stunning block from Dubravka to deny Perez a rapid third.

But a night that started badly with Evans' injury was never going to have a happy ending – unless you were a Geordie!