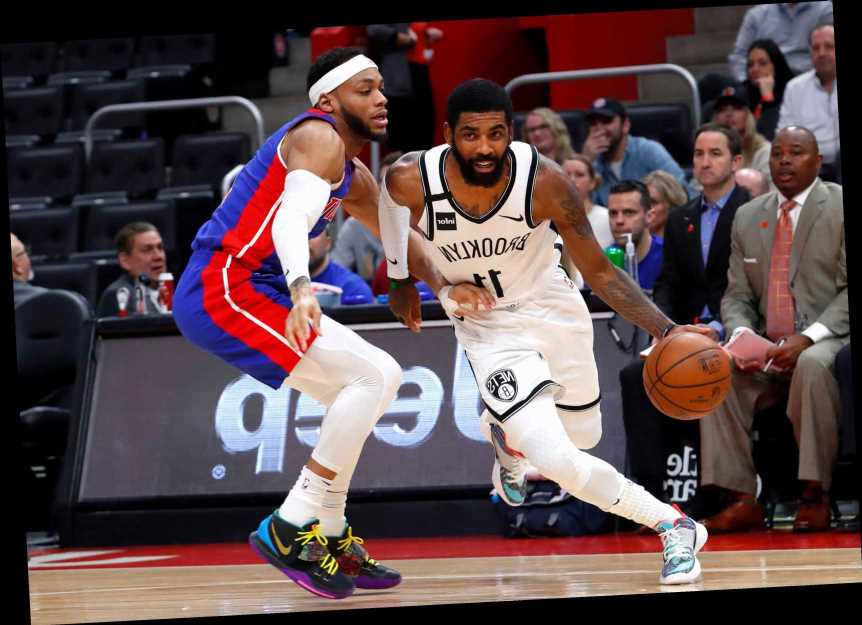 Kyrie Irving pours in 45 as Nets clip Pistons in OT

DETROIT — The Nets desperately needed to win Saturday’s game against the Pistons. And Kyrie Irving went did what a star should — he delivered the victory.

The Nets saved their campaign last year with a dramatic, midseason turnaround, and over the next two weeks, they will have their best chance for an encore. Perhaps it started — thanks to Irving — with their 121-111 overtime win over the Pistons at Little Caesars Arena.

The star guard had a game-high 45 points, including 33 after the Nets had trailed by 10 at halftime. It’s his highest-scoring outing since dropping 50 in the season opener. But they lost that game to the Timberwolves at Barclays Center. This time, they got a must-have, slump-busting, road victory.

The Nets (19-25) snapped a five-game losing skid, all of those defeats against the NBA’s best teams. Saturday’s game and Sunday’s against the Knicks at the Garden tip off a seven-game stretch against losing teams — and a chance to make up ground.

“Yeah, we’ve got to make up some ground, I think there’s no doubt about it,” Nets coach Kenny Atkinson said. “It’s a good time. I think we’re getting healthier, I think that helps. The schedule lightens up a little, although there’s no easy games, as we all know.

The Nets had lost 12 of their past 14 games, but rallied after trailing by as many as 13, including 96-91 late in the fourth quarter. Jarrett Allen had 20 points and 15 boards, while Joe Harris added 16 to help the Nets extend their lead over Detroit to 3 ½ games for the eighth seed in the Eastern Conference playoffs.

The Pistons (17-30) — playing without star forward Blake Griffin and on the second night of a back-to-back — got outscored 15-5 in overtime.

Irving personally outscored Detroit 12-4 to open the second half and had 17 points in the third quarter alone.

The Nets outscored the Pistons 35-24 in the period — their best third-quarter margin since the season opener — to lead 80-77 going into the fourth. But their recent history there is shady at best.

The Nets allowed a 13-3 run to open the period, a fadeaway jumper by Mykhailiuk leaving them behind 90-83 with 9:05 to play.

Irving’s free throws put the Nets on the board first in overtime, and they forced a Rose miss.

Spencer Dinwiddie got free for a layup, and a Markieff Morris offensive foul left the Nets up 110-106 with the ball. And two more free throws by Irving made it six with 2:57 left.

A Harris dagger 3 made it 115-108, and Irving found Jarrett Allen for an emphatic alley-oop for a nine-point cushion. The clock read 2:01 in overtime, but it was over.

The Nets went winless in a nasty stretch against the Jazz, the NBA-leading Bucks, the West-leading Lakers and the 76ers (twice). As of Saturday, that quintet was a combined 165-65.

After this back-to-back, the Nets host the Pistons on Wednesday and the Bulls on Friday. They then play at Washington on Saturday, before home games against the Suns (Feb. 3) and the Warriors (Feb. 5). That seven-game run comes against foes that were a combined 107-214 entering Saturday.

The Nets have gone from deep trouble to high cotton, and they have to make up ground. This was a start.

‘RHOC’ Vicki Gunvalson: The Truth Behind Her Departure After 14 Seasons
World News