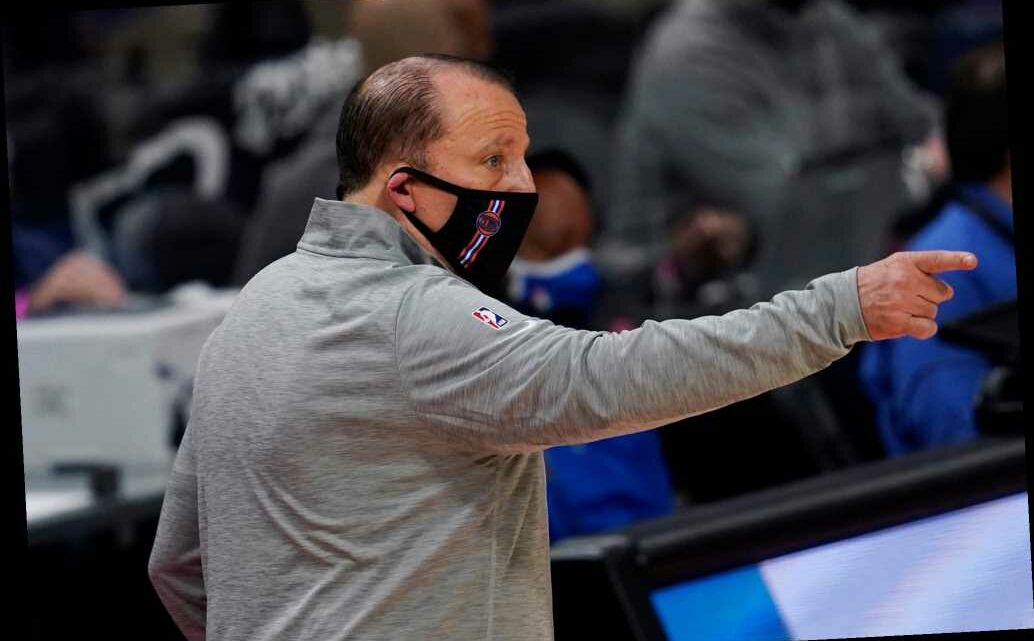 Knicks season preview: Can Tom Thibodeau pull this off?

The Knicks have the worst NBA record this century at 693-997 (.410). It has always been about the cap space of the future — never about the ugly present.

The arrival of Tom Thibodeau changes that mindset. Thibodeau wants to win. Now.

And the Knicks’ new head coach has instilled that philosophy in the locker room, regardless of doomsday predictions about another lottery berth and an eighth straight season out of the playoffs.

There isn’t a star on their roster after president Leon Rose’s sleepy approach to free agency, but as one coaching friend said of Thibodeau, “He’ll still try to thread the needle.’’

The Knicks hope they won’t be known for just being a haven for average Kentucky players.

“I’m trying to make the playoffs and trying to win,’’ second-year guard RJ Barrett said. “We shouldn’t expect anything less from ourselves. We got a lot of talented players and hard workers. If we put it together with the coaching staff we have, we should be able to do very well.’’

Suddenly, that summer free agency of 2021 doesn’t look so dazzling for the Knicks. Many prospective free-agent studs are already off the market — including the top gem, Giannis Antetokounmpo.

Suddenly, the present seems that much more vital. Thibodeau’s Knicks will attempt to cultivate their young prospects, perhaps turning them into valuable trade chips for a superstar.

Or just maybe they will attempt to win games with defense and sneak into the pandemic playoffs that will include 10 teams per conference.

To that end, the preseason didn’t go badly for Thibodeau’s team, which posted a 3-1 record with stout defense that held opponents to an average of 89 points per game. Yes, it came against NBA bottom-feeders, the Pistons and the Cavaliers, but let this maligned franchise savor something.

Prospects Barrett, Kevin Knox and Mitchell Robinson showed significant improvement. And the Knicks’ other rookie draft pick, Immanuel Quickley, who was taken 25th (17 spots after No. 8-overall Obi Toppin), displayed glimmers of being the point guard of the future — and present.

“He’s got game,’’ one NBA scout said. “He does all the right stuff for who he is, what he is and how he should go about getting it done. A terrific approach.’’

The coaching staff’s goal for the offense in training camp, according to sources, was basic. Thibodeau’s film study of last season’s games showed that players such as Knox, Barrett, Julius Randle and Dennis Smith Jr. struggled in figuring out when to shoot and pass. Fundamental stuff.

In preseason, the ball movement was crisper. Signs their dreadful 3-point shooting will get better also came in the preseason finale. If Thibodeau is the club’s major upgrade, so be it.

“It’s follow Thibs’ lead — he knows what he’s doing,’’ Barrett said. “A very competitive coach. I could tell that right away.”

How will Thibodeau hash out his point-guard rotation after a topsy-turvy preseason?

The point-guard derby didn’t go as planned. Longshot rookie Quickley was left standing as arguably the top choice after his startlingly electric final two games. Now Thibodeau has a giant decision on whether he can go with the 6-foot-3 combo guard in the opener over veteran Elfrid Payton, who looked decent, but far from magical, in the preseason opener. Payton hasn’t improved his perimeter shot one iota. New signee Austin Rivers, the team’s oldest player at 28, missed all of preseason with a pulled groin, so his time won’t come for a while. Smith, surprisingly, looked stouter on defense than offense. He still doesn’t run the show, though. And injury-prone Frank Ntilikina is being viewed as an off-the-ball guard. A Payton-Quickley tandem will probably be it for political purposes — with the dynamic Kentucky youngster finishing games.

How much will Obi Toppin play with Julius Randle’s emerging presence?

Slow the Toppin-hype “A” train. Playing Toppin and Randle together at the 4-5 is not going to work defensively, so the Knicks’ lottery-pick power forward will get minutes based on Randle’s effectiveness. Quietly, Randle looked solid in preseason, at times taking over as a point forward to push the pace. Moving the ball with more ease, Randle dished out 5.5 assists and averaged 14.5 points. After a terrific first half in the preseason opener in Detroit, Toppin faded as clubs made adjustments. His 3-point shot was errant and he didn’t create his own shot off the dribble. Toppin still must figure it out. He’s got loads of potential with that athleticism and looks like a genuine team guy. One scout said he should just concentrate on defense and getting transition hoops for now.

Was that Thibodeau preseason defense for real?

Already the Knicks are a more disciplined defensive unit, though guarding the 3-point line — a longtime Achilles’ heel — is still far from perfect. They didn’t give up a 100 points in any of the four games. They looked to be a stout defensive-rebounding club with solid rim protection. Allowing easy driving layups and fastbreak hoops could be a thing of the past. They were disciplined and rotated well enough. That’s where Thibodeau figured to make the biggest impact.

Is Frank Ntilikina’s Knicks future coming to a close?

With Monday’s rookie contract deadline passing without picking up his option, the French guard will be a restricted free agent in 2021, so he’s likely to be shipped at March’s trade deadline unless he emerges in the coming months. His Knicks career has been hampered by assorted leg injuries, and this preseason was no different. He missed the final two games with Achilles tendon soreness. With the glut at point guard and the organization wanting to give Smith a big look, Ntilikina was something of an afterthought in the two games he played, mostly off the ball. The 2017 lottery pick averaged 17 minutes and only took eight shots (37 percent). Finding big minutes at shooting guard could be difficult with veterans Reggie Bullock and Alec Burks vying for time, too. Both are better 3-point shooters. And that’s not to mention Rivers, a combo guard, when he’s healthy.

What will it take for Barrett to emerge as a potential All-Star?

The 2019 No. 3 pick still can’t come close to draining 3-point shots, but the 6-7 shooting guard from Duke is doing almost everything else better. If the Knicks ever get good, the 20-year-old has a legitimate chance at one day being in the All-Star conversation. His lack of rookie efficiency cost him a nod on the two All-Rookie teams, but the significant improvement is acing his free throws at 86.7 percent in the preseason — up from 61.4 percent last season. That’s critical because he will draw a lot of fouls as he rumbles to the hole with agility and smart basketball moves. His preseason shooting percentage is 50.9 percent — based on lovely finishes around the rim. The 3-point shot? Well, you can’t have everything. He’s 2-for-16 yet still averaged 17 points.

Newcomer to watch: The GMs have pegged Obi Toppin, selected eighth, with having the third-best chance of winning Rookie of the Year. But not having summer league probably hurt Toppin after playing at mid-major Dayton. Tom Thibodeau needs to find a way to get him more involved offensively. His athleticism is off the charts, he’s a good rebounder and terrific finisher.

Most important decision: There are too many to count. It’s a convoluted roster without any clear starters outside of Julius Randle and RJ Barrett. The coach has to decide on either Mitchell Robinson or Nerlens Noel at center, a starting point guard and a starting small forward, with Alec Burks and Reggie Bullock probably getting the early nod over Knox. Reuniting with assistant Johnnie Bryant, Burks is the favorite as the coaching staff has fallen for him because of the varied ways he scores.

Good days to come: Speaking of Knox. After the first 2 ¹/₂ preseason games, Knox looked lost. His perimeter shot was shaky and his defense had the same low energy. Starting in the fourth quarter against Cleveland on Wednesday, Knox closed out the preseason by making eight of his last nine 3-pointers across five quarters. That’s a game-changer.

Bad days ahead: Ignas Brazdeikis finally got into a contest Friday during garbage time and looked alert in moving the ball. But the 2019 second-rounder was mostly ignored and may have to do his thing in the G-League bubble if he makes the team.

Story that won’t go away: The Knicks were left with $18 million in cap space after free agency, setting them up for a blockbuster trade because of their ability to slip in a large contract. They’ll see Indiana’s Victor Oladipo first on Wednesday. Randle could wind up as a key piece, especially if he grows this season.

Don’t be surprised if: Immanuel Quickley, selected 25th, becomes the most impactful rookie on the roster, over Toppin.

What to Watch on TV This Week: ‘Wonder Woman 1984’ and ‘Bridgerton’