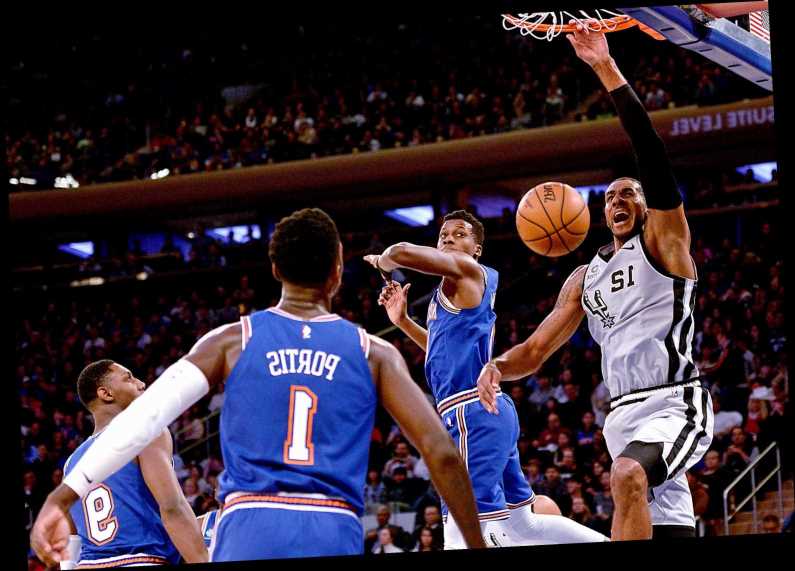 What does the Spurs’ worst team in 23 years look like? Desirable.

Arriving at Madison Square Garden with the longest losing streak of Gregg Popovich’s Hall of Fame career, San Antonio found predictable relief against the NBA’s worst team of the past two decades, snapping their eight-game losing streak with Saturday night’s 111-104 win over the Knicks.

Fizdale’s first year ended with the Knicks matching the worst mark in team history. His second season features 14 players with a combined zero All-Star appearances, dragging the Knicks (4-12) back to the bottom of the Eastern Conference and toward their seventh straight season without a playoff berth.

“They’re the Spurs. I can never let up my guard,” Fizdale said. “We do not have the luxury as a team to look at anyone but with utter respect. For what they’ve done throughout their history … you have to really respect this team.

“They’re a wounded animal right now. … At some point, they will get it going again.”

Less than two hours after Popovich labeled his team “defensively challenged” — “A political sort of term for we suck,” the coach explained after allowing an average of over 122 points during the losing streak — the Knicks were limited to 16 points in the first quarter.

San Antonio scored the game’s first seven points, and sprinted to a 23-9 lead less than eight minutes in. As the deficit grew, the arena organist struggled to convince the crowd to chime in with “De-fense” chants. The Knicks didn’t bother. Why would they?

The Spurs shot 60 percent from the field. Marco Belinelli and Jakob Poeltl surpassed their respective scoring averages before the first round of boos closed the first quarter. The Knicks had four turnovers, three assists, one offensive rebound and two attempted free throws, putting them in a 16-point hole to open the second quarter.

Though Bobby Portis (16 points, 4-of-6 3-pointers) shot well off the bench, his teammates largely struggled to string two good shots together. The Knicks hit 33 percent from the field in the first quarter. They opened 4-of-16 beyond the perimeter. The boos returned. They always returned. They always return. A “sell the team” chant emerged. Halftime hit, and the Knicks trailed 68-43.

The second half started with a Spurs uncontested layup, bringing the lead to 27. The gap remained above 20 until Dennis Smith Jr. scored seven straight points midway through the quarter. Wayne Ellington chipped in with 13 points. Portis found Mitchell Robinson for a dunk, sparking inspired “De-fense” chants and fist pumps from Fizdale.

Frank Ntilikina (nine points, seven assists, six steals) kicked off the fourth quarter with a steal and dunk, but the Knicks’ momentum never lasted long enough. When the Spurs committed a turnover, the Knicks gave it right back. When Ellington hit from deep, Patty Mills responded by making his fifth straight 3-pointer. When Ntilikina cut the deficit to 12 on a 3 with just over six minutes remaining, DeRozan drilled an open jumper.

When Marcus Morris delivered a 4-point play with 3:57 left, the deficit hit single-digits for the first time since the first quarter. RJ Barrett brought the lead down to seven. Several opportunities arose to slice it even more. The Knicks were unsuccessful.