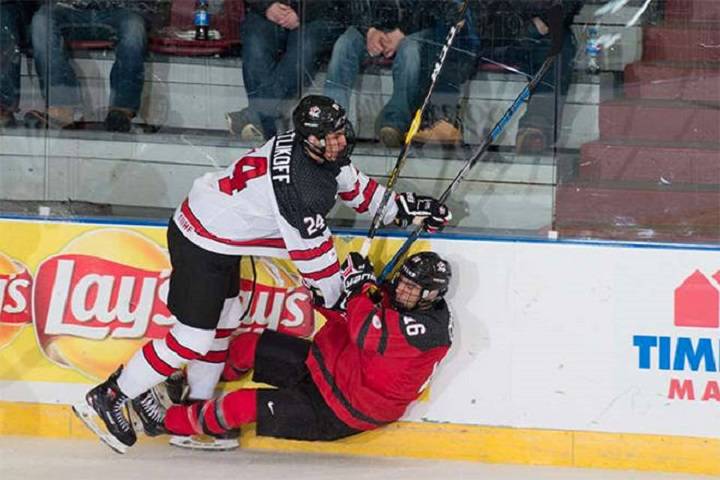 The offer was put forward two weeks ago. On Tuesday, Alex Swetlikoff became the newest member of the Kelowna Rockets.

The Rockets announced this afternoon that they had signed Swetlikoff, a forward, to a standard WHL player agreement. The news came 11 days after Kelowna acquired his WHL rights from the Lethbridge Hurricanes. In making the deal with Lethbridge, Kelowna gave up a fourth-round pick in the WHL’s 2022 bantam draft.

Prior to Tuesday afternoon, Swetlikoff, 17, was a member of the BCHL’s Vernon Vipers. The 6-foot-3, left-handed shot had tallied 8 goals and 12 assists for 20 points in 27 games this season, his second BCHL campaign. Last season, as a rookie, Swetlikoff had 3 goals and 15 points in 51 regular-season games.

“We’re very excited to have him join the Rockets,” said Rockets president and general manager Bruce Hamilton. “I know it’s always difficult to leave another team. However, I think that Alex understands that if he wants to get to the next level, the best move for him is to come to the Western Hockey League to achieve those goals. We’re looking forward to helping him become a better player and get him in a position to be drafted this June.”

“I’m super excited to join the Rockets,” said Swetlikoff. “I grew up watching them play, it’s a privilege to join the organization. I can’t wait to hit the ice with them.”

Swetlikoff was originally drafted 62nd overall in the third round of the WHL’s 2016 bantam draft by the Seattle Thunderbirds.

The NHL’s Central Scouting Service has listed Swetlikoff as a C prospect on its players-to-watch list. That will likely translate into being selected in the fourth round or later at the NHL’s 2019 draft this June in Vancouver.

Notably, earlier Tuesday, the Canadian Junior Hockey League released its rosters for next month’s CJHL Prospects Game. Swetlikoff was one of four BCHL players from the Okanagan who were slated to participate. The other three were defencemen Jack Judson of the Vipers and Mason Snell of the Penticton Vees plus forward Massimo Rizzo of the Vees.

However, having signed a WHL player agreement, Swetlikoff will no longer be eligible to play in that game. Swetlikoff was tied for fifth in team scoring in Vernon, six points behind leader Teddy Wooding (11 goals, 26 points in 35 games).

Swetlikoff also recently suited up for Canada West at the World Junior A Challenge in Bonnyville, Alta., where he helped the team win bronze. It was his second time representing Canada; he also played for Canada White last season at the World Under 17 Hockey Challenge.

More proof the deep state’s hypocrisy is alive and well