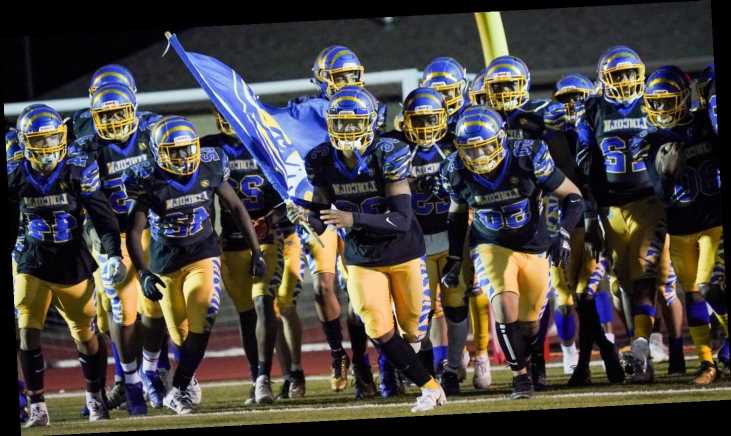 In the heart of Kansas City, Missouri, there's a high school football team that has experienced a lifetime worth of tragedy and triumph. From players losing family members to gun violence in one of the country's most dangerous zip codes to a tragic car accident to the team featuring four Division I football commits.

Lincoln College Preparatory Academy's story, the on-the-field success along with its off-the-field drama, has even drawn the interest of a documentary filmmaker. Think "Friday Night Lights" meets "Last Chance U."

It wasn't long ago that the Blue Tigers were barely able to muster enough players to fill a roster. But after finishing last season 11-1, coach William Lowe is out to prove his team is more than compelling reality TV.

"We know we're a legitimate program," Lowe told USA TODAY Sports. "We're not just some feel-good story about some city kids that have had a couple of seasons of good football."

Lowe arrived at Lincoln in 2015 as an offensive assistant and was promoted to head coach in 2017. He had his work cut out for him.

"I think for my first practice a kid showed up with no shirt and jeans on," Lowe said. "The kids weren't used to a good program because expectations were never set for them."

That quickly changed. To start, if you didn't practice, you didn't play on Fridays, and by the end of the season Lincoln's roster shrunk to 32 players, according to Lowe.

Such success is uncommon for an inner-city team because players are often recruited to suburban high schools where more Division I scouts are looking for players. It's especially uncommon for a school such as Lincoln, which is known more for its academics than athletics.

Students need test scores at the 60th percentile in math and reading on a nationally noted test to get into Lincoln as well as maintain a 2.5 GPA and 90% attendance, according to Kristian Foster, the school's principal. Lincoln, a historically Black school, wasn't desegregated until 1978 and is now seeing its athletics keep pace with its storied academics.

Lincoln linebacker Jermaine Hamilton-Jordan was quick to credit the school's well-rounded success, and says the classrooms are filled with more than just students and teachers.

"It's a family inside that building," Hamilton-Jordan said.

Outside of that building, however, is a one of America's most dangerous cities.

Not for the faint of heart

Kansas City had one of the country's highest homicide rates in 2019, at nearly 30 per 100,000 people. Overall there were 148 homicides. The new year has seen more of the same, with the city already eclipsing its record for homicides in a year after reaching 156 in October, according to the Kansas City Star.

"You got to watch your head when you go out," Hamilton-Jordan said.

Hamilton-Jordan, who has committed to Arkansas, is one of the four players on Lincoln's roster who are committed to Division I programs. Quarterback Howard Brown is going to Iowa State as a defensive tackle, Marcus Bass is heading to Army and Tobechi Okoli is committed to Auburn.

Like many of their teammates, these players have had to deal with turmoil as a result of gun violence.

Brown and Hamilton-Jordan said they have both had multiple family members fatally shot, and talk about the dangers of growing up east of Troost Avenue, notoriously one of the most dangerous areas of Kansas City.

Bass said he was fortunate to not have suffered from any type of gun violence but said it's a part of his everyday life. He suspects the summers are more dangerous because in the winter he hears less gunshots.

"I always grew up with that type of stuff, I didn't really see it as out of the ordinary," Bass said.

The consensus among Lincoln's star players is they don't want to be known just because of the violence that surrounds them. Hamilton-Jordan said that the east side of Troost is home to plenty of talented people that are often overshadowed because of the community's reputation.

The students, like their coach, don't want their team or city to be judged solely on its tragedies. But a local documentary crew couldn't help but explore this team and everything that surrounds them.

Jacob Handy is the founder of Generational Wealth Sports Group, a sports agency that represents athletes, artists and has its own film department. He first heard of Lincoln through his brother, a football player at Kansas State, who trained with Blue Tigers defensive coordinator Michael Rose-Ivey.

Handy knew about the four Division I commits and their individual stories and immediately had the idea of creating a documentary.

Handy enlisted the help of a college friend, Nico Wiggins, who founded Nico Giles Media and is responsible for the production of the project that has been dubbed "For the City."

The docu-series will follow the Blue Tigers through the 2020 season, and Handy said he's trying to get the project picked up by a distributor for a fall 2021 release.

Lowe was hesitant to allow the cameras on the team's fabled blue turf because when Handy proposed the project he said it would strongly resemble "Last Chance U," the award-winning series that has followed multiple community college football teams.

Lowe recalled that those teams typically got worse after the cameras showed up and was hesitant to green light the project.

"Whether people want to admit it or not, the cameras are gonna get to you unless you have a strong understanding of yourself and not to let that persuade how you act in front of them," Lowe said.

Despite his reservations, the prospect of exposure for his players was too good to pass up. A sentiment not lost with Lincoln's athletic director, Ryan Glasgow.

"Being an inner-city team, surrounded by bigger suburbs in our area, a lot of those teams and conferences get a lot more recognition than our kids get even though our kids are just as talented," Glasgow said. "So, we always want to come up with creative ways to highlight them."

It's true the team is rich with talent, but maybe none were more gifted than running back Israel Gentry. Another character in Lincoln's story, who's playing career was cut short.

Lowe called Gentry Lincoln's best player when the Blue Tigers were undefeated going into the playoffs in 2019, but everything changed on the morning of Oct. 31, 2019.

Gentry's mother, Toinette Freeman, woke up but wasn't ready to get out of bed. The family usually started their days with a prayer, and Gentry was always the first to rise and would get everyone else ready for the morning routine.

By the time Freeman got out of bed, Gentry had left for school. Freeman made her way to work where she got the phone call every mother dreads.

Gentry was involved in a car accident and was in the hospital with life-threatening injuries. Freeman rushed to be by Gentry's side.

The star running back was the passenger with a friend on the way to school when the driver lost control and veered off the road and into a tree, according to the police report. Gentry was found in the back seat of the car with injuries that included a broken neck, spine, arm, shoulder blade and elbow, according to Freeman.

Although Gentry survived, he became a quadriplegic.

The next day, the Blue Tigers won their playoff game 38-10 with hundreds of Kansas City residents in attendance supporting Lincoln and Gentry.

"I appreciate all the support from my family and friends," Gentry said of the community rallying around his family.

Freeman said that her son is enjoying life now and is trying to get used to his new way of living. The mother of seven recalled one moment in Gentry's rehabilitation that made her especially thankful and emotional.

"I was so grateful when he started talking again," Freeman said. "He said 'Mom, thank you for saving my life.' And at that point, I felt so honored to be his mom."

Gentry's short-term memory is still coming back to him. He cannot specifically recall the accident, but anything that happened before is intact — even the times when he was on the sidelines with Lowe.

"He told me to go get his helmet and pads," Lowe recalled of an interaction with Gentry, who still wanted to suit up, after the accident.

'Everybody likes to talk about us'

Despite the cameras and drama, the Blue Tigers have positioned themselves for a another postseason run.

After a resounding 62-27 victory against Van Horn, Lincoln (7-2) is set to take on Grandview (6-5) Friday to try and keep its season alive in the District.

"Last year when we were 11-0, we were a Cinderella team. Everybody was still doubting how good we were," Lowe said. "This year, everybody likes to talk about us."

Who can blame them? Lincoln has not only transformed its football program, it's also changed the lives of its coaches and players.

Man is jailed for sexually assaulting unconscious woman on an airplane

NYC man, 54, 'wanted to kill Chuck Schumer' and 'anyone that claims to be a Democrat' as well as 'blow up the FBI'
World News