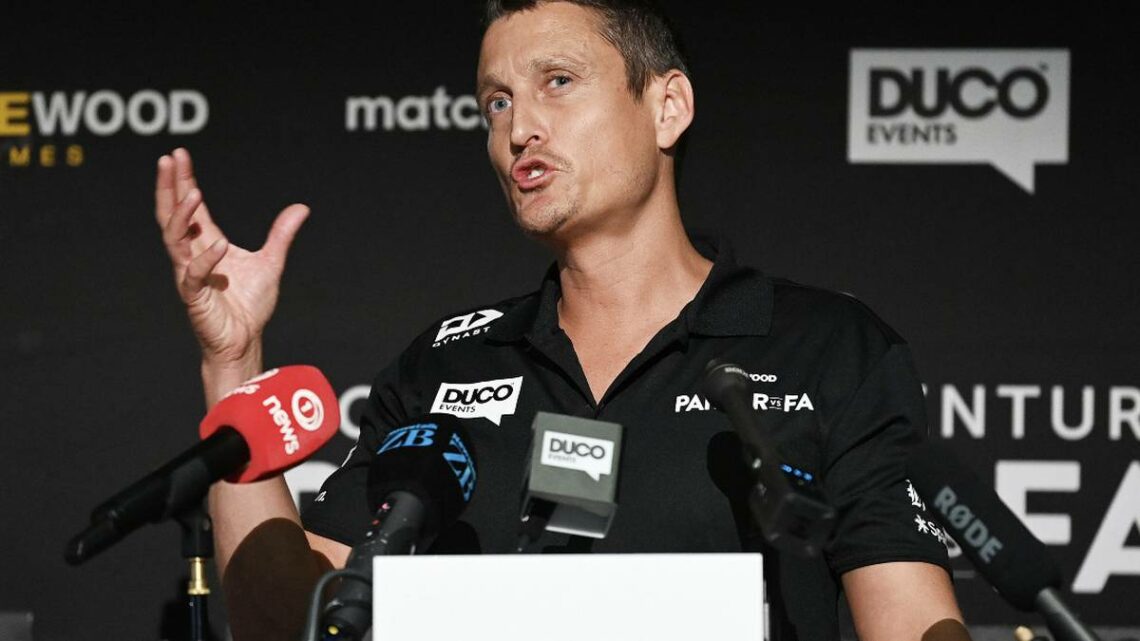 When the Government announced Auckland would move back to alert level 3 following the discovery of a new case of Covid-19 in the community a fortnight ago, it was a bit of pain in the neck for most of the city’s residents.

It was something a little more than that for Duco owner David Higgins, the promoter of tonight’s all-New Zealand heavyweight showcase between Joseph Parker and Junior Fa. A lengthy stay in partial lockdown would have meant a big hole in the company bank balance.

The fight had already been postponed once when Junior Fa underwent a medical procedure for what Higgins believes was an undeclared condition.

“I don’t believe it was an injury but in the end it was a blessing in disguise,” he says.

Although they lost about 15-20 per cent of their corporate table bookings and ticketing through the delay, it enabled Duco to secure more sponsor support and time for Parker to undergo a procedure to remove bone chips in his elbows.

Both fighters will now be fully fit and excuse free.

“On balance, the delay helped the promotion,” he said.

It has been the country’s health, rather than the fighters’, however, that has occupied most of his thoughts in the past couple of weeks. Another delay would have seriously hurt the promotion.

Even a day before the fight, Higgins refused to tempt fate. When the world sneezes, the promoter holds his breath. But with the little hand pointing to an hour when even the pandemic won’t be able to stop fight night, he finally felt comfortable talking about the risks associated with trying to stage events in a pandemic.

“If Auckland hadn’t gone back to level 1, we would have faced a week of vigorous contingency planning,” Higgins said, saying there was too much at stake to cancel the fight, but a postponement would have been necessary.

The key factor would have also been the easiest, with Duco having arranged potential alternative dates with Spark Arena on Auckland’s waterfront.

Other elements, though, presented a “contractual minefield”, including all-important overseas broadcasting rights.

“We have lost a couple because they might not have had space to screen us on the alternative date,” Higgins said, “but on the other hand we might have been able to pick up others.”

The food bill was another big issue. A late postponement wouldn’t have given Duco time to recall the food orders, the steaks and other perishables, that had to be pre-ordered to feed the black-tie guests paying four-figure sums for the pleasure of being served ringside.

There were plenty of other wrinkles that would have needed to be ironed out too, all costing time and money.

“We would have been at least $300k down; that’s coming straight out of Duco’s bank account,” Higgins said.

If the promoter sounds strangely matter-of-fact about the situation despite the six-figure sums on the line, it’s because he’s created a career around risk and has got better at managing it.

“I was concerned and preparing for the worst, but wasn’t panicking,” he said. “You try not to worry about things you cannot control.”

It’s a far cry from his early days in the fight game. If the Shane Cameron-David Tua fight in 2009 hadn’t been such a runaway pay-per-view success, Higgins was facing bankruptcy.

Over the past 11 years he has learned to spread the risk more evenly. Although he expects the night to be a pay-per-view success for Spark, his eggs are not all in that basket.

“I don’t want to bet the business on a boxing match. Not in a time of pandemic.

“This night will wash its face,” he said, referring to the fact it will cover all its costs, “and make a small profit. I’m happy with that.”

More importantly, it will provide Junior Fa with a life-changing payday – “he deserves it” – and, he hopes, relaunch Joseph Parker’s championship credentials after a long delay while the world kept sneezing.