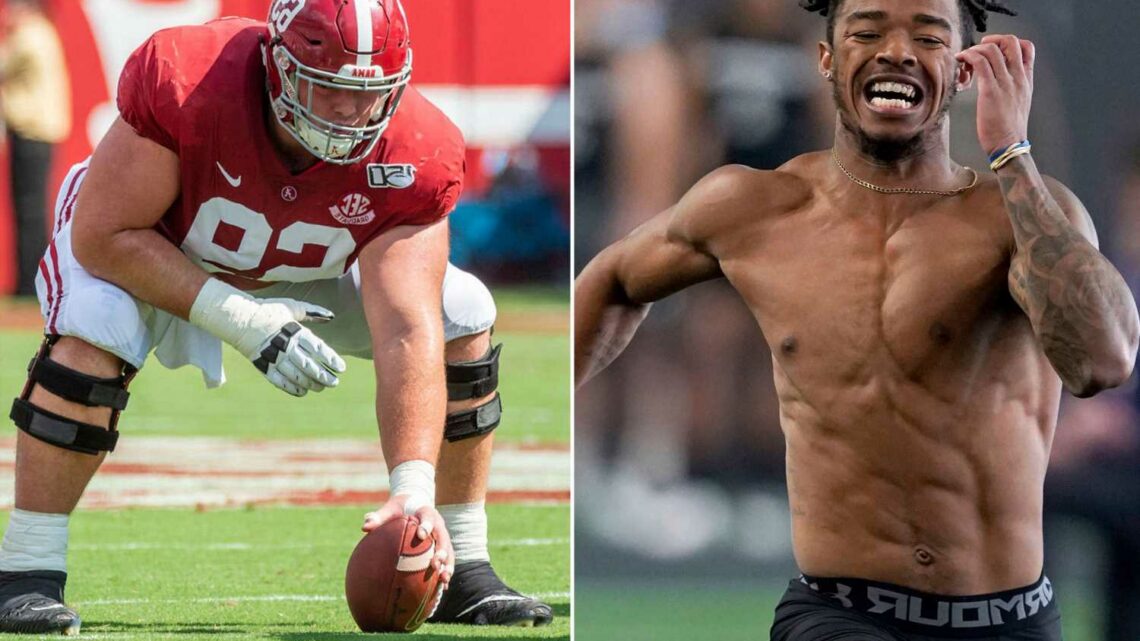 Preview in new tab(opens in a new tab)

This won’t be big Jets concern at NFL Draft

We are another week closer to the NFL draft and teams are making their final preparations.

This is the third of four Jets mock drafts The Post will do leading up to the real thing on April 29. Jets general manager Joe Douglas has a long list of holes to fill and he is armed with 10 picks.

We used Fanspeak’s mock draft tool this week. The computer drafted for the 31 other teams and we picked for the Jets. Here is our Jets Mock Draft 3.0:

No surprises here. The Jets have been zeroing in on Wilson for months. He will be the pick next week and, the Jets hope, their quarterback for the next decade-plus.

The top three cornerbacks — Patrick Surtain II, Jaycee Horn and Caleb Farley — all were off the board, so I went with Newsome. He was outstanding in coverage and at 6-foot, 192 pounds is big enough to play for Jets coach Robert Saleh, who likes big corners. There are durability questions after he missed three games in each of his three college seasons. He allowed only 10 completions in 2020, only one for more than 10 yards.

After addressing the biggest need, cornerback, we go to another one, the offensive line. Dickerson could play guard, or the Jets could move Connor McGovern to guard and have Dickerson play center. The big question is whether the medical staff would approve Dickerson, who is coming off ACL surgery and had four serious injuries in college.

Williams is projected to go earlier than this, but in this simulation he was there. Williams is not a speedster, but will run people over. He led the FBS in broken tackles (47) and first-down carries (72) in 2020. He was part of a committee in college, which would continue with the Jets, who have La’Mical Perine and Tevin Coleman.

Cox spent his first three college seasons at North Dakota State and was part of three straight FCS championships and a 45-1 record. He transferred to LSU before last season and showed he could compete in the SEC. He is a strong coverage linebacker, something Saleh will be looking for.

The Jets addressed their pass rush in free agency with the signing of Carl Lawson, but it still needs work. Perkins had 16.5 sacks for the Sooners and is powerful enough to play up front in Saleh’s scheme. A failed drug test in 2019 is a red flag, but the Jets drafted Mekhi Becton in the first round last year after he failed a test. Perkins’ brother, Ronnell, was signed by the 49ers last year as an undrafted free agent.

Wide receiver moved down the Jets’ list of needs after they signed Corey Davis in free agency, but they still need to add some depth to that position. Terry is an intriguing prospect who is worth taking a flier on. He averaged 18.8 yards per catch at Florida State and set a school record with five touchdown catches of more than 70 yards. Two knee surgeries could scare teams off, but this late in the draft, it is worth taking a shot.

He spent four years at Temple before transferring to Ole Miss. He could be an immediate special teams contributor and a depth player at tight end, or the Jets could try him at fullback.

The Jets need to add to the safety room with Marcus Maye’s future still uncertain and Lamarcus Joyner only a short-term solution. Wiggins had injury issues in college that push him down the board.

A high-level youth hockey player, Doyle started four years at Miami (Ohio) and could be a developmental line player for the Jets.

Showcase Your Plants in These Gorgeous Succulent Pots
World News