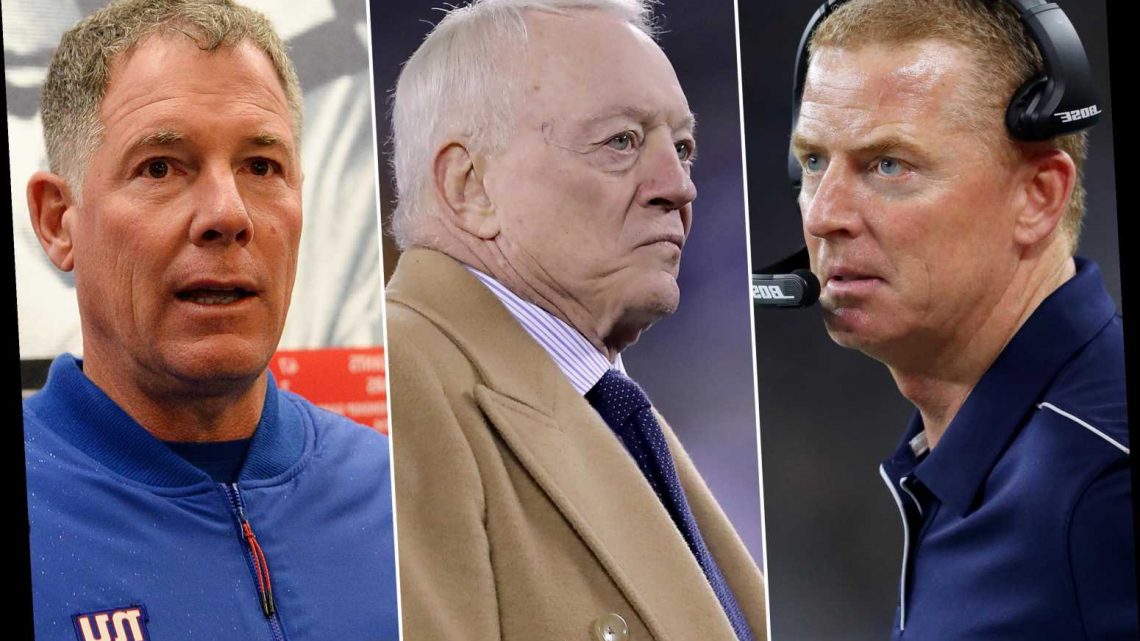 Jerry Jones didn’t exactly provide a ringing endorsement for Jason Garrett and his coaching staff following the Cowboys’ low-octane 13-9 loss to the Patriots.

Tom Brady’s offense managed just one touchdown, a 10-yard pass to rookie N’Keal Harry, the 2019 first-round pick’s first career TD reception. The score was set up by a blocked punt by Matt Slater, New England’s seven-time Pro Bowl special teamer, however, prompting Jones to tell reporters after the game that “special teams is a total reflection of coaching.”

Bill Belichick’s top-rated defense also held Dak Prescott and the Dallas offense to three field goals and 321 total yards, about 125 below their league-leading average for the season. This performance came on the same day NFL Network reported that Garrett hopes to land with the Giants if he is fired by Jones or is unable to negotiate a contract extension with the Cowboys (6-5), and if Pat Shurmur is axed by Big Blue.

“With the makeup of this team, I shouldn’t be this frustrated,” Jones said. “I don’t think there’s a game where a coaching staff couldn’t do better.”

That rarely has been the case for Belichick, who added another ridiculous NFL record alongside Brady, as New England (10-1) became the first team in NFL history to record at least 10 wins in 17 consecutive seasons.

The 49ers, Brady’s childhood team growing up in northern California, had accomplished the feat of 16 seasons in a row with Joe Montana and later Steve Young as their starting quarterbacks from 1983-98. For local perspective, the Jets have managed just four 10-win seasons since the Patriots’ streak began in 2003, while the Giants have reached double figures in wins five times over that span.

This P.I. Didn’t Cost Them

The Saints had another critical pass interference decision go against them late against Carolina, but New Orleans kicker Wil Lutz drilled a 33-yard field goal as time expired for a 34-31 win at the Superdome.

Panthers kicker Joey Slye had pushed a 28-yard attempt at the other end with two minutes remaining — his third missed kick of the day, along with extra points — after Saints safety Chauncey Gardner-Johnson was ruled via a video review to have interfered with Panthers receiver Jarius Wright deep in New Orleans territory, setting up a first-and-goal situation.

Of course, the NFC South-leading Saints (9-2) were the impetus for the rule change making interference plays reviewable after they were robbed of a likely trip to the Super Bowl last year on an uncalled DPI by the Rams in the NFC Championship game.

“It was kind of my impression, just based upon what I’ve seen, is that they’re not going to overturn anything, unless it’s what happened in the NFC Championship game. Where it’s a total timing thing, it prevents the tragedy. The tragedy,” Drew Brees said after the game. “One got overturned today. That’s one out of I don’t know how many that have not been overturned.

“But that was interesting. Why that one, versus some others? Again, at some point, there’s someone who’s making a judgment call, a human decision is being made. It’s impossible for that to always be consistent.”

Brees finished 30-for-39 for 311 yards and three touchdowns, including one to Michael Thomas, who caught 10 passes to push his record-pace total to 104 catches through 11 games.

Have to Play 60 Minutes

Dwayne Haskins was so excited about his first victory as an NFL starter, that the Redskins’ rookie quarterback prematurely celebrated Washington’s 19-16 win over Detroit and missed his team’s final possession in victory formation.

Haskins, who moved his team into field-goal range to set up Dustin Hopkins’ go-ahead 39-yarder with 16 seconds remaining, was taking photographs with fans behind the bench in the closing seconds when Lions quarterback Jeff Driskel was intercepted with 10 to go. Backup quarterback Case Keenum, and not Haskins, took the field to kneel down and run out the clock for 2-9 Washington.

“I think he thought the game was over,” Washington coach Bill Callahan said of Haskins, the 15th-overall pick in the draft out of Ohio State. “I’m happy we won. But we’ll address that.”

MVP candidate Russell Wilson became the first quarterback in NFL history to begin his career with eight straight winning seasons, clinching another as Seattle improved to 9-2 with a 17-9 win over banged-up Philadelphia.

Wilson, who completed 13 of 25 passes for 200 yards with one touchdown and one interception, has started all 136 games since his rookie year in 2012, including 13 in postseason play.

“I thought we played a great game in a sense that we were able to move the ball extremely well against a really tough defense, one of the top defenses we’ve played this year, with all their players, all their schemes and all the different things they do,” said Wilson, who has tossed 24 TD passes against just three interceptions this season.

Mason Rudolph, who was benched in Pittsburgh’s 16-10 edging of winless Cincinnati (0-11), insisted afterward that suspended Browns defensive end Myles Garrett’s assertion that the Pittsburgh quarterback used a racial slur before Garrett hit him over the head with his helmet two Thursday nights ago is “totally untrue.”

Rudolph was 8-for-16 for 85 yards and one interception when he was replaced in the third quarter by Devlin Hodges, who zipped a 78-yard touchdown pass on his first drive to wideout James Washington as Pittsburgh improved to 6-5.

Condolences to those who had the Bears laying 6 ¹/₂ points to the Giants. Chicago was up 19-7 until Daniel Jones’ 4th-and-18 heave under pressure was hauled in by Golden Tate in the end zone for a 23-yard touchdown with 4:10 remaining. Also, Dallas’ curious decision to kick a field goal down seven with six minutes remaining ended up covering another 6 ¹/₂ -point spread against New England.

Already without Desean Jackson (core surgery), the Eagles (5-6) played Sunday without fellow wide receivers Alshon Jeffery (ankle) and Nelson Agholor (knee), running back Jordan Howard (shoulder) and starting right tackle Lane Johnson (concussion) in their loss to the Seahawks. Philadelphia quarterback Carson Wentz also briefly left the game in the third quarter for X-rays on his throwing hand (negative), finishing the game 33 of 45 for 256 yards, with one touchdown and two picks.

Seahawks edge rusher Jadeveon Clowney was inactive for Seattle with a hip injury. Saints left tackle Terron Armstead was carted off the field with a left foot injury against Carolina. The Panthers lost two starters — defensive tackle Dontari Poe (knee) and left guard Greg Van Roten (toe) — in the first half. Neither returned to the game.

Bills running back Frank Gore ran for 65 yards in Buffalo’s 20-3 win over Denver to move past Barry Sanders for third on the all-time rushing list with 15,289 yards. Only Emmitt Smith (18,355) and Walter Payton (16,726) have totaled more yards than Gore, a 15-year NFL veteran. Bills quarterback Josh Allen added 185 passing yards and 56 more on the ground (as part of 245 team rushing yards) as Buffalo improved to 8-3. … Buccaneers defensive tackle Vita Vea became the heaviest player in NFL history (347 pounds) to catch a touchdown pass in Tampa Bay’s 35-22 win over Atlanta. It was one of three TD tosses for Jameis Winston, to offset two interceptions. Bucs receivers Chris Godwin (seven catches, 184 yards) and Mike Evans both went over 1,000 receiving yards in Tampa’s 11th game of the season. Evans joined Randy Moss as the only players in NFL history to record at least 1,000 in each of his first six NFL seasons. … Panthers running back Christian McCaffrey totaled 133 yards from scrimmage and scored two more touchdowns, giving him 16 for the season, in Carolina’s loss to New Orleans. … Browns quarterback Baker Mayfield threw for 327 yards and three touchdowns — two to Jarvis Landry and one to Odell Beckham Jr., the former Giants’ first since Week 2 against the Jets — in Cleveland’s third straight win, 41-24 over Miami. … Broncos quarterback Brandon Allen was held to 82 passing yards on 25 attempts amid Buffalo’s shutdown of Denver’s offense (130 total yards and nine first downs). … Seahawks running back Rashaad Penny managed 129 rushing yards, including a 58-yard touchdown, for Seattle (9-2) in its win over Philadelphia. … Titans quarterback Ryan Tannehill threw for 259 yards and two touchdowns and ran for two more scores as Tennessee (6-5) won for the fourth time in five games with a 42-20 clubbing of Jacksonville (4-7).

The former Heisman Trophy winner rushed for 159 yards on 19 carries, including touchdown bursts of 74 yards and 7 yards in Tennessee’s 42-20 win over Jacksonville.

Landry had a monster day against his former team, with 10 catches for 148 yards and two touchdown receptions from Baker Mayfield in Cleveland’s 41-24 win over Miami.

“It wasn’t our best game, by far, it wasn’t their best game, and quite honestly it wasn’t New York’s best game. Look, I’m not going to get into it on the replay relative to the fouls, the changes that took place in the offseason. But sitting in on every one of those meetings, I don’t know that it’s exactly what we discussed, where we are today with it. In fact, I’m pretty sure that it’s not.” — Saints coach Sean Payton, after a non-call overturned by review into a pass interference penalty nearly cost New Orleans in a 34-31 win over Carolina.