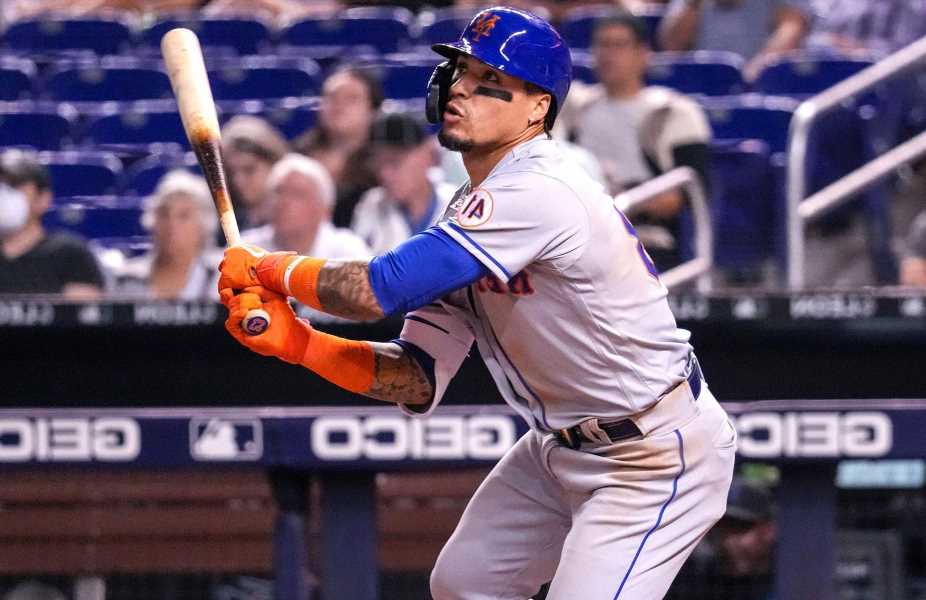 Mets the pick in this spot

Javier Baez almost gets into first fight as a Met

MIAMI — Javier Baez chirped toward the Marlins dugout as he jogged from third base to home plate in Wednesday’s eighth inning, the spoils for hitting a go-ahead home run.

The Mets had desperately needed the spark. Baez, swinging at an Anthony Bass slider that hung over the plate’s outside corner, slapped a shot over the right-field fence leading off the inning, helping to save his team from the hell of losing a third straight game to the lowly Marlins.

The 5-3 victory at loanDepot park ended the Mets’ losing streak at three and at least temporarily halted the Phillies’ ascent in the NL East standings. The Mets will enter their series finale Thursday against the Marlins leading the Phillies by 1 ½ games, with a weekend series in Philadelphia awaiting.

Baez’s full talents were on display on a night the Mets again slogged with runners in scoring position, finishing 2-for-13. Included was an artistic slide by Baez into home plate in the second inning that allowed the Mets to steal a run.

Manager Luis Rojas held a team meeting before the game — a changeup of sorts for a team that had combined to score eight runs in the previous three games. The Mets entered play 29th in MLB, averaging 3.81 runs per game.

“We talked a little bit as a family in there and we are just staying within ourselves for the game of the day and nothing more than that and having fun and trust,” Rojas said.

The manager added: “I had a little talk with the team, nothing like a rah, rah meeting or anything, just getting connected as the family would.”

The Mets flushed a 3-0 lead and watched the Marlins tie it on Jesus Aguilar’s homer leading off the sixth against Jeurys Familia, who had been summoned after Aaron Loup got the final two outs of the previous inning. The homer was the second allowed by Familia in his last four appearances.

In the eighth, Baez homered — his second blast since joining the team on Saturday — and the Mets got an insurance run on a passed ball. Baez’s gestures toward the Marlins dugout were a continuation from a night earlier, when he jawed with Marlins pitcher Richard Bleier.

Carlos Carrasco gave the Mets a second straight solid outing, albeit another shortened one as he builds up in his return from a torn right hamstring. The right-hander lasted 4 ¹/₃ innings and allowed two earned runs on five hits with five strikeouts.

Carrasco didn’t dent until the fifth, when Joe Panik delivered a pinch-hit RBI single for the Marlins’ third hit of the inning. The Marlins pulled within 3-2 on Jazz Chisholm Jr.’s RBI fielder’s choice.

Baez’s base-running guile was on full display in the second when he masterfully eluded catcher Alex Jackson’s tag on a throw to the plate that had him beaten by plenty. Baez hooked his arm around Jackson and touched the plate with a swipe, giving the Mets their second run of the inning, on Tomas Nido’s RBI fielder’s choice.

Dominic Smith doubled leading off the inning and Baez’s single placed runners on the corners before Michael Conforto walked to load the bases. Jonathan Villar’s RBI fielder’s choice brought in a run, followed by Baez’s handiwork on the Nido grounder. A third fielder’s choice in the inning gave the Mets a 3-0 lead — pitcher Zach Thompson threw Carrasco’s comebacker into center field attempting to start a double play.