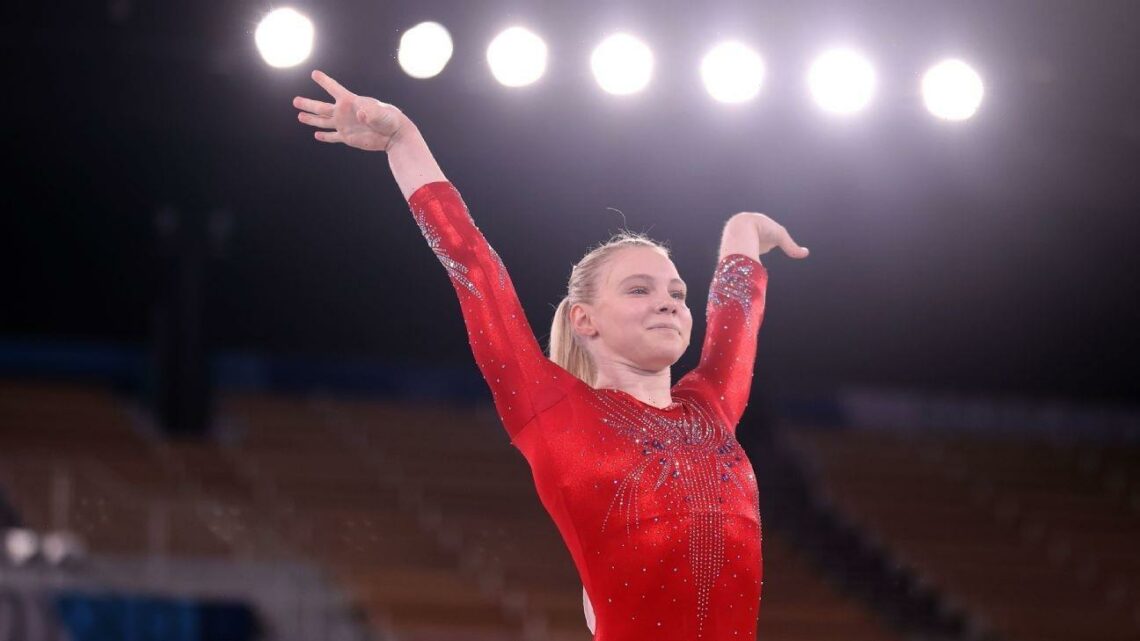 TOKYO — Jade Carey wasn’t supposed to be in Thursday’s all-around competition at the Tokyo Olympics. She had finished in ninth place overall during Sunday’s qualifying, but with the third-highest score among the Americans, she wasn’t eligible to compete.

Besides, she had never competed in an all-around final in a worlds or Olympics.

That all changed on Wednesday when Simone Biles announced she would be withdrawing from the event to focus on her mental health. Carey would take her place and join Sunisa Lee.

Just 24 hours after learning the news, Carey showed few signs of nerves or inexperience as the competition got underway at Ariake Gymnastics Centre. She earned a 15.2 on vault, her first event of the night, and jumped into second place. Carey didn’t end up on the medal stand — a fall on balance beam all but took her out of contention as she finished in eighth place.

With her soft-spoken and shy demeanor, Carey often gets overshadowed on a team filled with gregarious personalities, social media savvy and intriguing backstories. But on Thursday she had proved to the world — and to herself — she belonged on the sport’s biggest stage.

“I feel really proud of myself for how I was just able to step in, in the last minute and compete in the all-around final,” said Carey, who is now a gold-medal contender on vault after Biles withdrew from that event as well. “It means everything to me to be able to have this opportunity. I just wanted to go out there and do the best I can and have a lot of fun. And I feel like that’s exactly what I did.”

If Carey, 21, didn’t seem fazed by the predicament or outcome, it’s likely because facing the unexpected and superseding expectations is nothing new for her. In fact, Carey has built an entire career out of just that.

Unlike most of her peers on the Olympic team who turned elite as preteens and spent years training at national team camps, Carey competed as a level 10 gymnast — the level just below elite — on the junior circuit until she was nearing her 17th birthday. She verbally committed to Oregon State during her freshman year of high school and had planned on going the NCAA route. She hadn’t been on the elite radar; it simply wasn’t in her plans.

Named to the U.S. team for the world championships later that year, she took home silver medals in her two signature events. It was just her third elite competition.

What happened next was even more unprecedented, though.

In 2015, the International Gymnastics Federation introduced another method of qualifying to the 2020 Olympic Games. For the first time, individual athletes would be able to qualify on their own for a nominative spot through acquiring points at the World Cup series. It was immediately confusing and controversial, but Carey and her father and coach, Brian, saw an opportunity.

Instead of leaving her Olympic fate in the hands of a selection committee, they took control of her own destiny. She announced her intention to go solo and earn her spot as an individual. USAG said it supported her decision, and in 2019 she clinched the spot.

It was “nominative” — meaning only she could use it. If she declined it or became injured, it would go to another country. And that immediately caused mixed reactions.

While her teammates waited anxiously to know if they would be going to Tokyo, Carey’s ticket was fully punched. There was endless speculation as to what would happen if Carey finished in the top two at the Olympic trials and earned a team spot, meaning her individual berth would go unused. She was even called “self-centered” and accused of creating “chaos” before she ultimately announced her decision to accept her individual position. This ensured there would be six American women — not five — competing at the Olympics.

Carey didn’t let any of the criticism derail her focus. On Sunday during qualifying, Carey had one of the best meets of her career and showed she was more than just an event specialist.

She backed that up on Thursday in the all-around final.

“I decided to remember that I’ve been training all-around this whole time, so I knew that I could do it,” Carey said. “I think being able to be out on this stage again is going to only help me for finals in the future.”

She’ll be able to put those lessons to immediate use. Carey will compete in the vault final on Sunday and the floor final on Monday. She had the second-highest qualifying score on vault and third-highest on floor, and is a medal contender on both.

Carey also has the chance to debut her much-anticipated triple twisting double layout on floor. She has teased the skill — considered the hardest tumbling pass in the world on the event — in practice and would have it named after her if she were able to successfully complete it on Monday.

While many American medal winners, including Biles, have turned professional and opted to forgo their NCAA eligibility over the years to capitalize on their newfound opportunities, Carey said prior to the Olympics she was still planning to attend Oregon State.

And we’ll probably never see a journey to this moment quite like Carey’s again.

“What a night last night was,” Carey wrote on Instagram on Friday. “It was all I ever dreamed of. It wasn’t perfect but I look back and am so proud of how far I have come and what I did in my first-ever all-around final.”

Struggling to lose weight? The 6 diet mistakes you could be making
World News