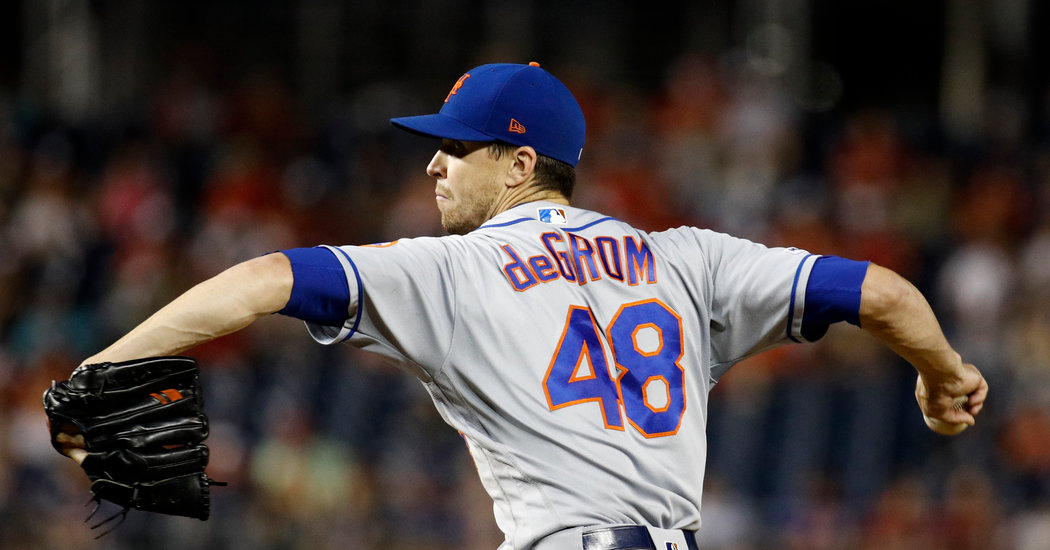 Shortly after pitcher Jacob deGrom signed a contract extension worth $137.5 million with the Mets on the eve of opening day in March, his father, Tony, waited for him inside The Diplomat Room off the lobby at the Ritz-Carlton in Arlington, Va.

Tony deGrom considered his son’s accomplishments a day before he would start the Mets’ opener: rookie of the year in 2014, World Series runner-up in 2015, and the 2018 Cy Young Award winner. The elder deGrom believed his son’s most recent accomplishment would not be his peak.

The father proved prophetic Wednesday night. Jacob deGrom, who battled through a tough stretch in April and overcame what Manager Mickey Callaway called a “barking” elbow, won the National League Cy Young Award and became the 11th pitcher to claim the prize in consecutive years.

“I said it was a dream to win one, but to win back to back, honestly I’m kind of speechless right now,” deGrom said on MLB Network after his win was announced.

He has maintained this year that he could not imagine becoming a member of such an exclusive club. Sandy Koufax, Denny McLain, Jim Palmer, Pedro Martinez, Roger Clemens, Greg Maddux, Randy Johnson, Tim Lincecum, Clayton Kershaw and Max Scherzer have each won the award in back-to-back years.

“You knew Jake was going to be a pretty good pitcher,” said Mets pitching coach Phil Regan, who worked with deGrom in the minors before rejoining him in the majors in June. “To win two Cy Youngs puts you in elite company.”

Justin Verlander of the Houston Astros won his second American League Cy Young Award, adding it to the one he earned with the Detroit Tigers in 2011. Verlander narrowly edged his teammate Gerrit Cole: Verlander received 17 first-place votes and 171 total points from the Baseball Writers’ Association of America, while Cole had 13 first-place votes and 159 points. It was the first time two pitchers from the same team had finished first and second in the A.L. Cy Young voting.

Though deGrom was not as sharp as in 2018, when he posted a 1.70 E.R.A., he concluded the 2019 season with 23 straight scoreless innings. His 255 strikeouts were the most in the N.L., and his 2.43 E.R.A. ranked second behind the 2.32 of the Los Angeles Dodgers’ Hyun-Jin Ryu, who tied the Washington Nationals’ Scherzer for second place in the voting. Just as in 2018, deGrom won 29 of the 30 first-place votes; Ryu received the other first-place vote after going 14-5 and striking out 163 batters.

Wednesday brought one more night of mid-November celebration for a franchise that has failed to capitalize on deGrom’s dominance the last three years. On Monday, Pete Alonso was chosen as the National League rookie of the year. After completing a record-setting season, Alonso said that he looked up to deGrom, who had established himself as a phenom in New York five years earlier.

“Jake’s the best,” Alonso said. “I’ve learned a ton just watching how he goes about his business.”

DeGrom, who finished the season with an 11-8 record, saw plenty change around him in the last year. His former agent, Brodie Van Wagenen, became the Mets general manager before the season. Despite overseeing deGrom’s first Cy Young campaign, the pitching coach Dave Eiland was dismissed in June, when the starters and the bullpen were struggling and the team was 35-39. The staff had a 4.67 E.R.A., which ranked 20th in the majors, and 16 blown saves, which ranked last. Regan replaced Eiland, and deGrom returned to form in the second half of the season.

After his last start, deGrom acknowledged that he wanted to return to the postseason to feel more fulfilled.

“I’m happy with how I ended my season, but not happy where we’re at,” he said. “The goal is to win a World Series, and we fell short of that goal. It’s a tough night, a tough pill to swallow.”

On Wednesday, at least, he was beaming after another individual honor that firmly established him among the greatest pitchers in the game.