Home » Sport » It’s Not Your Imagination: Baseball Players Are Getting Hurt a Lot 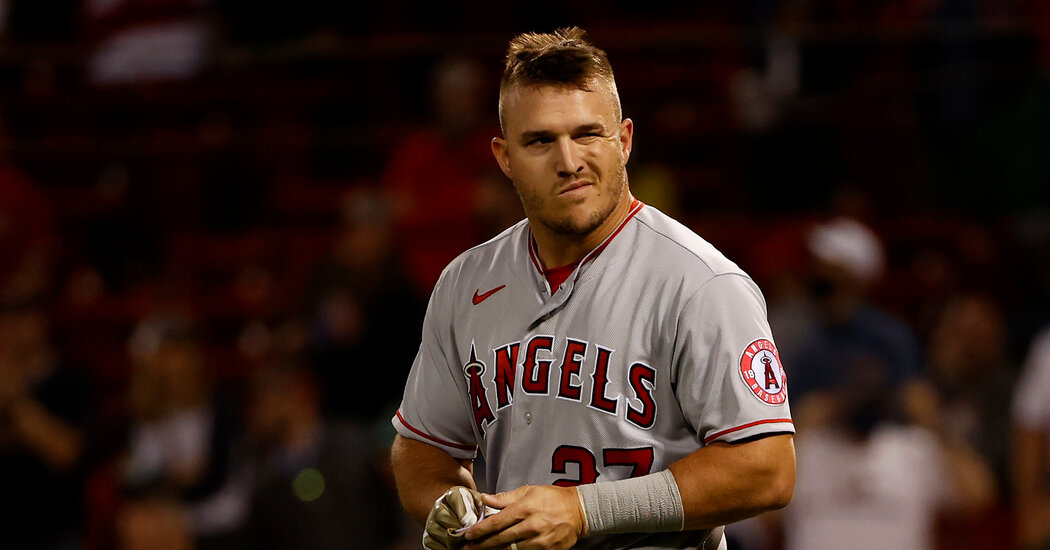 It’s Not Your Imagination: Baseball Players Are Getting Hurt a Lot

Every day in Major League Baseball this season, the list of new ailments has looked like a CVS receipt.

Already on the I.L. were some of the best players in the sport, including outfielders Mike Trout, George Springer and Bryce Harper and infielders Corey Seager and Trevor Story.

Injuries are inevitable in sports, particularly in one built around explosive actions — firing a pitch, unleashing a swing, bursting out of the batter’s box. But what is happening in M.L.B. this season has not only alarmed people around the game, it has underscored how far behind some experts say baseball is compared to other sports in terms of injury prevention, particularly given the sharp jump in muscle strains. It has also made some of the worst fears of teams, executives and players about the abridged 2020 season come true.

“I think a lot of it has to do with the short season” in 2020, said Yankees reliever Zack Britton, who is making his way back from surgery to remove a bone chip from his throwing elbow, often the byproduct of lots of pitching.

He added: “Hitters probably missed out on about maybe 400 at-bats or something like that. That’s a lot of at-bats and buildup that they’re missing. Pitchers, the same thing with innings. And think about the minor leagues guys especially; they didn’t have anything. So to come back now and have these workloads, it’s going to be tough on your body.”

The M.L.B. season is the longest in professional sports, a 162-game regular season sandwiched by nearly two months of spring training and a month for the playoffs. But because of the coronavirus pandemic, and disagreements between M.L.B. and the players’ union over the length of the season, the 2020 campaign was only 60 games, followed by a month of playoff games. (The season for the minor leagues, whose players do not have a union, was canceled entirely.) 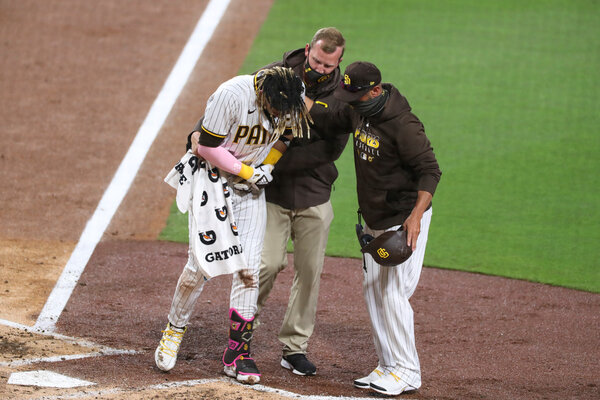 So 2020 was defined by starts and stops: The traditional major league spring training was shut down because of the pandemic in March; players worked out — or not — for months without any idea of when a season might start; a second preseason camp was held in July; and the regular-season sprint started in late July.

“The way these guys prepared and trained last year, and into the off-season, and then ramping up again to try to do this for 162, is just different than how they prepared last year, and that’s a really big change,” Milwaukee Brewers General Manager Matt Arnold said in a phone interview. “So it does feel like it’s been more about learning how to adapt after such a strange season that has led to these types of injuries.”

Arnold has a front-row seat to the scourge of injuries in the sport. The Brewers entered Wednesday with a 29-26 record, third place in a taut National League Central race, even after the key outfielders Christian Yelich, the 2018 winner of the N.L. Most Valuable Player Award, and Cain each landed on the I.L. more than once and with injuries to players such as second baseman Kolten Wong, catcher Manny Pina and pitcher Brett Anderson.

As of last week, the Brewers ranked third in M.L.B. in total games missed by hurt players, with 518, according to the tracking site Man-Games Lost. (Those numbers, though, also included players who, for virus-related reasons, landed on the injured list.) The San Diego Padres (678 games missed by players) and the Tampa Bay Rays (542) have had more injuries than anyone, yet are two of the best teams in M.L.B. The Mets, who are leading the N.L. East, rank first in the advanced metric of most missing production.

“The entire league has a lot of injuries, so nobody is going to feel sorry for you,” said Padres Manager Jayce Tingler, whose team has 15 players on the injured list, including an entire bullpen’s worth of relievers.

He added later: “We knew going from 60 games to 162, and everything the league threw at us, there were a lot of indicators that said it’s going to take a big group of ballplayers to get through the year. And so far, a quarter of the way through the season, that has played true.”

Compared with 2019 spring training and the first two months of that season, the number of I.L. stints had increased by 31 percent through the same point in this season, with pitchers making up the bulk of those I.L. appearances, according to Stan Conte, a former head trainer for the San Francisco Giants and the Los Angeles Dodgers who consults with teams through his injury analytics firm.

(There are several caveats: New rules were adopted for baseball amid the pandemic, such as seven-inning doubleheaders and a runner on second base at the start of each extra inning; Conte didn’t compare 2021 to last year because 2020 provided such a small sample size; he included only orthopedic injuries, and thus no viral infections; active rosters increased from 25 players in 2019 to 26 in 2021; and teams sometimes use the injured list to manage their rosters, such as putting a player there with a minor ailment he could play through simply to give a roster spot to someone else.)

In contrast to being hit by a pitch or breaking a bone while sliding into a base, medical experts believe soft-tissue injuries like oblique or calf strains are preventable. Conte said that while the number of injuries was relatively unchanged from 2018 to 2019, hamstring ailments — the most common diagnosis in M.L.B. — had been increasing. He said one theory for the rise in injuries this season could be that teams were perhaps too cautious in building players up from a small to a large workload.

“Let’s just say running, for instance, at 90 percent, which is still fast, but now comes April 1 and they’ve got to run first to third at 100 percent, but they really haven’t done it much,” Conte said in a phone interview. “And they may not have had as many at-bats in spring training, and they’re going to try to take it easy.”

Gary McCoy, a former strength coach in the Miami Marlins’ and the Houston Astros’ minor league systems, said that most soft tissue injuries could be prevented. In 2016, using a variety of techniques, McCoy began overhauling the training of the oft-injured roster of the CTBC Brothers, a professional baseball team in Taiwan, and the number of soft-tissue injuries dropped to zero in four years.

Now the vice president of performance at Kinetyx Sciences, a company developing shoe inserts that track performance, McCoy pointed to a number of underlying problems with injury prevention in the sport. Among those he listed: not enough tracking of fatigue to a lack of training of the whole body (“baseball is the most asymmetrical sport on the planet; if you’re a left-handed-hitting and left-handed-throwing outfielder, you turn right for nothing”) and not using a player enough, a more significant consideration now after the pandemic-affected 2020 season.

“We’ve got this incorrect theory that permeates the sport,” McCoy, also a strength and conditioning coach for the Australian national baseball team, said in a phone interview. “I call it the ‘bullets in the gun’ approach. They’ll turn around and say, ‘We’ll cap his pitch count, and then he’ll have more bullets available for the next game.’ What we’re doing is de-evolving the athlete. It’s not a bullets-in-the-chamber approach; it’s about building a bigger chamber.”

McCoy said that baseball was behind other sports, like soccer and football, in terms of preventing injuries through measures like collecting biometric data and adopting the right culture. (According to the collective bargaining agreement, wearable devices are voluntary for M.L.B. players.)

“I don’t claim to have the answers to all of them, but do I think that as an industry we could be more proactive?” said Tingler, the Padres manager, who is a former minor league outfielder. “I, 100 percent, absolutely do.”

Baseball is very different now, said Britton, 33, who is in his 10th major league season and whose team overhauled its strength and conditioning staff after setting a M.L.B. record when 30 players landed on the I.L. in 2019, a mark that might fall this season. He said that pitchers, for example, exert themselves more and throw harder than ever and that players train differently, a potential reason for the jump in soft-tissue injuries.

“Today’s players do such a good job of prioritizing their health, their bodies and doing everything they can to stay in shape and stay on the field,” Rays Manager Kevin Cash said. “It’s just a lot. It’s a grind. They play a lot of games.”

As of last week, only the Cleveland Indians had fewer games (118) missed by players because of injuries than the Kansas City Royals (160), according to Man-Games Lost. Asked how they had pulled that off, Royals Manager Mike Matheny looked around the visiting manager’s office for wood to knock on.

Matheny, a major league catcher for 13 years, said the health data being collected now was “light-years” ahead of a decade ago. He said the Royals tried to make educated guesses about injury red flags, schedule rest for those players and compare notes with sports officials abroad — not unlike other teams. Mere luck, though, could also be playing a part.

“We’re trying to be careful, but we’re also trying to push,” said Matheny, whose team was 27-26 entering Wednesday. “So this is where I believe the advancements in the game have been so crucial for us to take all of the information we’re getting from sports science, from sports medicine, and then also use some of the experience that we have and hopefully some of the relationships we have. But it’s kind of uncharted waters as far as the game having that kind of break.”