Home » Sport » ‘It was bull’: Jets furious at refs over team’s record futility 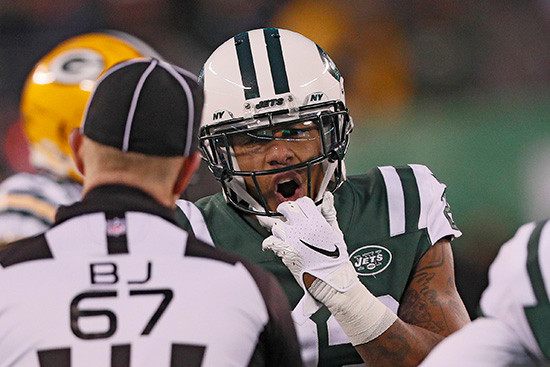 ‘It was bull’: Jets furious at refs over team’s record futility

Another week brought another defensive collapse by the Jets … this one with an assist from the officials.

For the third time in four weeks, the Jets lost a game they led in the fourth quarter. This time it was a 44-38 defeat in overtime to the Packers after their star quarterback, Aaron Rodgers, ran for two touchdowns in the fourth quarter and then threw the game-winning touchdown to overcome a 15-point Jets lead at MetLife Stadium.

The Jets were not mad at Rodgers after the game, though. Their fury was directed at the officials. The Jets were penalized 16 times for 172 yards, a franchise record. In the fourth quarter and overtime, they committed eight of those penalties for 109 yards.

The most costly call of the game came in overtime. On third-and-10 from the Packers’ 40, Rodgers threw a pass down the sideline toward Marquez Valdes-Scantling that fell incomplete. Cornerback Trumaine Johnson was flagged for pass interference, though, giving the Packers a first down at the Jets’ 27 — a gain of 33 yards.

After offsetting penalties, Buster Skrine was called for pass interference, giving the Packers the ball at the 6. A holding call on Green Bay moved the ball back to the 16, and then Rodgers hit Davante Adams, who beat Morris Claiborne, for a 16-yard touchdown and the win.

“I think it was bull[crap] myself,” Claiborne said of the officiating. “Period.”

The Jets are now 4-11, losers of seven of their last eight games, heading into the season finale with the Patriots. The Packers improved to 6-8-1.

The Jets can blame the officials all they want, but they had this game won if they could have just finished the game — something that has been an issue for two years. But the defense yielded 540 total yards to the Packers — 328 in the second half. Rodgers finished the game 37-of-55 for 442 yards with two passing touchdowns and two rushing touchdowns. Adams had 11 catches for 71 yards and the game-winner.

The late-game collapse wasted what was Sam Darnold’s best day as a pro. The rookie was 24-for-35 for 341 yards, three touchdowns and a rating of 128.4. The yards and rating were his career bests.

The Jets had a 35-20 lead when the fourth quarter began after Darnold tossed two touchdowns in the third quarter. The Packers settled for a field goal with 11:45 left in the game after a seven-play drive stalled at the 20.

Even though the Jets had a two-score lead, you could feel they would be in danger if they could not stop Rodgers.

The Jets punted on their next drive, an opportunity lost they would later lament.

Rodgers responded with an 8-play, 94-yard drive that featured three killer penalties form the Jets. Darryl Roberts was flagged for unnecessary roughness. Then, Skrine was called for pass interference that put the ball on the 3. On the next play, Jamal Adams was flagged for pass interference to put the ball on the 1. From there, Rodgers scrambled for a 1-yard score and the lead was cut to 35-30.

“I actually like having my money in my pocket so I’m going to keep my comments to myself,” Adams said about the pass-interference call.

The Jets got the ball back with 6:27 left in the game and a chance to run the clock down. They converted a fourth-and-1 when they ran a fake punt from their own 31 and Rontez Miles gained 4 yards. But on third-and-19, Darnold threw the ball in the dirt when a screen pass was covered. If he had taken the sack, the clock would have run. Instead, Green Bay took over with 3:12 left in regulation.

Rodgers dissected the defense with his arm and his legs. He showed no signs that he was dealing with a groin injury. His 23-yard scramble got the ball to the 1. The Jets stopped the Packers three times, but on fourth-and-1, Rodgers stuck the ball across the goal line. The Jets felt they had stopped him, with linebacker Neville Hewitt knocking the ball from his outstretched hands. But the officials ruled it a touchdown and the call was upheld to give Green Bay a 36-35 lead.

“He didn’t score,” Hewitt said. “You saw what I saw. Did you think he scored?”

On the subsequent two-point try, Darryl Roberts intercepted the ball and returned it for what should have been two points for the Jets. Instead, Roberts was flagged for holding on Jimmy Graham. With another chance, Rodgers ran in for two points and the 38-35 lead.

Andre Roberts returned the kickoff 51 yards to the Packers 38, which set up a Jason Myers game-tying field goal with 17 seconds left.

The Packers won the coin toss in overtime, giving Rodgers the ball and it was over.

“If you get a guy like that down,” Jets linebacker Avery Williamson said, “you’ve got to keep him down.”