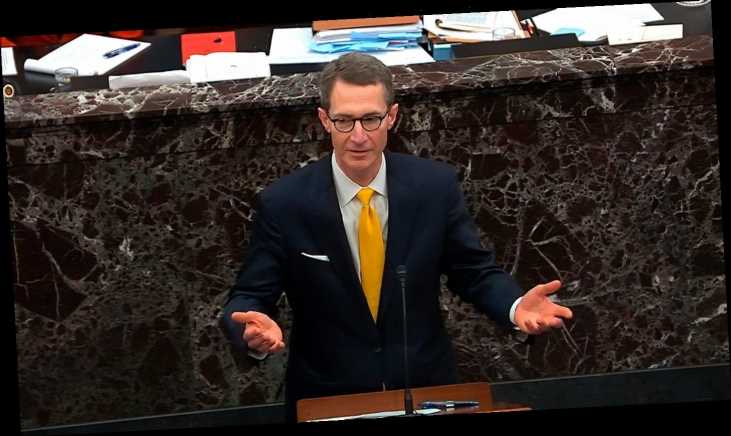 ‘Is that true?’: Here are questions senators asked during Trump’s impeachment trial

WASHINGTON — Senators engaged in the first of two eight-hour question-and-answer sessions in the Senate impeachment trial of President Donald Trump on Wednesday, and by the end of it each side had used its time to counter the other’s opening arguments.

Lawmakers submitted written questions to Chief Justice John Roberts, who read them aloud to the Democratic House managers and Trump’s legal defense team. They had five minutes to respond to questions, which rotated between Democratic and Republican senators.

There were themes. Republicans asked about the anonymous whistleblower whose complaint sparked impeachment, and Democrats wondered how the Senate could do justice without hearing witnesses.

Here are some highlights from senators’ questions:

Concerns over the impeachment and removal process

As expected, Republican senators inquired about the need for the Senate to call additional witnesses and gather evidence while Democrats asked about the president’s right to block key aides from testifying in the House impeachment trial. House managers and Trump’s defense lawyers argued over whether the claims made to resist House subpoenas were legitimate.

Patrick Philbin, a deputy White House counsel said that the president and his legal team offered valid reasons for rejecting the House subpoenas, including that the committees investigating impeachment were not authorized to subpoena for impeachment purposes without a floor vote on proceedings, which did not happen until Oct.31, a claim Democrats have pushed back on.

“The president has ordered the entire executive branch to defy our constitutionally inspired impeachment inquiry,” Jeffries said. “Blanket defiance is what has taken place and he has no right to do that.”

Getting to the bottom of Trump’s motives

Republicans asked questions allowing Trump’s lawyers to establish that Trump was concerned with corruption in Ukraine and the issue of burden-sharing among other countries, which he has repeatedly claimed justify the withholding of aid money and request to look into the Bidens.

Democrats, meanwhile, questioned the evidence to back up those arguments.

Sens. Susan Collins, R-Maine, and Lisa Murkowski, R-Alaska, asked the lawyers whether there was evidence that Trump was worried about corruption before Biden entered the race, which would counter Democrats’ theory he only paused aid in 2019 because of the threat from his political rival in the upcoming election.

Philbin said he didn’t have the full record to be able to say, but pointed to Trump’s personal lawyer Rudy Giuliani’s moves in Ukraine prior to Biden’s entering the race.

Rep. Jason Crow, D-Colo., one of the Democratic managers, said that if the dispute at hand is over a policy difference, rather than Trump’s interest in his own personal benefit, everyone would like to see evidence of that.

With the revelation reported Sunday that Trump’s former national security adviser, John Bolton, wrote in a forthcoming book that Trump told him security assistance to Ukraine was conditioned on investigations he wanted, lawmakers have engaged in a new wave of the debate over whether to call witnesses before the Senate.

Democrats have pushed for Bolton and Chief of Staff Mick Mulvaney to be subpoenaed, a point their questions focused on during Wednesday’s session, while Trump’s legal team warned having witnesses could take a long time. Witnesses Republicans might want to call include the Bidens and the anonymous whistleblower, who Democrats say are irrelevant.

The lawyers said they would call “a long list of witnesses” if they are allowed, which could prevent the chamber from its regular business “for months.”

Philbin criticized the case from House Democrats as “half-baked” and said the prosecutors are asking the Senate to conduct part of their investigation by calling more witnesses.

“There would be a long list of witnesses,” Philbin said in response to the question from Sen. Rob Portman, R-Ohio. “If the body were to go in that direction, it would mean that this would drag on for months and prevent this chamber from getting its business done.”

But the Democratic House managers contended that it was the Senate’s duty to seek out new evidence, especially considering Bolton’s stated willingness to testify.

“When you have a witness as plainly relevant as John Bolton,” Schiff said, “who has volunteered to come and testify, to run him away, to look the other way I think is deeply at odds of being an impartial juror.”

Disagreement over the facts of the case

Senator Feinstein: “The president’s counsel stated that, ‘There is simply no evidence anywhere that President Trump ever linked security assistance to any investigations.’ Is that true?”

Part of the day Wednesday was spent repeating both sides’ claims from their opening arguments over the last several days. At odds between the two teams, among other points: Whether Ukrainians knew that aid was being withheld before a late August article alerting them to the fact; whether there is evidence that Trump directly tied the money to investigations; and whether Hunter Biden’s role on the board of a Ukrainian company is relevant to impeachment.

Philbin said the House prosecutors hadn’t made their case and hadn’t cited laws the president broke.

House Manager Rep. Jason Crow, D-Colo., said there was “overwhelming evidence” aid was withheld to pressure Ukraine to open investigations. Democrats presented a slide labeled “Bogus Explanation: There Is No Direct Evidence” as Crow walked senators through some of the evidence of the aid’s linkage to investigations.

Among several other pieces of evidence, Crow cited a press conference during which Mulvaney initially said Trump had linked aid and investigations into corruption and a DNC server. Mulvaney later walked back the comments.

White House counsel Michael Purpura read a statement from Mulvaney in which he blamed the press for mischaracterizing his words during the press conference and amounted it to a “witch hunt” against the president.

Mulvaney walked back comments: How the Trump White House’s messaging evolved on whether there was a Ukraine quid pro quo