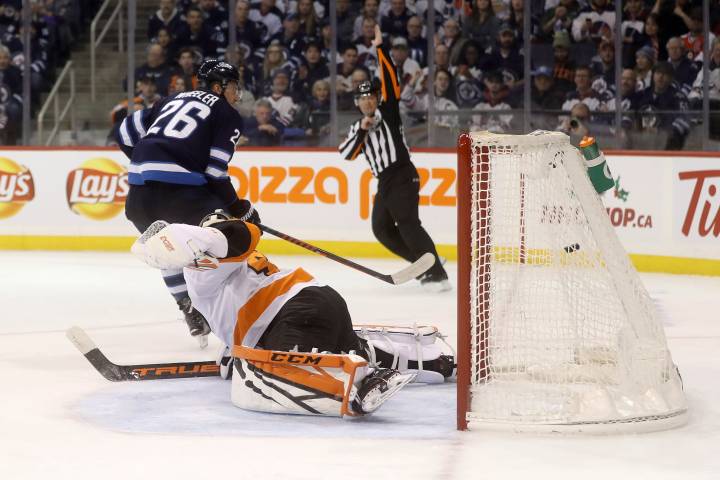 After a tough start to the four game homestand, the Winnipeg Jets bounced back on Sunday with a blowout victory over the Philadelphia Flyers. While it hasn’t been pretty some nights, the Jets are still managing ways to get the two points, even when they’re not at their best.

There haven’t been many nights this season where the Jets have put it all together for a full three periods, but time and time again, they’re still finding ways to win.

“No team in the league has ever done that, or will do that. But the teams that can play bad, and still get a point or two, are the teams that are going to get far.”

Sunday was another case of the two-faced Jets.

After they were badly outshot 17-6 in the first period against the Flyers, the Jets looked like a vastly superior team the rest of the way as they broke out for three goals in the middle frame.

“That’s gonna tell something about the team we have here,” forward Patrik Laine said. “It’s really special. Obviously after a period like this we were able to turn it around and play pretty good hockey for the next 40 minutes. That’s a sign of a good team.”

With five wins in their last six games, the Jets are now just a single point out of first place in the tough Central Division. And they’ve been doing it all different ways. From blowout wins, to comeback victories, to just hanging on at the end, the feeling around this group is every game is winnable.

“I think if we play our game, no matter who we play in this league, I think we got a pretty good chance of winning,” forward Kyle Connor said. “I like our odds.”

Next up for the Jets is a date with the slumping Chicago Blackhawks on Tuesday. The Hawks are in last place in the Western Conference and still haven’t won since the Jets beat them at the end of November, now mired in a seven game losing streak.

“We got to go out and play the exact same way we did in the last two periods yesterday,” Ehlers said.

Defenceman Joe Morrow continues to practice in a non-contact uniform and will not suit up against Chicago. Forward Mathieu Perreault will be a game time decision after he was forced to leave Sunday’s game in the third period with an injury.