Home » Sport » In Off-Season of Restraint, Yankees Close In on J.A. Happ 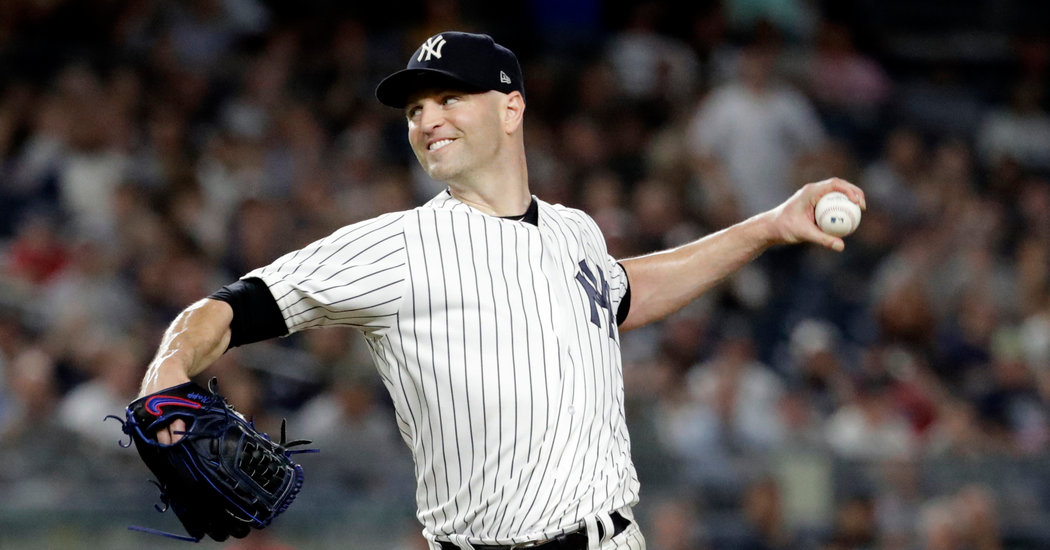 In Off-Season of Restraint, Yankees Close In on J.A. Happ

LAS VEGAS — The last time the Yankees had to stew on the Boston Red Sox winning the World Series, they reacted by going on a free-agent bender — shelling out a total of $458 million for Masahiro Tanaka, Jacoby Ellsbury, Brian McCann and Carlos Beltran five years ago.

Their approach this off-season has been far more restrained.

To fortify their greatest need — their starting rotation — they quickly re-signed C.C. Sabathia for one more season at $8 million, traded for talented but oft-injured James Paxton, and on Wednesday were closing in on landing a familiar face and a dependable arm — the left-hander J.A. Happ.

Happ, 36, who spent the last three months of the season with the Yankees before becoming a free agent, has agreed to the framework of a deal — two years with a vesting option — that had not yet been finalized late Wednesday night, according to a person with knowledge of the deal who was not authorized to discuss it until it is signed.

While the Yankees were unwilling to commit to a six-year contract for their top free-agent pitching target, Patrick Corbin, which would have carried through his age 35 season, Happ’s deal could take him through his age 38 season.

A benchmark for Happ’s deal might be the two-year, $30 million deal that pitcher Charlie Morton agreed to with Tampa Bay earlier on Wednesday.

The two pitchers, both American League All-Stars last season, present an interesting contrast. Morton has been injured frequently, including late in the season when a shoulder injury left his pitches lacking their usual finish, but he was dominant in the 2017 playoffs for the Houston Astros and through much of last season. Morton, 35, went 15-3 with a 3.13 E.R.A. in 2018.

Happ, meanwhile, pitched poorly in his one playoff start for the Yankees last October, but otherwise was an anchor for a staff that was sorely in need of one when he was acquired from Toronto in late July.

Happ was 7-0 with a 2.69 E.R.A. after being acquired, though those numbers may have been slightly flattering. His FIP, or Fielding Independent Pitching — an attempt to measure a pitcher’s effectiveness independent of his team’s fielding — was a middling 4.29.

Still, over the last four seasons, Happ has been reliable wherever he has pitched — whether in Seattle, Pittsburgh, Toronto or New York. In those four years, he averaged 30 starts and went 58-29 with a 3.48 E.R.A.

“He took the ball every five days, he was a competitor — came as advertised, a real pro,” Yankees General Manager Brian Cashman said Wednesday night before an agreement had been reached. He added: “He knew exactly what was necessary and brought it every five days in the most competitive division in all of baseball. He checks all the boxes.”

Cashman said that if he landed Happ, it would not preclude him from acquiring another starter, but that his focus would turn to landing a middle infielder to replace shortstop Didi Gregorius, who is expected to miss between three and five months while recovering from Tommy John surgery.

While the market carries far more second base options — meaning the Yankees would move Gleyber Torres to shortstop temporarily — a more alluring option is Manny Machado, who could play shortstop until Gregorius returns and then slide over to third base. The Yankees are also trying to add to their bullpen.

And while Cashman wondered aloud on Monday why reporters were continuing to ask him about Bryce Harper, the free-agent outfielder, when the Yankees had no need, he allowed on Wednesday — as Harper’s agent Scott Boras suggested — that circumstances could always change.

“If something doesn’t make sense today, it doesn’t mean it won’t make sense tomorrow,” Cashman said. “So all I can keep telling you is you know where my current focuses are, but at the same time we’re a fully operational Death Star.”