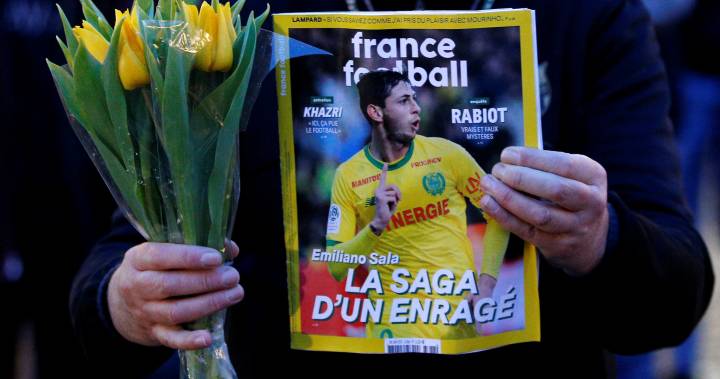 Rescuers said there was almost no chance of Premier League soccer player Emiliano Sala being found alive after a recording emerged of a fearful voice message he apparently sent from his stricken plane before it disappeared over the English Channel.

Rescue teams reviewed satellite imagery and mobile phone data while four aircraft scoured seas off the island of Alderney, where unidentified debris had been spotted. However they suspended their search on Wednesday evening after finding no trace of the missing plane after nine hours of hunting.

Cardiff City’s new signing and the aircraft’s pilot, named on Wednesday as Briton David Ibbotson, had been missing since Monday night and rescuers said chances of finding either of them alive were almost vanishingly slim.

Police said a decision on whether to resume the search would be taken early on Thursday.

“We’re up there looking for stuff that we don’t expect to find,” John Fitzgerald, chief officer of the Channel Islands Air Search, told Reuters. “If there was anything on the surface I think we would have found it on the first night because the weather conditions were really good.”

The 28-year-old Argentina-born forward was en route from Nantes in western France to make his debut for Premier League side Cardiff City.

In a chilling voice message sent to friends, which Argentina’s Clarin newspaper said was authenticated by Sala‘s father, the player expressed concerns about the single-engine Piper Malibu aircraft he was flying in.

“I’m in the plane and it looks like it’s going to fall apart,” he said. “Dad, I’m really scared.”

Britain’s Air Accident Investigations Branch said it had opened an investigation into the disappearance of the U.S. registered aircraft.

Air traffic controllers had guided searchers along the path it took before it disappeared from radar screens at a little more than 2,000 feet (600 metres), Fitzgerald said.

Sala joined struggling Cardiff from FC Nantes last week for a club record fee of about 17 million euros ($19 million), having scored 12 goals for the French club this season.

Both clubs were fearing the worst.

Cardiff City fans laid tributes outside their stadium to a player they barely knew but had built high hopes around.

“Sala a Bluebird. R.I.P. Bro. Big Love,” read one, in reference to the team’s nickname.

In Nantes, supporters laid rows of yellow flowers and held club scarves aloft in the city center late on Tuesday.

Police on Tuesday said the chance of finding survivors was slim and the prospect appeared bleaker a day later, with the water temperature in the Channel barely 10 degrees centigrade (50 degrees fahrenheit).

“There’s no chance. You’d have to be really, really fit to survive even four or five hours in the water,” Fitzgerald said.

He said the pilot had filed a VFR flight plan, which requires aircraft to avoid bad weather, have sight of the ground and stay out of certain air corridors.

The plane had been cruising at 5,000 feet (1,525 m) when the pilot requested to descend to a lower altitude on passing Guernsey. It lost radar contact at 2,300 feet, Guernsey police said.

British media on Wednesday cited Cardiff chairman Mehmet Dalman as saying the club had not organized Sala’s travel plans. “He declined and made his own arrangements,” Mehmet was quoted as saying.